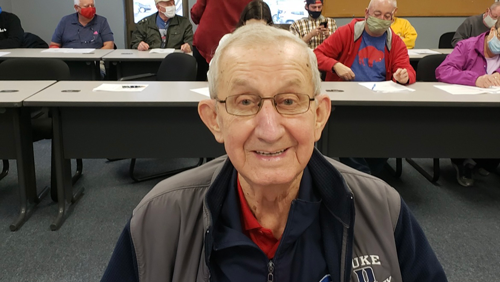 The North Tonawanda Neighborhood Watch announced this year’s Dyngus Day parade will be led by grand marshal David “Bozo” Matecki. While discussing potential candidates, the committee said it was important to “find an individual who truly encapsulates the spirit of Dyngus Day. After a great deal of deliberation, there was really only one person who fit the bill, and his name is ‘Bozo.’ ”

Born July 26, 1937, at DeGraff Memorial Hospital, “Bozo” is a lifelong resident of the Lumber City. Growing up on Sixth Avenue, he and his six siblings were raised by his Polish-American parents and grandparents. Family has always played an integral part in “Bozo’s” life, and it certainly still does. Along with his wife of almost 60 years, Judy, “Boze” (as his many close friends call him) resides only a few blocks from his childhood home. He has three children, nine grandchildren and two great-grandchildren – with one more on the way.

“Bozo” attended Our Lady of Czestochowa Church (OLC) primary school until transferring to North Tonawanda High. There, he and close friend, Edy Johns, would go on to become sectional champions in men’s doubles tennis.

After 50 years of employment at Glidden Tools, “Boze” is now happily retired and enjoys spending much of his time with family and friends, attending sporting events around the country with the Gratwick Athletic Club, and working part-time at Deerwood Golf Course.

If you’re looking for “Bozo” and can’t find him at home with family or hosing down carts at the golf course, you will likely find him at the Third Ward Social Club, one of the last remaining Polish American hangouts in the area. Joining the club in 1955 – only eight years after its establishment – “Bozo” is currently one of the longest-standing members (and undoubtedly one of the most loved).

Parade organizers said, “The fact that he is so well-liked should come as no surprise, and can be corroborated by anyone that knows, or has met ‘Bozo’ even once – and there are many. With his friendly, loving, easy-going demeanor and ability to strike a conversation with anyone, anywhere, he’s simply a hard person not to want to be around.”

When asked to give some insight on what life was like, growing up on the Avenues, “Bozo” said life was good, and it was a simpler time. His family never owned a car, as the bus went everywhere. They were able to do all their shopping on Oliver Street, as well as attend church at OLC and socialize at bars like Topolski’s where they would frequently go to dance.

Organizers added, “One of the reasons for starting our Dyngus Day celebration was to bring attention and life back to an area that holds immense cultural significance in our city. We believe ‘Bozo’ perfectly represents the history and culture of the community, and are excited to have him leading this year’s parade.”

The NT Neighborhood Watch’s second annual Dyngus Day Parade will be held Monday, April 18. The parade begins at 5 p.m. An after-party with live music, food and drinks will be hosted by Sweeney Hose Fire Co. at Heritage Park.

Groups or organizations that wish to march in the parade can sign-up at www.NTwatch.org.