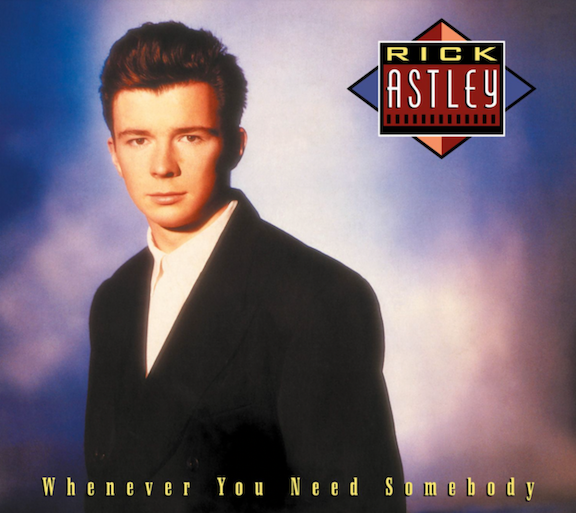 Rick Astley, who has sold over 40 million records worldwide, is enjoying a remarkable career surge – and will celebrate the 35th anniversary of his landmark debut album, “Whenever You Need Somebody,” with a remastered and expanded edition to be released May 6 on BMG.

Astley’s 1987 multi-Platinum debut topped charts in 25 countries and featured one of the most recognizable singles ever – the worldwide No. 1 song “Never Gonna Give You Up” – plus hits “Together Forever” and the title track. Preorder here.

Astley is also featured on a 57-date arena tour with New Kids On The Block, Salt-N-Pepa and En Vogue that kicks off May 10.

A new 4K version of his classic “Together Forever” music video has also been shared.

Astley returned to music in a big way in 2016, with “50.” Entirely written and produced by Astley, the album is certified Platinum, was a No. 1 U.K. hit that sold over 400,000 copies and led to performances on “Good Morning America,” a feature in the New Yorker and far beyond. “Beautiful Life” in 2018 followed, and was a Top 10 U.K. release. Astley has since played with the Foo Fighters; made international headlines for performing the songs The Smiths with Manchester band Blossoms; soundtracked a key late season scene on “Ted Lasso”; launched a lockdown video series that’s amassed 10.3 million views on YouTube with a growing catalog of cover songs (including the just-released “abcdefu”); and two fall 2021 concerts – at London’s Wembley Arena and in Manchester – benefitted the UK’s National Health Service.

While Astley continues to make new music, perform, and pursue new ventures, the resonance of his debut recording never fades. Last year, “Never Gonna Give You Up” achieved a rare milestone in becoming one of 23 music videos from the pre-internet era to hit 1 billion views on YouTube. He has over 6 million monthly listeners on Spotify and is active on social media, where 2.1 million fans follow him on TikTok.

“Whenever You Need Somebody” (2022 Remaster) is a two-CD set and digital release that boasts the remastered original album plus B-sides, remixes, and Astley’s own reimagined versions of the album’s original singles. The set includes an expansive booklet featuring previously unseen photos from 1987-88, liner notes by Craig McLean, and reflections from Astley and two of the original album’s songwriting contributors, Mike Stock and Pete Waterman (of Stock, Aitken and Waterman). The project was remastered at Abbey Road.

Astley said, “Whenever I sing these songs or even hear them on the radio, it brings back so many great memories. It makes me appreciate how lucky I was to have met all the people I worked with around making that first record. ‘Never Gonna Give You Up’ established me in America and let me travel the world – which, for a 21-year-old from Newton-le-Willows, was mind-blowing. I’m still reaping the benefits from that today.”

Just days after the reissue is released, Astley joins New Kids on the Block, Salt-N-Pepa and En Vogue for the 57-date “Mixtape 2022” arena tour. The tour’s launch video was recently trending in the Top 20 on YouTube and features the performers’ tongue-in-cheek romp through milestones of the late ’80s/early ’90s pop music scene. Watch the video for “Bring Back The Time” here.