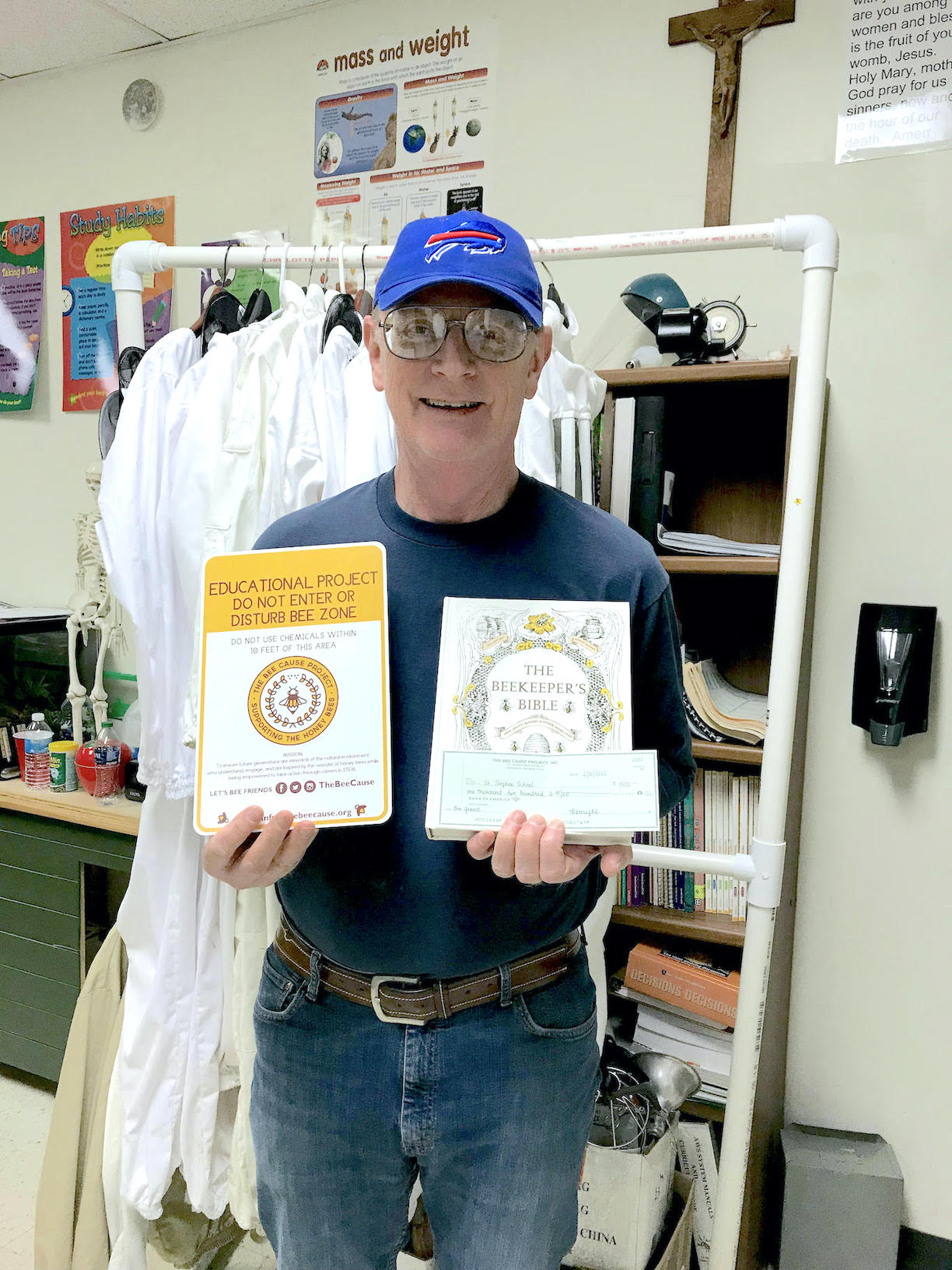 As a young recruit to the U.S. Navy in 1975, Phil Kenline was introduced to beekeeping by a family in Atlanta who “adopted” him.

“I actually started beekeeping after I got into the Navy,” he said. “At my first duty station in Atlanta, Georgia, Dobbins Air Force base, I was on the Navy side of the base. A member of one of the families that adopted me down there was a beekeeper. He got me involved in it. I ended up getting my commanding officer involved in it.

“The only problem with beekeeping in the Navy is that you move often. So, I could keep bees for about three years. Then, I would have to give them to somebody and move on. It wasn’t until I retired in 2005 that we got here that I was able to get into it on a more permanent basis.”

Kenline moved to Akron after retiring from the Navy. He noted wife Emily, a native of New Orleans, is familiar with beekeeping, as her grandfather was a beekeeper. The couple, who belong to the Western New York Honey Producers Association, had no trouble setting up their bee yard because Akron is a right to farm community.

Kenline, who teaches science at St. Stephen School, is doing for his students what his Atlanta family did for him. He is teaching the students in grades one through eight about bees and beekeeping. He formed a beekeepers club that currently has 20 members. This year, his efforts at teaching students about bees and beekeeping resulted in his winning a Bee Cause Grant in partnership with the Whole Kids Foundation. The grant provides a $1,500 Bee Cause resource check, the Beekeeper’s Bible, and Bee Cause educational resources.

“We’ve had the beekeepers club for four or five years now,” Kenline said. “I remember the first year we had bees, we got a package of bees. We went to install them, and, to install them, you have to open them up. Two of the young lads who were in the club that year were right up front. As soon as the bees started flying around, they were headed back to the school. I had to call them back. By the time that we finished with the school year, they were right up there, looking into the hive and helping out. That’s basically what I’m trying to do. Trying to get the kids to not be afraid of bees. It goes to learning a practical skill about something that’s very important: Beekeeping and the pollination that bees and other pollinators provide to put food on our plate.”

The students are getting ready to fill four beehives this year.

“We’re going to start building the hives that you see in the boxes back there,” Kenline said. “All of those pieces are going to turn into a beehive. The first meeting that we had, everybody got to try on the bee suit. When we go out, we can make sure that everyone is covered up and less likely to be stung. They all understand that there is no guarantee that they might not get stung. The parents are aware of that.”

One of the things the grant money will pay for will be more bee suits for the students.

“We have a fair selection of suits and that’s what some of our grant money is going for, to purchase additional. We’ve got some larger students that are taking part, so I’ve got to get small adult suits and things like,” Kenline said.

Principal Lynn Ortiz said she is thrilled Kenline won the grant and is also thrilled Kenline brought his passion for bees to the school. “He has been a huge asset to the school because of his background with the bees. I think that it’s one of the most popular clubs that we have. I put it on Facebook, and we have over 100 ‘Likes’ on it. It’s a great opportunity for the school, too. I hope that Mr. Kenline, when he retires, still comes out and visits us and continues his bee hobby.”

Kenline said students’ families have donated such things as honey extractors, which was donated in honor of Catholic Schools Week. “All of the kids came down and watched as we extracted the honey. Everyone got a little taste of the fresh honey.”

Flow hives were another donation. “Those hives are designed so you open them up,” Kenline said. “You turn a lever, and the honey starts to flow out. It goes right from the hive into the bottle. There’s no filtering or extraction that needs to be done. It’s just incredibly easy to recover. You’re not having the bees flying around. You’re not stressing the bees out. They just go on and do what they normally do.

“What we’ve done in the past is that I’ve had the kids paint the bee hive. If you were to go out and look at the bee hives that we have in the back, the kids painted them up. There are all sorts of designs all over the bee hives. This is the time of year that you can’t really work with the bees, so we’ve got to do all of the other stuff, to get ready for them.”

Students also get hands-on experience in making other products, such as lip balm made with beeswax, a project being done in the fifth-grade classroom. In the life skills program, students learn about foods that can be made from honey, including honey-roasted ham, honey balsamic salmon filet, honey rhubarb ginger fool, all these different things that we can use the honey for.”

Kenline said he is working on ways to raise money to keep the beekeepers club going. “It’s primarily to get the kids involved and interested. We’re going to have at least four hives this year. Hopefully, we will have enough honey to harvest some so they can see what happens when it comes out of the hive. We process it. The kids will be able to taste what fresh honey is like. Whatever surplus we have, we could use it as a fundraiser to make sure that we keep the program going, replacing equipment.”

The club is part of the school’s green mission, Ortiz said. “We’ve had a green club, a recycle club over the years, where we’ve recycled phones, paper, boxes. We will continue that. We teach them from the littlest ones on up about taking care of God’s creation, so even our pre-K 3 might have a garden this year. Every grade has a garden out there.”

Kenline said he hopes the hands-on approach to learning offered by the beekeeper club will encourage students to continue to love science. “I love science. It’s practical, good, down to earth. When we talk about science, we talk about learning. We don’t want you to learn just facts, we want you to learn something so that, when you leave here or you leave high school or whenever you leave school, some of the things that we’re taught you, that you’ve learned will stick with you.”