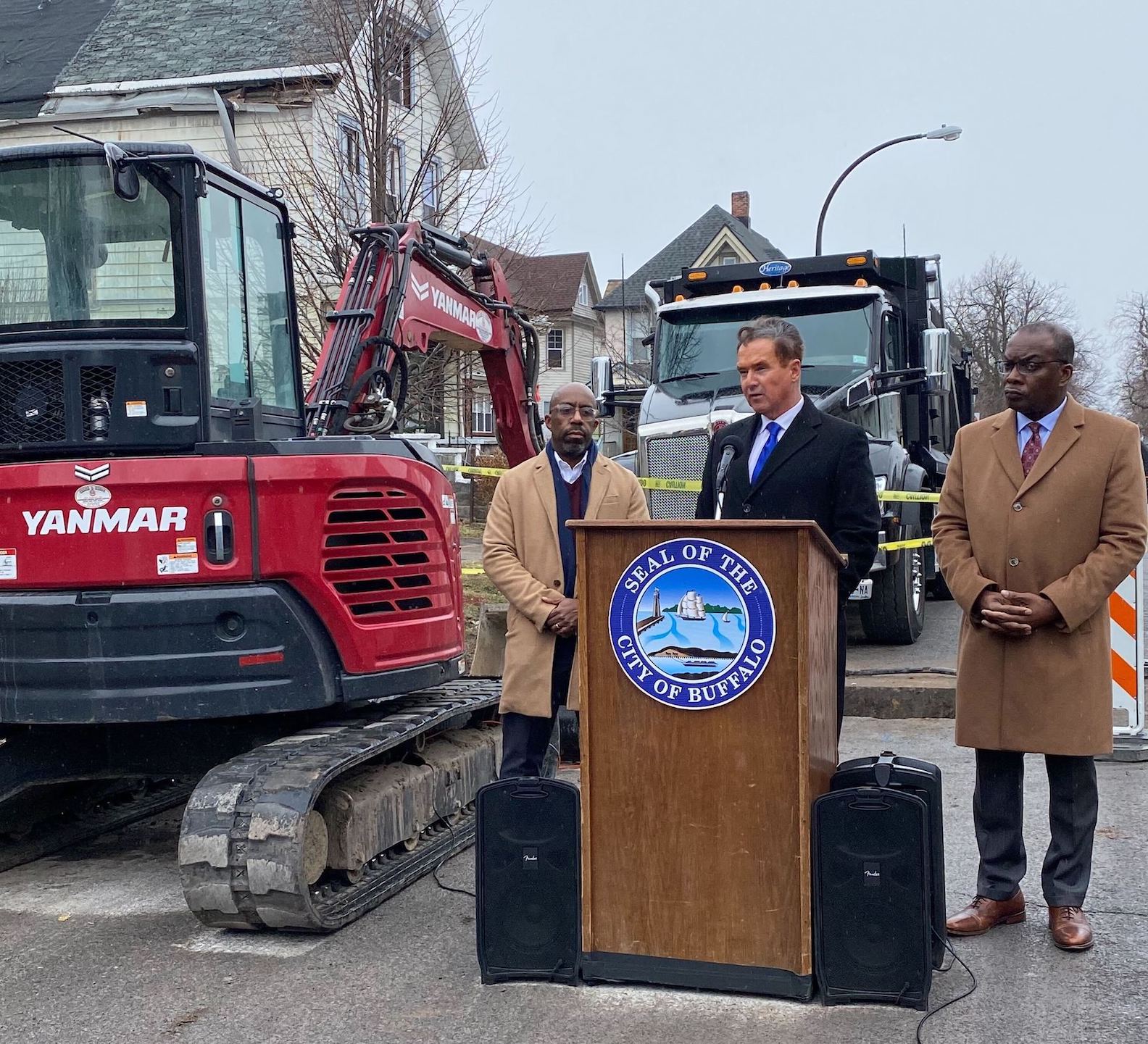 On the one-year anniversary of the signing of the American Rescue Plan law, Congressman Brian Higgins and City of Buffalo Mayor Byron Brown discussed how funding provided through the ARP is making a difference in the lives of Buffalo residents – including a $10 million federal investment in the removal of lead pipes in Buffalo neighborhoods.

“Every household and family in America should be able to turn on the faucet with the peace of mind that the water they are drinking and giving to their children is clean, healthy and lead-free,” Higgins said. “Older communities, including Buffalo and Western New York, are home to aging infrastructure, both the roads and bridges that you can see, and the water and sewer infrastructure that you can’t see under the ground. Millions of dollars in federal investment will put people to work replacing lead water lines here in Buffalo; and completion of these projects will support healthier children, families and neighborhoods across the city and around the country.”

Brown said, “I am proud to stand here on the one-year anniversary of the American Rescue Plan with Congressman Higgins – who continues to be a staunch supporter of our Replace Old Lead Lines (ROLL) program and our efforts to keep our children safe from the dangers of lead. Since the start of this fiscal year, my administration has invested over $1.3 million to replace over 170 lead service lines through our ROLL program, bringing our total investment to date to over $5 million. In addition, the City of Buffalo has committed $10 million from our ARP funds to dramatically increase the number of lead service line replacements over the next couple years. Buffalo is fortunate to have such dedicated and effective partners in Washington.”

The American Rescue Plan included $350 billion in direct aid to state and local governments, which delivered over $792 million to municipalities in Erie and Niagara counties. In letters to the House Transportation & Infrastructure Committee and Energy and Commerce Committee chairs, Higgins called for funding provided to states and localities to support the elimination of lead pipes. The congressman also pushed the U.S. Treasury to make sure lead service lines on homeowner's private property were an expressly eligible use of ARP funds, given the prevalence of lead service lines in Buffalo. The Treasury later provided guidance indicating replacement of lead service lines, faucets and fixtures was among the acceptable use of ARP funding.

The City of Buffalo received over $331 million through the ARP’s State and Local Fiscal Recovery Fund program, $10 million of which will be used for expansion of ROLL. The existing program, implemented under the leadership of Brown, aimed at replacing lead water service lines, improving the quality of the city’s housing, and leading to better health outcomes for children. Prior the pandemic, the city already preplaced the water lines in 500 homes. The funding provided through the ARP will support the replacement of lead lines at an additional 1,000 homes.

Aside from the funding included in the ARP, the bipartisan Infrastructure Investment and Jobs Act dedicates $15 billion in new resources to lead service line replacement. The funding will be distributed through the U.S. Environmental Protection Agency’s Drinking Water State Revolving Fund. In 2022 alone, New York is slated to receive over $115 million specifically for lead pipe replacement.

The EPA estimates up to 10 million lead service lines still exist in older communities across the nation. Exposure to lead can result in negative health consequences, including cardiovascular, kidney and reproductive problems for adults and learning delays, slowed growth, anemia and hearing problems in children.

In April of 2021, Brown joined Higgins for a hearing of the House Ways and Means Committee, providing testimony on the topic of “Advancing U.S. Economic Competitiveness, Equity, and Sustainability Through Infrastructure Investments,” where Brown outlined how infrastructure investments, such as investment in water and sewer systems, “provide the opportunity to grow the economy in an equitable and inclusive way.”

In addition to the replacement of lead pipes, the City of Buffalo is dedicating ARP funding for job training, health equity, community infrastructure, public safety and small business assistance initiatives.