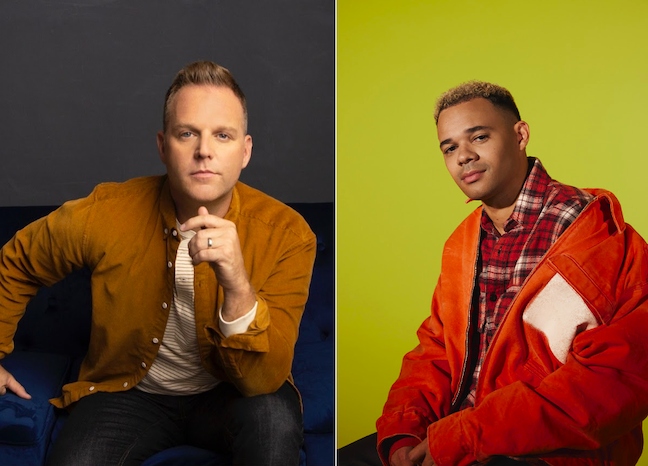 On Thursday, the K-LOVE Fan Awards announced via livestream that reigning ASCAP Christian Songwriter of the Year Matthew West and 10-time Grammy nominee Tauren Wells will co-host the ninth annual K-LOVE Fan Awards taking place May 29 at Nashville’s iconic Grand Ole Opry House. Coca-Cola Consolidated will once again serve as sponsor for the only fan-voted awards show in Christian music.

"I’m looking forward to hosting the K-LOVE Fan Awards again this year, and excited to be joined by my buddy Tauren Wells," West said. "This fan-voted awards show is always a special event where we get to gather together and celebrate how God is working through the hope-filled messages of Christian music. This will be a night to remember.”

“The K-LOVE Fan Awards is always a highlight of my year. Getting to reunite with all the artists I love and respect in our genre, developing deeper connections with fans, and celebrating the God who has given us something to sing about is something truly special,” said Wells, who released his new single, “Fake It,” last week. “This year, I will experience the awards from a different vantage point as a host alongside K-LOVE Fan Awards veteran, Matthew West. He has done such an incredible job and I can’t wait to team up!”

A press release noted, “Fans come from all over the country to participate in the K-LOVE Fan Awards and its preceding weekend to hear great music, meet their favorite artists, and have fun with the whole family – providing an experience for fans that is impossible to match anywhere else. Tickets for the 2022 K-LOVE Fan Awards Weekend are on sale with travel packages still available here: www.klovefanawards.com.”

West is a multi-award-winning artist and songwriter. This past year, he's had five No. 1 songs, including his own multiweek No. 1 song “What If.” He is also this year’s ASCAP Christian Songwriter of the Year, his fourth time with this honor in his career. With several RIAA Gold-certified and Platinum singles to his name, and more than 1 billion streams to his credit, he has also received an American Music Award, a Billboard Music Award, five Grammy nominations, and has been named Billboard’s Hot Christian Songwriter of the Year.

During the pandemic, West released songs such as "Take Heart," "Quarantine Life," "Gobble, Gobble," along with two duets for "Truth Be Told" – one with CMA Awards and ACM Awards winner Carly Pearce, and another version with multi-genre artist Lathan Warlick. West also hosts "The Matthew West Podcast" with new episodes weekly. He is also passionate about providing hope and healing through the power of prayer and story. Along with his father, Pastor Joe West, they founded POPWE, a nonprofit ministry helping others to craft, share and live a more meaningful life. Visit popwe.org and MatthewWest.com.

Through his precise artistry, creative lyrics and dance-oriented performances, Wells uniquely connects his contemporary Christian and gospel sound with elements of pop, hip-hop and R&B. He debuted his solo music in 2017 with the pop hit, “Love Is Action,” which held the No. 1 spot at CHR radio for eight weeks. Soon followed the Grammy-nominated and RIAA Platinum-certified “Hills and Valleys,” a thought-provoking piano and cello-driven track that found a home on Christian airplay’s Top 10 for several consecutive weeks. In 2018, Wells released “Known,” the RIAA Gold-certified single that reached No. 1 on multiple charts, including Christian airplay and Christian AC songs, while garnering him a 2019 Grammy nomination for Best Contemporary Christian Music Performance/Song, and a Billboard Music Award for Top Christian Song. His recent collaboration with H.E.R., “Hold Us Together,” is nominated for a 2022 Grammy Award for Best Contemporary Christian Music Performance/Song, and his album “Citizen of Heaven (Live)” is up for Best Contemporary Christian Music Album. Having toured with the iconic likes of Lionel Richie and Mariah Carey, the consummate performer is currently bringing his high-energy performances and catalog of hits to 40-plus arenas across North America on the Winter Jam 2022 tour. Visit him on Instagram | Twitter | Facebook | Website

Get connected with the 2022 K-LOVE Fan Awards: