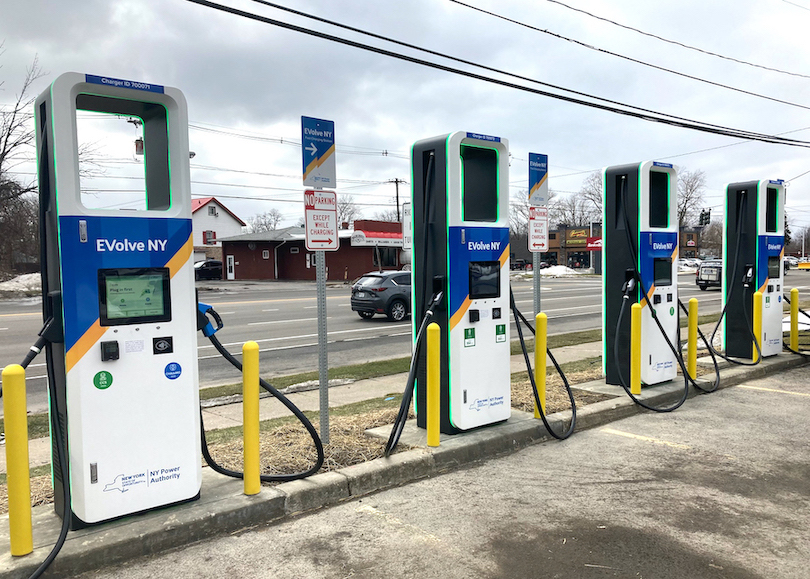 The Direct Current Fast Chargers (DCFC), pictured here, can be used by any make or model of electric vehicle and can recharge most of the battery capacity in as little as 20 minutes. (Image courtesy of the New York Power Authority)

The New York Power Authority on Wednesday announced the first fast charging stations open to any make or model of electric vehicles (EVs) on the U.S. side of Niagara Falls. The four new EV parking lot chargers, installed by NYPA, are at Niagara Consumer Square, 7200 Niagara Falls Blvd., just four miles from Niagara Falls State Park. The latest location brings the number of chargers in NYPA’s “EVolve NY” high-speed charging network to 72 and, NYPA noted, “offers a fast, convenient EV charging stop for travelers visiting the iconic waterfalls or other scenic attractions in the city of Niagara Falls.”

“NYPA’s EVolve NY network is placing high speed chargers throughout New York state, from Buffalo to New York City, so EV drivers can easily travel without worrying about where their next charge will come from,” NYPA Chairman John R. Koelmel said. “Making it easier for people to utilize zero-emission transportation to visit one of the most famous waterfalls in the world and a top New York destination also will help reduce greenhouse gas emissions and bring the state another step closer to a transition to a clean energy economy.”

The Direct Current Fast Chargers (DCFC) can be used by any make or model of electric vehicle, and can recharge most of the battery capacity in as little as 20 minutes.

The Niagara Falls site has three 150kW DCFC stations and one 350kW charger, which is capable of charging a compatible vehicle at speeds up to 20 miles per minute. Two of the charging stations are equipped with both fast-charging connectors, Combined Charging System (CCS) and CHAdeMO systems, so all electric vehicles can plug in and charge.

"Niagara Falls is synonymous with electric power, and now recharging your vehicle here will be as easy as refueling at a gas station," Mayor Robert Restaino said. "We are pleased that our partners at NYPA have added these new Direct Current Fast Chargers to our city."

The city also has 10 public level 2 chargers, which are used for charging during a longer stop.

The Niagara Falls location is one of three Benderson Development sites that will host NYPA fast charging stations. The others are Plattsburgh (operational) in the North Country and Victor in Ontario County in the Finger Lakes, coming this spring.

Gov. Kathy Hochul recently signed legislation setting a goal for all new passenger cars and trucks sold in New York to be zero-emissions by 2035. Supporting “Charge NY,” a New York state initiative to get more electric vehicles on the road, other EV charging and deployment initiatives and programs are designed to get 850,000 zero-emission vehicles on the road by 2025.

NYPA stated, “The new installation also complements the governor’s ‘Make Ready’ program, which will use funding from investor-owned utilities to reach a goal of deploying more than 50,000 chargers by 2025. Such electrification efforts, in collaboration with NYSERDA and the New York State Department of Environmental Conservation and other state and industry partners, will help the state reach its aggressive clean energy goals outlined in the Climate Leadership and Community Protection Act.”

Niagara Falls marks the 72nd fast charger in the EVolve NY network, with 22 more that are already installed and soon will be operational across New York in the next few months. Once the EVolve NY buildout phase is complete, New Yorkers will be able to drive any EV across the state with fast chargers capable of recharging their vehicles in 15-30 minutes located every 50 miles or less.

New York hosts 857 public fast chargers at 200 locations, although they range in speed from 25kW to 350kW, which equates to varying charging times. More than 500 are Tesla-only chargers.

Other EVolve NY sites operating throughout the state include John F. Kennedy International Airport, LaGrangeville in the Mid-Hudson Region, Schodack, Moreau and Saratoga Springs in the Capital Region, Oneonta and Amsterdam in Mohawk Valley, two sites in Syracuse in Central New York, Binghamton in the Southern Tier, Fairport and Geneva in the Finger Lakes, and Watertown, Malone, Schroon Lake and Plattsburgh in the North Country region.