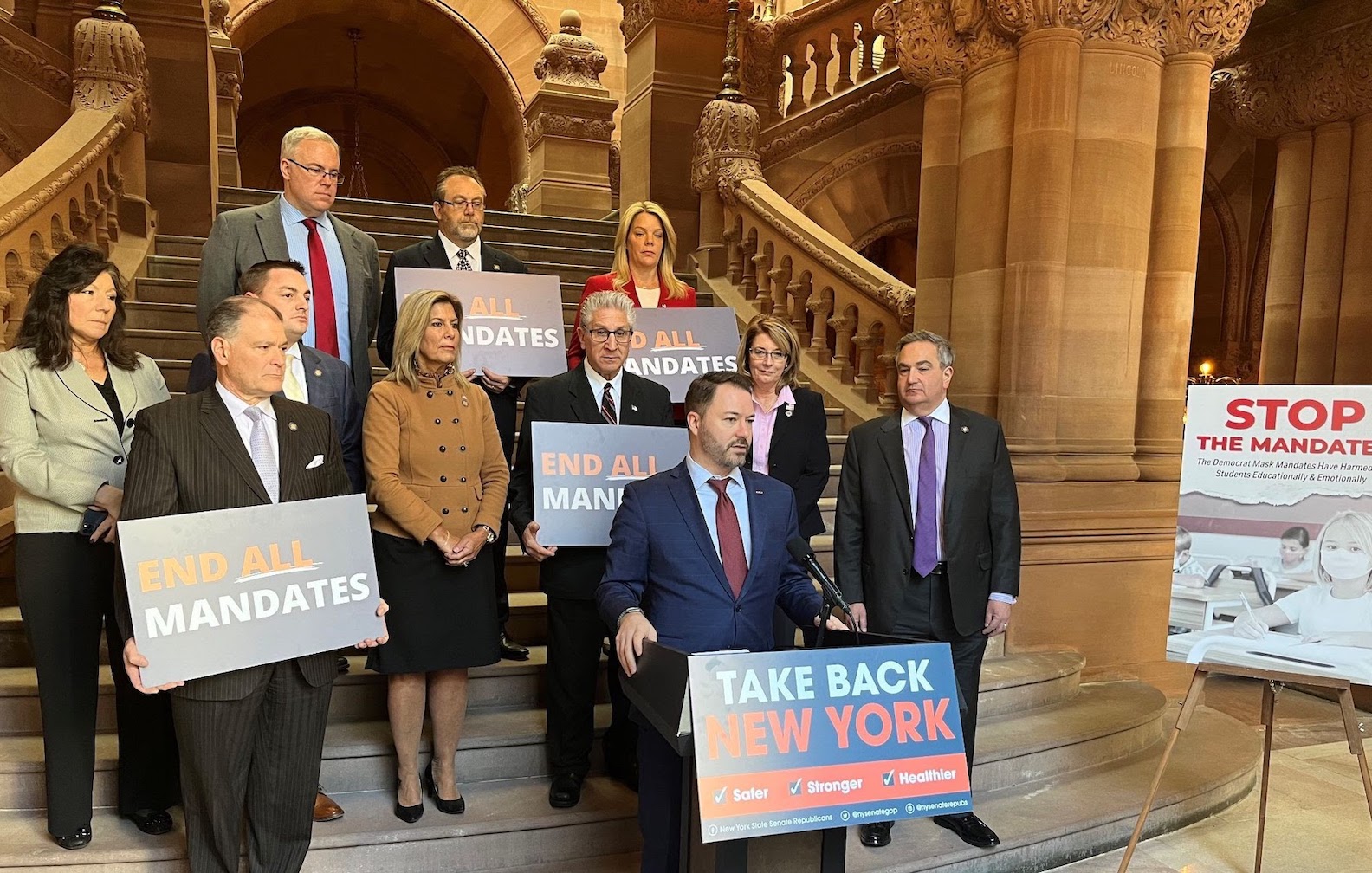 On Monday, New York State Senate Republican Leader Rob Ortt and members of the Senate Republican Conference called for an end to what they called “unconstitutional mandates promulgated by Gov. Kathy Hochul and her Department of Health.” The Republicans announced they would force a vote on the New York Senate floor to end the mandates.

Later in the day, Ortt’s team announced, “Not one Senate Democrat had the courage to stand in support of it. Our conference put this important amendment forward on behalf of the millions of New Yorkers who are beyond tired and fed up with overreaching mandates from Albany bureaucrats.

“This amendment was an opportunity for every New Yorker to learn where their state senator stands on this issue, and it’s clear: Senate Republicans stand with New Yorkers, and Senate Democrats are content to let political science continue to drive the decisions coming out of Albany.”

Ortt’s team also said the vote came “in the wake of the so-called vax or mask business mandate being lifted, but with the mask mandate in schools and childcare centers remaining in place. Children are the least vulnerable individuals with regard to COVID-19, but the most susceptible to psychological damage due to their lives being upended for the past two years.”

The senator said, “School children and toddlers are suffering emotionally. Parents and families are at their wit’s end. New Yorkers are just sick and tired of these one-size-fits-all Albany mandates. I vowed to my constituents that I would fight these unconstitutional mandates until every single one is lifted. I intend to keep that promise, and I am proud to stand alongside my fellow Republicans today to force our Democrat colleagues to explain where they stand. It’s time to end the mandates now.”

State Sen. Mike Martucci said, “When Gov. Hochul substituted her judgment on masks for the judgment of parents, she awakened a sleeping giant. Let's be clear: All the data shows school-age kids are at far less risk than any other group when it comes to COVID. There is absolutely no reason any child should be forced to wear a mask for seven hours a day in school, especially when that same kid can get a pizza, go to a movie or watch a basketball game mask-free. What makes schools such a hotbed for COVID risk but not an arena? Nothing. This is about control, not about public health. All mask mandates must end now. Let’s restore choice and individual judgment and stop baseless political fear mongering.”

State Sen. Daphne Jordan said, “It’s well past time for Gov. Hochul to finally end her mask mandate for school children. Families are fed up, frustrated, and want the governor’s mask mandate removed – and we want New York state to start putting our kids first. While neighboring states including Massachusetts, Pennsylvania, New Jersey and Connecticut all have mask mandate off-ramps, Gov. Hochul's indecision and delay are keeping our kids on a road to nowhere, with no end in sight to her oppressive mask mandates that are doing real harm mentally, emotionally, developmentally and educationally. The people are speaking – and the governor needs to start listening.”

State Sen. Phil Boyle said, “Gov. Kathy Hochul and the State Senate majority have repeatedly said they would ‘follow the science’ regarding mandates. Their maintaining these harmful mask mandates on our students while removing them for almost every other indoor activity proves this was all just political rhetoric.”

State Sen. Patrick Gallivan said, “As I have said in the past, statewide mandates are not the answer. No one individual or agency should have the authority to impose such directives, and it is time to restore our system of checks and balances in government. As more and more constituents call for an end to mask mandates in schools and child care centers, I urge my Senate colleagues to take action immediately to stop such government overreach.”

State Sen. Joseph Griffo said, “Every day, we see the detrimental effects of one-party control, and a lack of checks and balances in state government. We see it in the overreaching mandates put on New Yorkers, the policies pushed and passed by the legislative majorities, and the burdensome regulations and lack of tax relief that have forced residents, families and businesses to flee the state. As I have said throughout the coronavirus pandemic, New Yorkers should be provided with choices instead of mandates. I am hopeful that the Senate majority will agree and finally take action to end the mandates and restore accountability and balance to state government.”

State Sen. Pam Helming said, “We must end governing by mandate. Schools, child care providers, and especially parents deserve to know the path forward. I do not support any action that circumvents the Legislature and gives more power to the governor or state agencies like the Department of Health.”

State Sen. Tom O’Mara said, “The continuation of an irrational and unscientific mask mandate for school children, without a definitive end in sight, continues to define New York as a state under the control of extreme executive order, without legislative checks and balances, and ignoring the dire need for local decision-making. New York state already ranks near the bottom in too many categories of affordability, freedoms, and quality of life. Gov. Hochul is leading us toward the bottom again as neighboring states, and many places across the nation and around the world, are taking bold steps into a post-COVID return to common sense.”

State Sen. Ed Rath said, “My colleagues and I have continually called on the governor to publicize the metrics and benchmarks being used to determine masking in schools. Teachers, parents and students deserve transparency and to understand what the deciding factors are in these decisions regarding our children. Masking has ended almost everywhere except our schools. NYers need answers.”

Last month, the conference called on Hochul to end what they called her “one-size-fits-all Albany mandates, and return to fact-based, collaborative governing.” Additionally, Ortt has called on the governor multiple times to unmask kids.

Last week, Ortt and Senate Republicans penned a letter to the governor criticizing the decision to keep kids masked, and calling for metrics for an off-ramp. Ortt’s team said, “A representative from the Department of Health later confirmed that they have no ‘data targets’ for ending school masking.”

On Saturday, Ortt stood with educators and parents to reiterate his calls for an end to the child mask mandate.

His team added, “A key plan in the Senate Republicans ‘Take Back New York’ 2022 agenda – which the conference has been unveiling since January – is restoring accountability to state government. One of the policies within the plan is to restore checks and balances to the state government.”