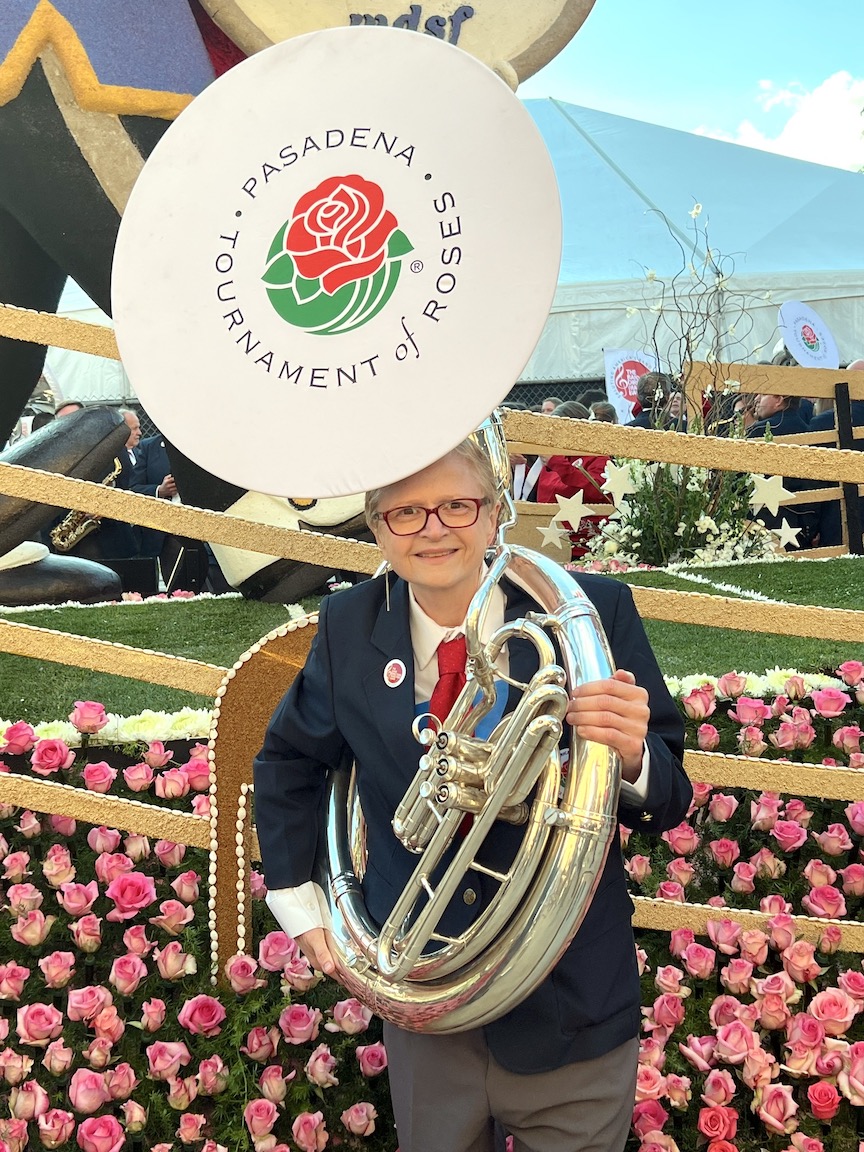 Amy Heist, in uniform and holding the Sousaphone she played with the Band Leaders Marching Band. (Photo courtesy of Amy Heist)

When Amy Heist was in seventh grade in Grand Island’s middle school, she surprised her parents by bringing a Sousaphone home from school.

“Back in the day when I was a kid, girls didn’t play tubas,” Heist, who lives on Grand Island, said. “Girls didn’t play drums. Boys didn’t play the flute. So, I could not convince a band director to let me play the tuba until I got a very special band director in seventh grade to listen to me, that there was nothing in the world that I wanted to play except the tuba. His name was Fred Eager. He gave me a Sousaphone. I dragged it home. I didn’t tell my parents or get their permission. I surprised my mother at the door with a Sousaphone. I’d been playing piano since the fourth grade and I’d been singing in church choirs since first grade, so they knew that I had a strong interest in music. But I don’t think that they were ready for the Sousaphone.”

The Sousaphone is “a large instrument with a big bell above my head,” Heist explained.

A year later, Heist, still in middle school, was recruited to play the tuba in the high school wind ensemble. She went on to have a long career as a music educator and band leader, and is now retired from the Niagara Falls school system.

Heist’s adventures as a musician have not ended with retirement, however.

“One evening, I was sitting in my house, and I was looking on Facebook, and I saw an advertisement for this band called ‘The Band Directors Marching Band,’ ” she said.

The plan was for this band to perform at the Tournament of Roses parade, prior to the Rose Bowl, in Pasadena, California, on Jan. 1, 2021, with a group of 270 band directors. Due to the COVID-19 pandemic, the parade was canceled. Plans were then made for the band directors to march in the 2022 parade. Heist applied to be part of the band, and she was accepted.

The parade was partially sponsored by the Michael D. Sewell Memorial Foundation. Sewell, who retired after a long career as a high school band director in Pinkerington, Ohio, passed away in 2017 at the age of 59 as a result of complications from diabetes. His wife, Karen Sewell, established the foundation, which raises money to support the arts in Pinkerington. The motivation for the Band Directors Marching Band was a comic strip that has appeared in newspapers since 1973, called “Funky Winkerbean.” In Tom Batiuk’s comic strip, there is a character named Harry L. Dinkle, who proclaimed himself to be the world’s greatest band director.

“He’s always getting into trouble. He has turkey sales to raise money for his marching band. It’s never successful, and it’s always causing problems for Harry Dinkle. It’s the 50th anniversary of ‘Funky Winkerbean’ and Harry Dinkle. So, that was the impetus for the Band Directors Marching Band,” Heist said.

Late in December, Heist traveled to Pasadena to be a part of the band that was directed by Jon Waters, director of bands at Heidelberg University in Ohio. She described the whirlwind event that brought 280 band directors from all over the U.S., as well as from a few foreign countries, together to perform in several events, in addition to the parade.

She said that rain forced several of the rehearsals indoors. On the first night she was in California, “We got together in a ballroom of our hotel,” Heist said. “The minute we played together, it sounded glorious and harmonious. The next day, we were supposed to practice outside. We went to Arcadia High School and it was raining again, so we practiced in the auditorium of the high school.”

The four pieces of music that the band performed were “Seventy Six Trombones” from “The Music Man,” by Meredith Wilson; “Sing, Sing, Sing,” by Benny Goodman; “Stars and Stripes Forever,” by John Philip Sousa; and “Strike Up the Band,” by George Gershwin and Ira Gershwin.

On the third day, the group practiced outside in the rain “because we had a performance later that day at Band Fest, which is a festival for high school bands to perform their band shows and compete against each other,” Heist said. She explained the band directors band was performing as a showcase and was not competing against the high school bands.

“I played the Sousaphone. The rain would just pour down from the bell, into my face. You just stand there playing, and you don’t let the rain bother you. Basically, we got soaked through to our skin. But we had a blast. We loved it. It wasn’t very warm. It was only about 45 degrees. We were cold and wet, but we were still happy. After Band Fest, we got to take in another California treat. The In-N-Out Burger. I couldn’t believe that they served us all hot food so fast. We all ate underneath the parking garage. We looked like drowned rats, because we didn’t have hats on.”

On the fourth day, the band practiced marching on streets that had been blocked off with cones. The Band Directors Band did something that no other band had ever done in the history of the Tournament of Roses parade. It was marching with a float. The band had to practice a maneuver in which the group split in two groups just prior to the float coming through the middle. After the float passed by, the band closed up again.

The timing had to be very precise, Heist said. And, because of that, the band had an extra opportunity to perform, when, on the day prior to the parade, all of the floats were judged at the site where the floats were constructed. “

Because our band and the float were a complete unit, the band had to be there to be judged with the float,” Heist said. “When the judges came, we had to play a song with our float. It’s kind of weird, but it was the first time in 133 years of the Tournament of Roses parade that there was a band and a float that were coordinated together. We felt like we were being trend setters. We won the Showmanship Award.”

After a last practice session on the day of New Year’s Eve, the band that only had 10 hours of rehearsal as a complete unit was ready to perform at the parade.

Performers traveled to a holding area by bus, in uniform and carrying their instruments, early in the morning. After several hours of waiting and moving from one holding area to the next, they were ready to start marching. Before long, they had arrived at a corner known as “TV Corner.” It is called that because, according to Heist, 50 to 100 television cameras are set up at that corner in Pasadena. Playing the Sousaphone at TV Corner was very exciting, Heist said.

“It was such a natural high,” she explained. “I’ve done some amazing things with children. I’ve had students who’ve played on the Grand Old Opry stage, but that wasn’t me performing. That was students. They’ve played on the steps of the Lincoln Memorial in Washington, D.C. All over the place, I’ve had students perform. As for me performing, I would say that this was the absolute highlight of my performing career.”

The entire parade route was five-and-a-half miles long. Heist said that, unfortunately, she was unable to participate until the end of the parade. After she walked, playing her instrument, for three-and-a-half miles, she noticed she felt dizzy and shaky. She said she was “sweating profusely” and was “generally unwell.” At that point, she had to drop out of the parade, and she was taken to the Huntington Hospital in Pasadena, where it was discovered she was severely dehydrated.

“My heart enzymes were off,” Heist said. She later found out that Synjardy, one of the medications she takes for diabetes, can cause severe dehydration upon exertion. She said she was one of 10 people in the band who had to drop out.

“One guy got run over by a scooter,” Heist said. “They have these little scooters with men and women in white suits, who are part of the Tournament of Roses parade. They zip around to make sure that everything is going OK. And he zipped around and ran in the back of Manny, one of our Sousaphone players, knocked Manny over, broke two of his vertebrae, and the scooter rider knocked himself unconscious when he hit the ground.”

When Heist was released from the hospital, 10 hours after she arrived, a nurse, who had played the trumpet in school bands from fourth grade to college, “put on the Sousaphone and began to march down the hall with the Sousaphone, singing. It was hysterical. She was a real trouper because that Sousaphone’s heavy. She marched right out the door and put it in the car of the lady who picked me up. In fact, it was Mrs. Sewell, Michael D. Sewell’s wife. I was so thrilled that it was his wife who picked me up. I got to meet her and have a conversation with her, all about her late husband and about how wonderful a man he was. He was a diabetic, so she understood my problem with diabetes. The trip to the ER didn’t dampen my spirits for the whole trip. It was too wonderful for a trip for that to bother me. I made it for three-and-a-half miles. I made it through TV corner. I played a lot.”

When asked what she would tell students about playing musical instruments, Heist said, “I would say that it’s important thing to have music in your lives. It may not become your vocation, but learning music and having it as a part of your life can be an avocation, whether it’s playing in a community band or just having had that experience of having learned an instrument.”

Playing instruments can open up opportunities for students. “It can lead to really great things. You never know where your playing will lead you,” Heist said.

The logo for the Band Directors Band was “Saluting America’s band directors. We teach music. We teach life.”