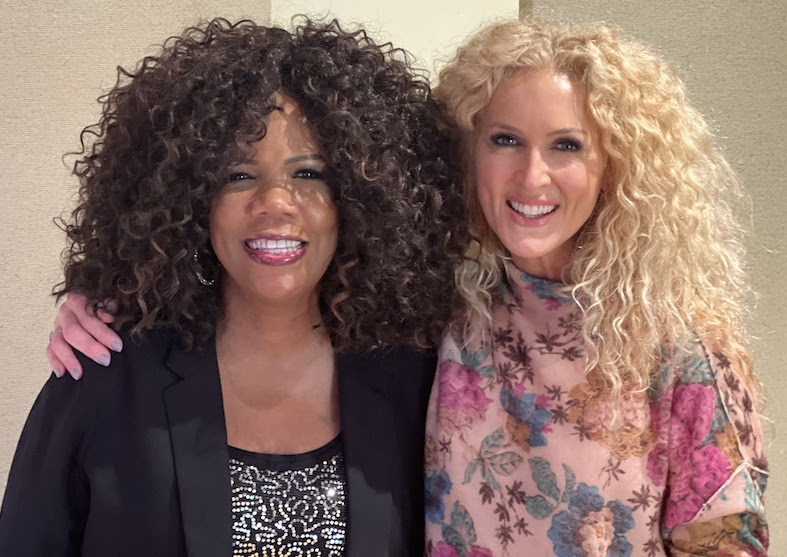 Lynda Randle, left, and Kimberly Schlapman are pictured in the studio during the recording of "Give Me Jesus." (Image courtesy of Turning Point Media Relations)

Lynda Randle & Kimberly Schlapman join forces to 'Give Me Jesus'

Powerhouse vocalists each in their own right, Dove Award-winning Gospel singer/songwriter Lynda Randle and Kimberly Schlapman, a founding member of Grammy, Emmy, ACM, CMA and AMA award-winning country supergroup Little Big Town, have joined forces for the first time to deliver a soulfully impassioned new rendition of the beloved American spiritual “Give Me Jesus.”

Among the anticipated album’s seminal tracks, “Give Me Jesus” encapsulates one of Randle’s principal missions: to encourage unity and reconciliation while extending the hope of Christ to all people.

“As my sister in Christ, Kimberly was such a wonderful addition to this song and a beautiful visual of how the Lord brings people together,” Randle shared of the collaboration. “Her heart is to love her neighbor as herself and to be a bridge-builder. I share that passion, and it’s something we both know only Jesus can do. He is the one who will span the great divide and bring our world together. It’s time to heal, and I hope this song can bring us all a little closer to that.”

She added, “The message of 'Give Me Jesus' is so important to me. Even though the world seems to have a lot to offer and there are so many things vying for our attention, at the end of the day, Jesus is the answer. Growing up, my parents didn’t have a lot of material things to give us, but they did give us Jesus. His love has carried me through my life, and it will carry me through until the day I see him face to face.”

Releasing Feb. 11, “Pilgrim Journey” marries gospel, soul, blues and Americana soundscapes with Randle’s signature warm, rich vocals on new arrangements of popular Inspirational classics and spirituals, as well as original selections. Alongside “Give Me Jesus,” highlights of the album include “I Want Jesus To Walk With Me,” a duet with Grammy Award-winning multi-instrumentalist, vocalist and producer Tommy Sims (Eric Clapton, Sting); the debut single, “Plenty Good Room,” which has landed on Spotify’s New Music Friday Christian and “Healin Blues” playlists, among others; and the stirring “Motherless Child Medley,” a fan-favorite from Randle’s repertoire.

Singer/songwriter, author, speaker and television personality Randle is one of Christian music’s most distinct voices. A familiar face at Gaither Homecoming events and on Homecoming videos through the years, her arrangement of “God On The Mountain” is the most popular video on the GaitherTV YouTube Channel with over 57 million views. Garnering a Dove Award for her 2004 recording, “A Tribute To Mahalia Jackson,” Randle has performed at a Billy Graham Crusade; was among the official entertainers for the 98th National Christmas Tree Lighting Ceremony in 2020; and has appeared at events featuring such musical legends as Andraé Crouch and Gladys Knight, among others. Randle and her brother, Grammy-winning dc Talk founding member and Newsboys frontman Michael Tait, headline the popular “Together For Christmas Tour” each year, and Randle is the creator and host of the annual “A Woman After God’s Own Heart” conference.

One of the largest independent Christian music companies in the world and a household name for millions of fans, Gaither Music Group, in partnership with Primary Wave Publishing, is known worldwide for its award-winning and top-selling recordings, including the “Gaither Gospel Series,” of which 133 products have been certified Gold, Platinum or multi-Platinum. These recordings, which encompass more than 177 video copyrights, showcase gospel music pioneers; many of the finest performers in the gospel genre; up-and-coming acts; and country artists including The Oak Ridge Boys, Jimmy Fortune, Joey+Rory, Alabama, Alan Jackson, The Statler Brothers, George Jones and Vince Gill. The brand has partnered with Sandi Patty, Gloria Gaynor, Steven Curtis Chapman and a host of acclaimed talents from various fields of music. Gaither Music Group has garnered sales of more than 40 million DVDs and CDs, including such PBS stalwarts as “Billy Graham: God's Ambassador,” the only authorized video autobiography of Graham; “The Gospel Music of Johnny Cash”; and three Elvis Presley projects, in conjunction with the Elvis Presley Estate. The company developed a strategic partnership with Cracker Barrel Old Country Store in 2008; and its alliances with Capitol Christian Music Group, Virgin Music Label & Artist Services, Universal Music Group and Time Life Music remain bedrocks for the company.