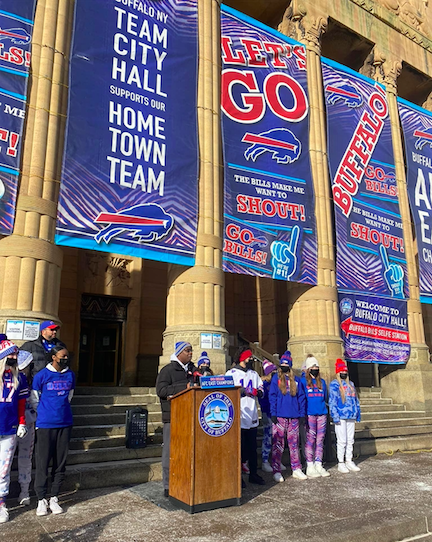 The Buffalo Bills banners at City Hall. (Photo provided by the Office of Mayor Byron Brown)

Buffalo Mayor Byron Brown on Tuesday reminded Buffalo Bills fans to visit the Bills AFC East championship banners, which are now hanging from the City Hall portico to celebrate the team as it continues a playoff run.

“The seven vertical banners serve as a great signal to the city, and to the world, that the Bills are back as AFC East champions and serious playoff contenders! We are proud of our Buffalo Bills, and by reinstalling the banners as a signature selfie station, we hope fans from across Western New York come to City Hall and take outdoor, socially distanced photos to safely commemorate another historic Bills season,” Brown said.

In partnership with the Division of Citizen Services and the Buffalo Police Department, Brown is also calling on Bills fans who plan to stop by the “selfie station” to take part in the Dr. Martin Luther King Jr. Day of Service winter clothing drive.

New coats, gloves, hats, scarves and socks are being collected until Feb. 1 to help city residents in need this winter season. Donation bins are located inside the City Hall lobby. Clothing can be dropped off from 8:30 a.m. to 4:30 p.m. weekdays.

Winter clothing donations can also be dropped off at Buffalo’s five police districts:

“Team City Hall” has also erected a banner in the lobby to congratulate the Bills on their success so far. The City Hall dome and BuffaloLIT participants will be lit up in “Bills Blue” each night through Sunday, Jan. 23, to show community support to the team.