Pete Mazenauer of Tempe, Arizona, passed away peacefully at home on Dec. 18, 2021, at the age of 75. He was born and raised on Grand Island; attended Sidway School, Class of 1961; and was a member of the Grand Island Jaycees in the early 1970s.

He thoroughly enjoyed growing up on the Niagara River, with winter season ice sports and summer season swimming and boating. Pete easily made friends and was involved in starting “Gear Jammers,” a town youth car club.

He was in the automotive business for most of his career, from sales representative to dealership general sales manager, ending his career as a national sales trainer for dealerships throughout the U.S.

After retiring, he became a student at Arizona State University, and enthusiastically participated in student life for many years. He then became an academic mentor to ASU student-athletes, a role that he truly cherished.

A loving and devoted family man, Pete was preceded in death by his parents, and by his son, Martin. He is survived by his wife of 41 years, JoAnn; and three children: Michelle Ponzo (Marcin), Jason and Matthew (Megan). He is also survived by four grandchildren: Jordan, Logan, Landon and Hazel; along with his brother, Arthur “Skip” Mazenauer (Judy). 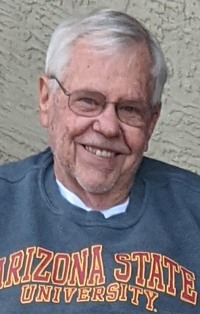