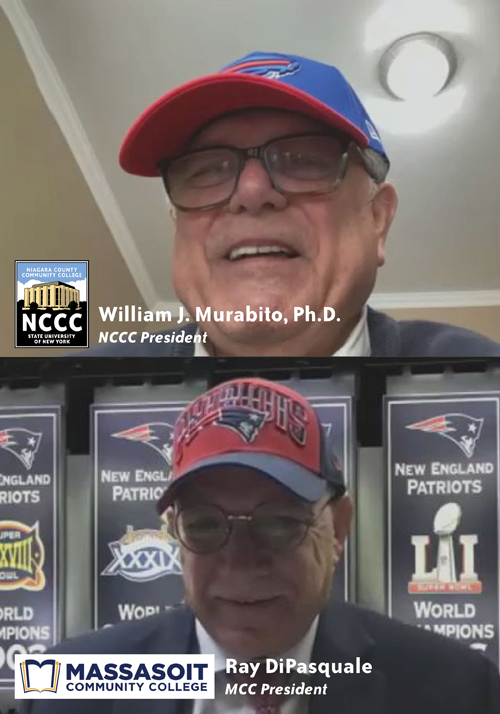 Not one to be outdone, Murabito confidently sported a Buffalo Bills hat in support of the hometown team – and made a wager of chocolate orange sponge candy handcrafted by students at the Niagara Falls Culinary Institute, a division of NCCC.

This Western New York specialty will be sent to Massasoit in the event the Bills lose on Saturday night – though Murabito taunted, “I don’t expect a need to send those to you.”

Amused by the comment, DiPasquale gestured to the Patriots background behind him and said, “See those championship banners?” Though he noted his confidence in New England’s rookie quarterback, Mac Jones, DiPasquale offered gourmet chocolates created by students in the MCC culinary program as his part of the wager – should the Patriots be defeated.

Certain of a Buffalo Bills victory, Murabito announced, “We are looking forward to those chocolates!”

One thing both presidents agreed upon is that it would be a great game between the two rival teams. While the weather forecast is expected to be incredibly cold in Orchard Park for the game, the sweet wager between the two colleges is just an example of the warmth of the fans behind each team.

Buffalo and New England split their two-game season series, with each team winning on the other’s home field.