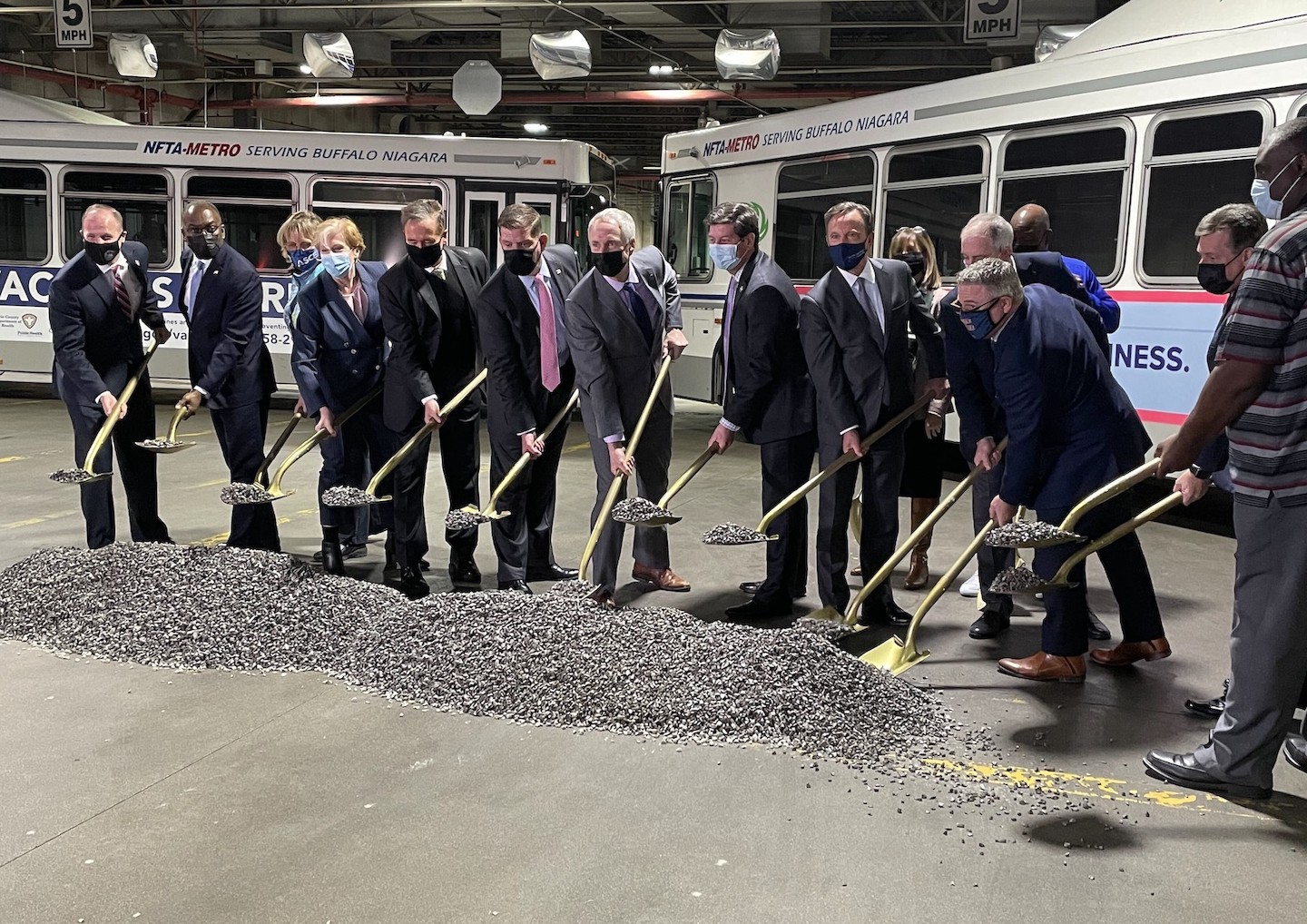 “This project is an example of the transformative investments the bipartisan infrastructure law will create in Western New York and across the country,” Walsh said. “The Biden-Harris administration is committed to fighting the climate crisis and supporting our nation’s public transit systems – all while creating quality, good-paying jobs.”

Higgins said, “There is a significant multiplier effect that comes with infrastructure investments, prompting private sector investment and creating jobs both during the construction phase and over the long term. The bipartisan infrastructure law will be a game-changer for older communities like Western New York, having a transformative effect on neighborhoods and people’s lives.”

Leaders broke ground on an $8 million upgrade to the NFTA’s Metro’s Cold Spring bus facility in Buffalo, which they said will pave the way for state-of-the-art battery electric buses. They noted this project centers on safe and efficient charging equipment for electric buses, as well as their maintenance. The new infrastructure will be ready in spring of 2022, just in time for Metro to take delivery of its first 20 electric buses.

Funds supporting this project came from New York state, the Federal Transit Administration and National Grid. The latter, along with the New York Power Authority, have added their expertise to the design and construction of the facility upgrades.

“We are very proud of this project,” NFTA Executive Director Kimberley Minkel said. “It is a significant environmental investment that benefits the entire region.”

In addition to investments in roads and bridges, the bipartisan infrastructure law makes the largest investment in public transit ever, provides $25 billion for airports, $5 billion for clean busses and $7.5 billion for a network of electric vehicle charging stations.

"This historic federal law has provided our state and our country with a once-in-a-generation opportunity to make a massive investment in our infrastructure, and that includes developing innovative approaches that advance and align our state's progressive transportation and environmental agendas," said New York State Sen. Tim Kennedy, chair of the Senate Transportation Committee. "Today's groundbreaking is a prime example of the kind of victories we can deliver through strong partnerships at every level of government."

Sam Capitano, business manager for Upstate New York Labors International Union of North America (LIUNA), added, “America’s next industrial revolution is in renewable energy industry and electric power. The bipartisan infrastructure law is the conduit to create this revolution. Thanks to Congressman Higgins and to our friends in Congress, this law will continue to grow the greatest middle class the world has ever seen. With the help of Secretary Walsh, the construction industry is ready to get to work. If you’d like to be a part of this, please consider the building trades as a career – we’re going to need you!”

Higgins’ team said New York is expected to receive $11.6 billion in federal highway aid and $1.9 billion in bridge repair funding through formula allocations alone. The state will also be eligible to apply for more in competitive grant funding. Another $2.6 billion will replace lead pipes to ensure clean drinking water for New Yorkers and $100 billion will expand broadband access across the state. New York airports will see an investment of $685 million, and $9.8 billion will support public transportation improvements. New York residents will also receive $3.5 billion toward weatherization to reduce home energy costs, and the state will see a minimum of $175 million for investments to expand electric vehicle charging stations.

Erie County Executive Mark Poloncarz said, “The recently passed bipartisan infrastructure law will have a profound positive impact on Erie County and on communities across the country, making long-overdue investments that will benefit Americans for generations to come. Substantial investments in road and bridge infrastructure, cleaner public transit alternatives such as the electric bus charging station we are announcing today, and billions in funding for expanded broadband access are just a few of the ways that peoples’ lives will be impacted. I thank Congressman Higgins for his unswerving advocacy for our region and for helping to pass this critical Law.”

Mayor Byron Brown said, “I thank Secretary Walsh for making time in his very busy schedule to visit and welcome him to the City of Buffalo. The City of Buffalo has a true partner in the Biden-Harris administration. The $1 trillion infrastructure bill, signed into law in November, will bring much-needed construction and repair funding to the City of Buffalo. The infrastructure bill also directs $39 billion into public transit systems, benefiting facilities like the NFTA’s Cold Spring garage. These historic investments will allow us to modernize our utilities, invest in roads and bridges, and create good-paying, union jobs.”

New York State Sen. Sean Ryan said. “The upgrades at the NFTA Cold Spring facility mark a significant milestone in Western New York’s transition to an electric future for public transit. Moving away from diesel bus fleets is a prime example of the type of large-scale, institutional measures our state must continue to take to help counteract the effects of climate change. Investing in infrastructure is also a proven way to boost the economy, and I thank President Biden, Secretary Walsh and Congressman Higgins for working so diligently to deliver for WNY. The bipartisan infrastructure law will provide funds to help our region make major infrastructure improvements like replacing lead pipes and repairing our roads and bridges.”

A press release said, “The American Society of Civil Engineers (ASCE) 2021 Report Card for America’s Infrastructure, gives both the U.S. and New York state a poor grade of C-. Approximately 27% of New York roads are categorized to be in poor condition, and 10% of New York bridges are deemed structurally deficient.”

Maria Lehman, international president-elect of the American Society of Civil Engineers and director of U.S. Infrastructure for GHD, added, “IIJA is the largest investment of physical and natural systems in American history. It is the first step in rebuilding critical infrastructure in an equitable manner. I am confident that, when we look back at what was done, not only will the infrastructure grades improve, but we will recognize this moment in time as the pivot to a more sustainable economy for all.”