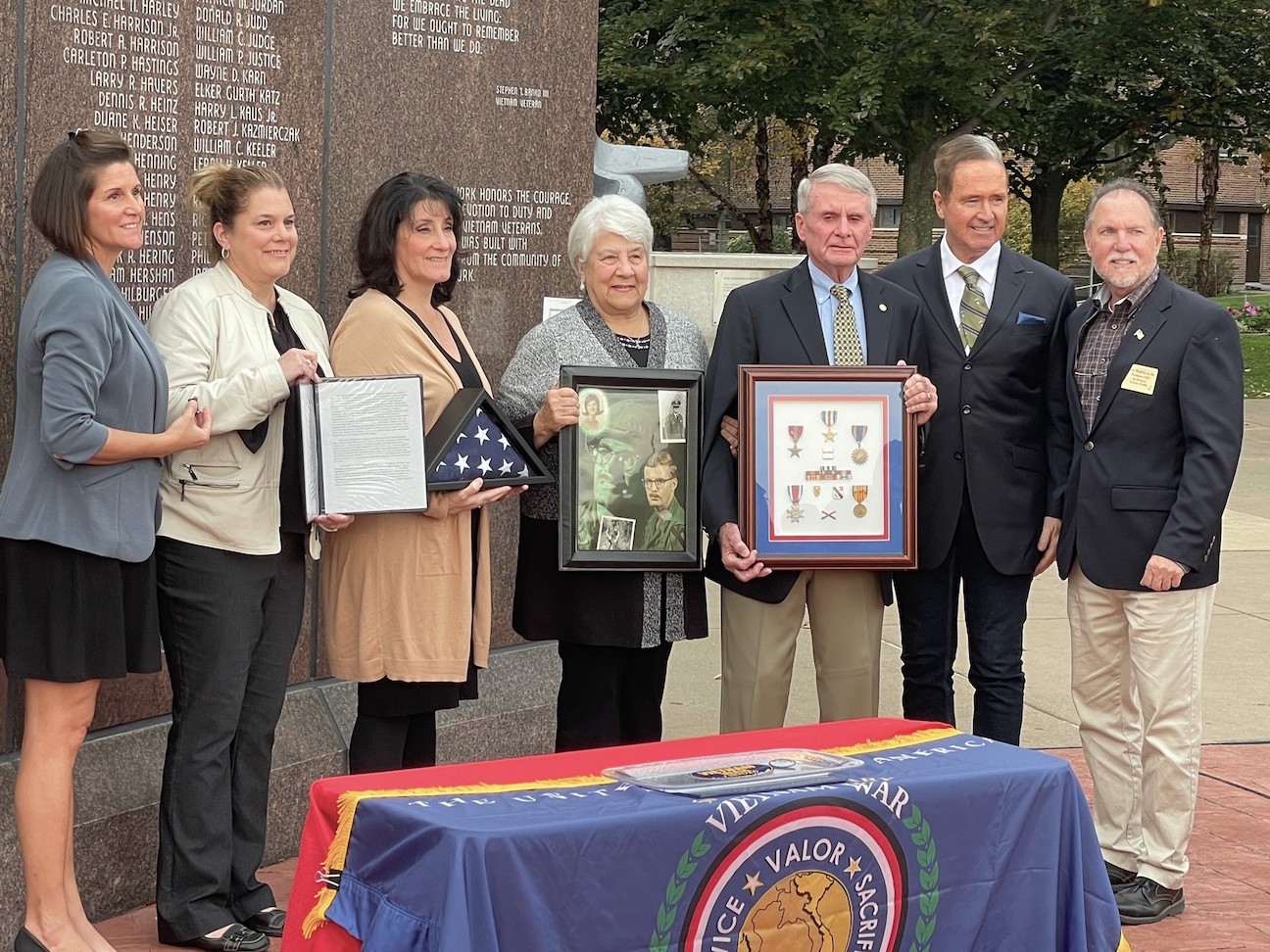 Congressman Brian Higgins recently honored Vietnam veteran Capt. Jack Walter in a ceremony at the Buffalo and Erie County Naval & Military Park for his distinguished service in U.S. Army. He presented Walter with a Vietnam veteran lapel pin ahead of Veterans Day.

“Capt. Jack Walter dedicated his life to both his country and his community,” Higgins said. “During his military service, he was selflessly willing to sacrifice his life to protect his country and his fellow soldiers. For his community and family, we he was willing to sacrifice his time. Capt. Jack Walter was recognized by the military for his valor and heroism and at home he has been recognized for his community commitment. We are eternally grateful for his leadership and service.”

“Honoring local veterans is an essential part of the mission of the Buffalo and Erie County Naval & Military Park,” said Paul J. Marzello Sr., president and CEO. “We are grateful for this opportunity to recognize Vietnam veteran Capt. Jack Walter’s service to our country.”

Walter grew up on the East Side of Buffalo, the eighth of nine children. His father was a bricklayer, who instilled in him the values of hard work and dedication. A graduate of Canisius High School in 1964 and Gannon University in 1969, he commissioned as a 2nd lieutenant in the U.S. Army (field artillery). At Gannon, Walter was a member of the Army ROTC Advanced Corps, which gave him a solid foundation of leadership skills. He went on to serve with the 1st Cavalry Division, 1st/21st Artillery. He was an artillery forward observer with an infantry company, an artillery liaison officer for an infantry battalion, and an assistant executive officer for his firing battery. While in Vietnam, he served in part of the incursion into Cambodia in May and June of 1970 and was promoted to 1st lieutenant in Cambodia. 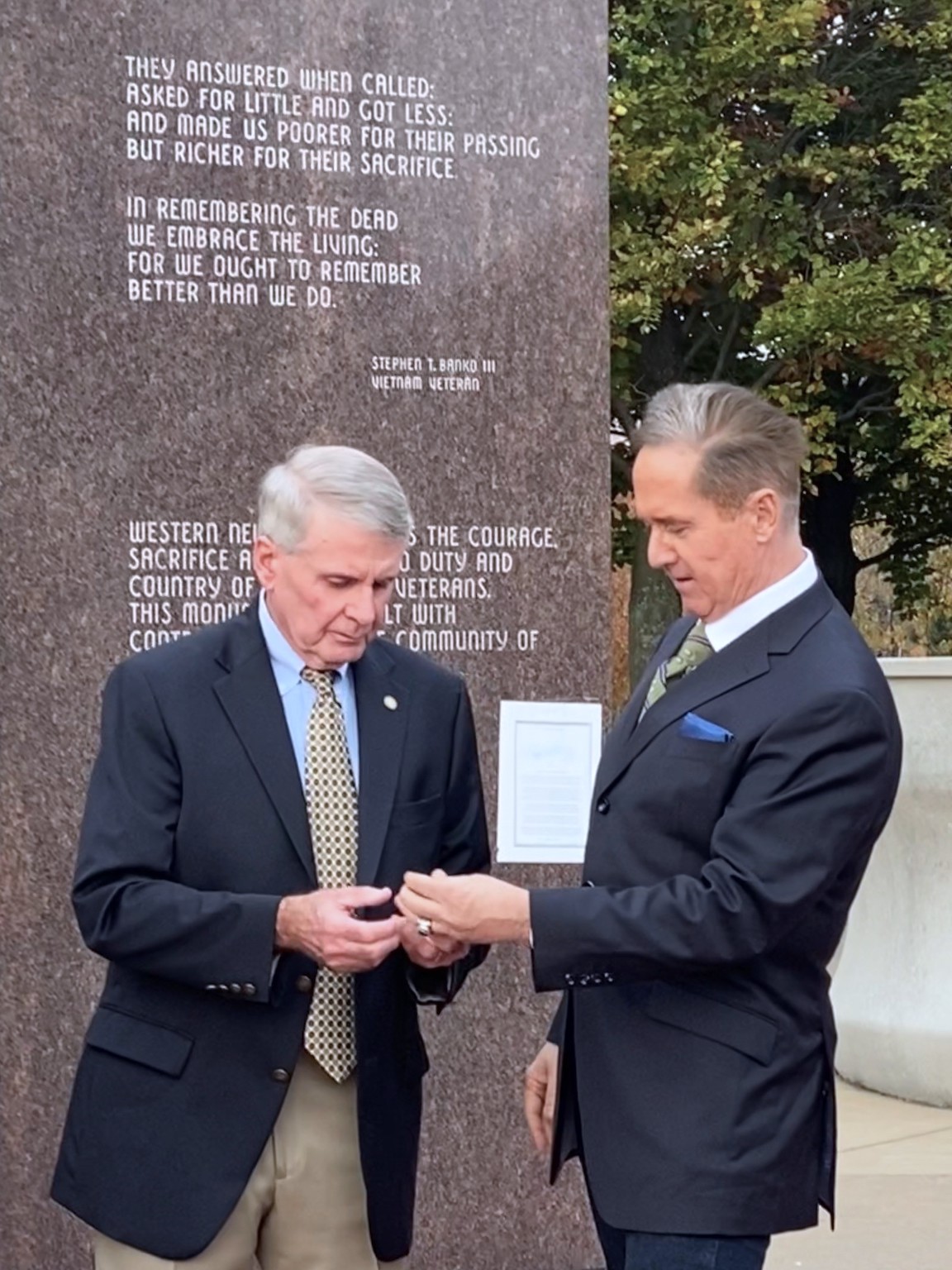 On June 22, 1970, in Cambodia, during an intense ground battle, Walter was serving an as an artillery liaison and repeatedly came upon heavy enemy fire as he diverted devasting aerial and field artillery on enemy positions. As a result, he was awarded the Silver Star, which is the third highest military decoration for valor in combat.

Walter was also awarded two Bronze Stars. He received his first Bronze Star with Valor for “for heroism in connection with ground operations against a hostile force in the Republic of Vietnam.” On Feb. 27, 1970, his platoon encountered automatic weapon fire from an enemy bunker. Walter immediately called in artillery and airstrikes. His second Bronze Star was earned for Meritorious Achievement in ground operations against enemy forces in Vietnam from October 1969 to 1970.

Additionally, Walter received five Air Medals, the Republic of Vietnam Campaign Medal with 1960 Device, and several other awards for his service in Vietnam. After returning home from war, he continued his military service in the U.S. Army Reserve where he was promoted to captain in 1973. In 1974, he retired from the military and joined the aerospace and defense industry for the next 36 years.

Higgins’ team said, “The leadership skills that Jack gained during his military career easily transitioned into civilian life. He was a dedicated family man and committed member of the Western New York community. An active participant in the Amherst Girls Softball League, he spent 11 years as a coach, vice president, treasurer and registrar. In 1991, he received the Hall of Fame award for his long-time involvement. Additionally, he coached the Christ of Kings Girls’ basketball team for eight years before joining the Nardin Academy varsity basketball team as an assistant coach for five years. Walter was also a dedicated member of the Christ the King church. He served on the parish council for 12 years, as president of the parish for two years, and chairman of the finance committee for five years.

He attributes much of his success to his supportive family, which includes his wife, Janice; their three daughters, Jacquelyn, Judith and Mary; and his 10 grandchildren.

Walter’s friend and fellow Vietnam veteran, Tom Bubar, was instrumental in securing this special recognition for Jack. Higgins’ team said, “Overall, his dedicated military service and commitment to community and family is an example of selflessness and sacrifice that makes the world and Western New York a better place.”