The annual Edmund Fitzgerald commemoration and music event on Nov. 4, hosted by artist and enthusiast Tom Asklar, went off very well at The Brickyard Brewing Company, where many came to support the historic Lewiston Council on the Arts and its mission. The presentation enlightened the audience to the ship's active history as an iron ore carrier upon the Great Lakes, its place in the world of commerce, and of the lives lived aboard.

“Thank you all for coming. Now, we shall ring the memorial bell in honor of the 29 men lost on Nov. 10, 1975, on Lake Superior aboard the Edmund Fitzgerald," said 'Commodore' Justin Higner of Wheatfield. "We also honor, with the 30th ring, mariners of the Merchant Marines of the United States, Canada and of the world. ‘In Peace and War,’ we owe them our enduring thanks. As we remember the men and hear the tolling of the bell, we should grieve, but we should also celebrate their lives as well. As the bell is in their hearts, so they are in the bell. And in the bell’s tone are the voices of the men and we shall listen."

The ringing of bagpipes was performed after the reading of 29 names with the tune "Amazing Grace" by Merchant Mariner Jim Rankine. Music was provided with great melody by Bruce Wojick, Jamie Holka, David Thurman and guest Jeremy Hoyle playing Gordon Lightfoot's classic “Wreck of the Edmund Fitzgerald" ballad among other classic songs. The BBC's own special beer Gitchgumee was on tap (and still is) as well as a great menu. The 14-foot-long illuminated art sculpture of the doomed ship, built four years ago by Higner, comes in four pieces to make it easier to travel.

The ship, blinded by the sheer force of wind and water, was lost mysteriously in hurricane-force winds and 35-foot waves by about 7:15 p.m. on Nov. 10 on Lake Superior. The Arthur M. Anderson (tracking and assisting the Fitzgerald) and the William Clay Ford cargo ships also caught up in the storm. 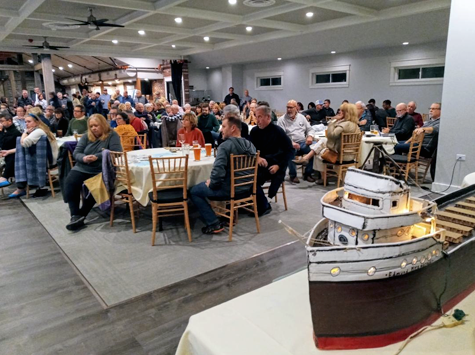