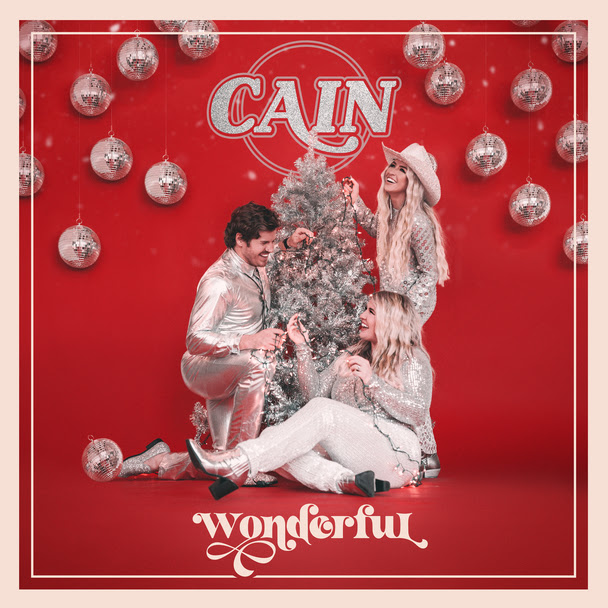 It's been a whirlwind year for CAIN. With breakout back-to-back No. 1 hits "Rise Up (Lazarus)" and "Yes He Can", both of which are featured on CAIN's first full-length album, “Rise Up” (Provident Label Group/Sony Music), the sibling trio is now ready to release its first holiday project. Debuting today, “Wonderful,” the six-song EP, features renditions of "(Christmas) Baby Please Come Home," "Grown-Up Christmas List," "Celebrate Me Home," and the band’s own arrangement of "O Come All Ye Faithful." Also included is "Christmas Is Coming" featuring Mac Powell, who co-wrote the song with CAIN; and the title track, with Steven Curtis Chapman, who also penned the song with the trio.

“Before 'Rise Up' or 'Yes He Can' ever came to mind, we had this Christmas project on our hearts," the members of CAIN share collectively. "Our entire childhood was marked by Christmas traditions and family get-togethers that lasted the entire month of December. Our parents taught us three things: love Jesus, love each other, and love Christmas. It was more than a holiday to us. Somewhere in the cookie-making, picking out gifts at the dollar store, dressing up as shepherds, and singing the '12 Days of Christmas' into the landline answering machine, a deep belief took root. Christmas is wonderful and that’s what we want to convey with this project: the joy, the nostalgia, the wishing that time could stand still. And especially for those of you experiencing loss and grief this year, Christmas can still be wonderful. We pray that the presence of God will fill the gaps where family once stood.”

Just announced yesterday, CAIN – Madison Cain Johnson, Taylor Cain Matz and Logan Cain – was nominated for their first American Music Award. They were also nominated as Best New Artist at the 52nd Annual GMA Dove Awards and won their first K-LOVE Fan Award earlier this year for "Breakout Single of the Year" with their debut No. 1 "Rise Up (Lazarus)."

The trio is currently on the road this fall with labelmate Zach Williams on his “Rescue Story Tour.” In December, they will join the K-LOVE Christmas Tour along with Casting Crowns, Mac Powell, Dante Bowe and Jordan St. Cyr, where they will be able to share many of their holiday songs and surely get everyone in the holiday spirit.

The trio will kick off 2022 by appearing on TobyMac's “Hits Deep Tour,” joining other artists such as Crowder, Cochren & Co. and Terrian. For all of the latest tour dates, visit here.

Since Christmas has been ingrained in the members of CAIN their whole lives, they want to help fans celebrate Christmas early with a special Fender Giveaway. Click here for a chance to win a Fender guitar signed by CAIN and Williams, an amp, gift cards, and so much more.

The music of CAIN quickly became a mainstay at radio with their debut single, "Rise Up (Lazarus)," which was released in early 2020.

Raised in Hartselle, Alabama, as pastor's kids and now residing in Nashville, CAIN got their first break opening for Dave Barnes and Andrew Ripp at a show in 2012. A decade later, they've performed at numerous sold-out dates on Williams' “Rescue Story Tour.”

A press release stated, “It has been said that you if spend five minutes with the members of CAIN you’ll feel like you’ve spent the afternoon in the sunshine. Their joy spills over onto each person they meet, their bright smiles as contagious as their stunning harmonies. Pouring their joy into their debut album ‘Rise Up,’ CAIN has discovered what it’s like to live their calling while doing their favorite thing – singing about Jesus.”