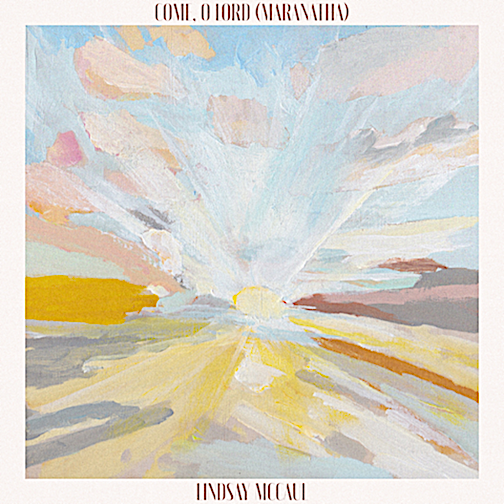 On Friday, singer, songwriter and worship leader Lindsay McCaul released her newest single, "Come, O Lord (Maranatha)," which is available now at all digital outlets. With a career of recording multiple CCM projects, this is her first single in seven years and her first corporate worship release.

"Come, O Lord (Maranatha)" was written by McCaul, along with Emily Weeks, Caleb Weeks, as well as Bryan Fowler who also produced and mixed the song.

A press release noted, “They penned it as both an encouragement to the church and a plea for Jesus' return, in the same way the Aramaic word “Maranatha” (מרנאתא) was used in two ways by the early church: to encourage one another (translated “the Lord is coming!”) and as a prayer (also translated “Come, O our Lord!”). The song also sings of God’s faithfulness to keep his promises by coming in human form once already, his present faithfulness as we sojourn on earth, and of the future hope we anxiously anticipate – his triumphant return.”

McCaul shared, “My hope is that this song would become a heart cry of the church as we long for the day Jesus returns and makes all things right. It's also a reminder as it's sung to live our lives in light of that coming reality, in keeping with 1 Thessalonians 4:16-18, which says, 'For the Lord himself will descend from heaven with a cry of command, with the voice of an archangel, and with the sound of the trumpet of God. And the dead in Christ will rise first. Then we who are alive, who are left, will be caught up together with them in the clouds to meet the Lord in the air, and so we will always be with the Lord. Therefore encourage one another with these words.’ ”