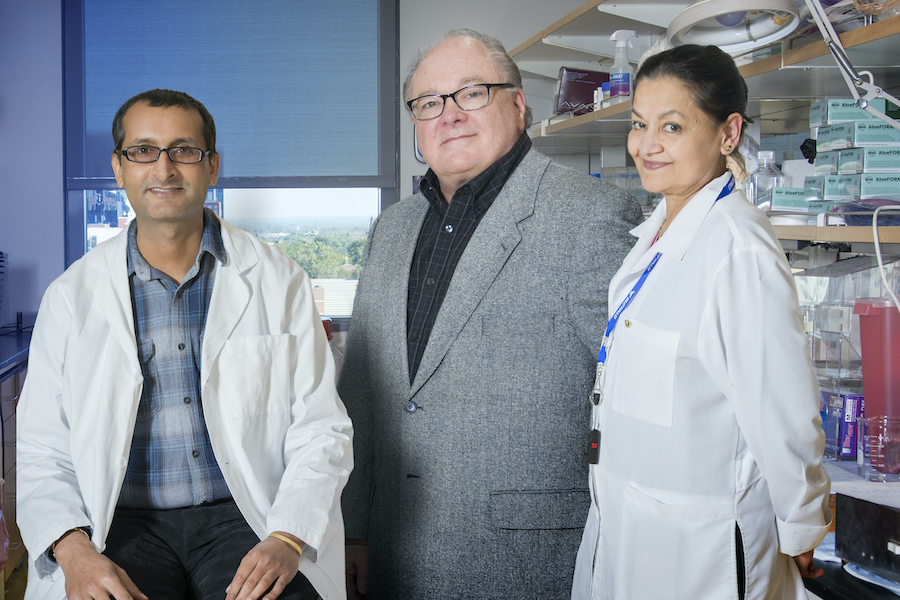 From left: Uddhav Timilsina, Thomas Melendy and Rama Dey-Rao, all of the department of microbiology and immunology, are the key developers of the new screening method. (Photo: Sandra Kicman/UB)

Nineteen months into the pandemic, the need for antiviral drugs targeted against COVID-19 is clear, given the global persistence of the virus, its ability to rapidly mutate into new variants, and the possibility that it could potentially develop strains resistant to existing drugs or vaccines.

But developing antivirals can take many years; the examples of hepatitis C, HIV and human papilloma virus (HPV) all illustrate the myriad difficulties involved with such efforts. The combination of antivirals that eventually proved effective in curing hepatitis C virus, for example, were under development for decades.

A promising development to address this challenge is a new, high-throughput screening method designed to quickly screen antiviral candidates against the SARS-CoV2 virus. It was developed by a team of University at Buffalo scientists led by Rama Dey-Rao, Ph.D., first author and research assistant professor; and Thomas Melendy, Ph.D., senior author and professor, both in the department of microbiology and immunology in the Jacobs School of Medicine and Biomedical Sciences at UB.

Described in a paper published earlier this month in Antiviral Research, the screening method is designed to identify a certain class of antiviral drugs that inhibit the main protease (MPro), a specific SARS-CoV2 target.

√ It expresses fully mature, functional SARS-CoV-2 main protease, whereas most other efforts have expressed slightly altered forms, which are not optimal for drug screening.

√ It can evaluate main protease function in living human cells.

√ The system is designed so that inhibition of the main protease produces a positive signal in a living cell. Systems that produce a negative signal require further screening to identify false-positives caused by cell toxicity.

“Our contribution was to create this screening method so that many, even thousands, of compounds with activity against SARS-CoV2 can be screened rapidly in just hours or days versus weeks or months using other methods,” Melendy said.

He added that UB, like most research universities, has agreed to make resources like this for the pandemic easily available to others to utilize.

The new screening method identifies antivirals that inhibit an enzyme called the main protease, which is necessary in order for SARS-CoV2 to replicate. Once the virus gets into a cell, the main protease is critical to being able to produce the other viral enzymes required to function inside the infected cell in order to create more virus and viral spread.

The advantage of the UB screening method is that it eliminates several steps usually involved in screening for antiviral drugs.

Melendy explained that, in most cases, inhibitors of viral enzymes are developed by finding and designing molecules that first target the viral enzyme in a test tube. From there, additional testing must be done to determine its toxicity, its ability to get inside human cells and, once inside them, its effectiveness.

After that, he continued, the drug candidates need to be tested against viral infection of human cells, which requires a biosafety level-3 facility requiring high-level containment because of the dangers involved in working with live virus. Because testing against live virus is dangerous, it is very expensive and more time-consuming. As a result, it is not amenable to rapid screening of large collections of compounds.

Dey-Rao said, “Since there is no live virus involved in the high-throughput screening, the system does not require the expensive and risky BSL-3 bio-containment.”

Melendy added, “And since the entire process occurs inside the living cultured cells, it demonstrates that any inhibitors identified must be functional in living cells.”

Once an inhibitor is identified, the next steps would be to test it against viral infection of human cells, in animal models, and then in clinical trials. Uddhav Timilsina, Ph.D., post-doctoral associate in Spyridon Stavrou’s group in the department of microbiology and immunology, verified this cell-based system works, and that the one drug tested that did inhibit the main protease in the UB assay showed similar inhibition of SARS-CoV2 infection of human lung cells.

The ability to screen thousands of compounds efficiently is key, because a single antiviral drug usually isn’t effective enough. As has been seen with HIV and HCV, the SARS-CoV2 virus will likely also require combinations or “cocktails” of antivirals.

“Antivirals are not ‘perfect,’, and viruses can mutate and become resistant to antivirals,” Melendy explained. “Therefore, it is more effective to develop more than one drug against specific viral target proteins. It’s also highly advantageous to treat individuals with a ‘cocktail’ of more than one antiviral drug.”

Melendy noted the Merck SARS-CoV2 antiviral that has been submitted to the Food and Drug Administration is an inhibitor of the SARS-CoV2 genome replicase.

“Combining it with an inhibitor of the SARS-CoV-2 main protease would likely provide a more effective therapy,” Melendy said.

He added that, with most public health experts expecting SARS-CoV2 to become endemic in the global population, continuing to circulate, causing disease and death, antiviral drugs, along with vaccines, will be a key part of dealing with this pandemic.

“Having more than one antiviral drug that works against more than one viral target will be critical in dealing with outbreaks, especially if a drug-resistant variant emerges, because such a virus would only be resistant to one class of antivirals,” he said.

Along with Dey-Rao and Melendy, co-authors are George R. Smith, who recently completed his M.S.; Uddhav Timilsina, Ph.D., postdoctoral associate; and Spyridon Stavrou, Ph.D., assistant professor, all of the department of microbiology and immunology. Additional co-authors are Zackary Falls, Ph.D., research assistant professor; and Ram Samudrala, Ph.D., professor in the department of biomedical informatics.

This work was funded in part by the National Institutes of Health, a SUNY Research Foundation COVID research seed grant award, the Jacobs School, the department of microbiology and immunology, and contributions by donors to the UB Foundation’s Papillomavirus Research Fund (which has been redirected to research on SARS-CoV2 during the ongoing pandemic).