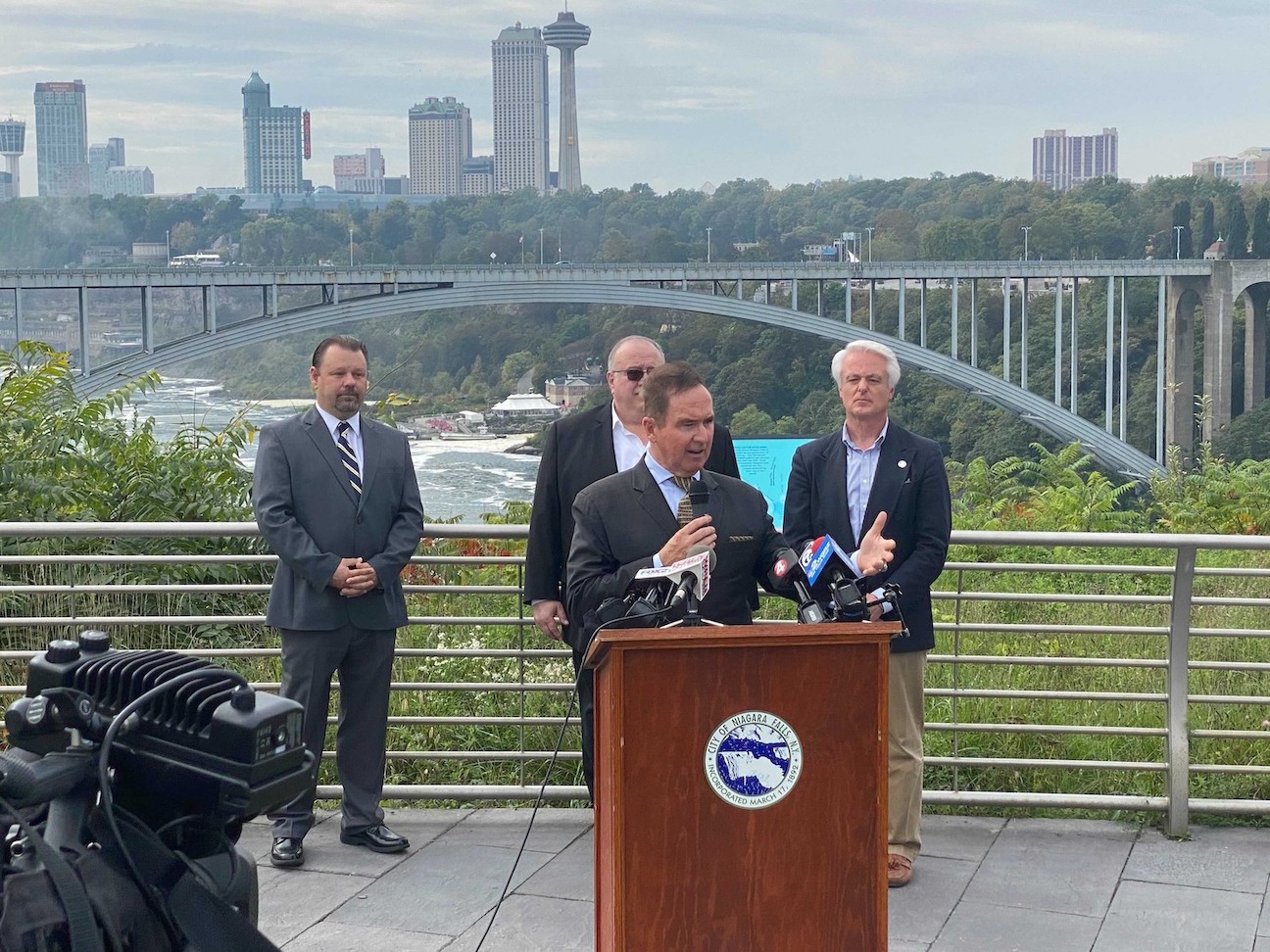 With existing shutdown extension deadline less than two weeks away, border community says another holiday season without Canadian neighbors would be devastating

Business and community leaders in Niagara Falls are calling on the U.S. government to reopen its land border to Canadians.

Congressman Brian Higgins and City of Niagara Falls Mayor Robert Restaino joined leaders and members of the Niagara USA Chamber to emphasize what they called the devastating impact extended border restrictions are having on the Cataract City and communities across the greater Western New York region, which typically see millions of people cross the Buffalo-Niagara land border annually.

The U.S. Travel Association reports the U.S. economy is losing $439 million a month as a result of the extended border shutdown. In the City of Niagara Falls, sales tax revenue collected from local hotels, shops and restaurants decreased by 26% in 2020 compared to 2019 levels. Despite the gradual return to normal business in 2021 and increased domestic travel by Americans, sales tax receipts in Niagara Falls remain down 10% this year. In addition, bed tax revenues in 2021, year to date, are down 11% when compared to 2019 numbers, while parking revenue collected from the downtown tourist district is down 23%.

“With high vaccination rates in both the United States and Canada, there is no reason why the United States is continuing to shut out our vaccinated Canadian friends,” Higgins said. “The shutdown has had devastating effects on our binational economies. Border policy right now is contributing to our economic problems. By reopening the border, we make it part of our economic solution.”

Restaino said, “The City of Niagara Falls has experienced a significant decrease in revenue within the past two years since the pandemic began and compounded by the border closure. The continued closure of the border to our Canadian neighbors only further contributes to the economic stress we’ve been experiencing here in Niagara Falls.”

Niagara USA Chamber Executive Director Kory Schuler said, "While we can measure the losses to the region from this prolonged border crossing closure, there are also many unmeasurables, such as the loss of potential business growth, loss of binational business relationships, and the loss of potential expansion of business within the region. We must end this illogical closure before our businesses suffer irreparable consequences.”

According to the U.S. Bureau of Transportation Statistics, before the pandemic, in 2019, more than 10.5 million people crossed into the U.S. in passenger vehicles through Buffalo/Niagara Falls border crossings. The border restrictions have resulted in close to 9 million fewer people – just 1.7 million individuals – crossing by passenger vehicle into the region in 2020. Unless restrictions are lifted, 2021 crossings will be drastically lower.

The border between the U.S. and Canada first closed to nonessential travel in March of 2020. Canada reopened its border to vaccinated Americans on Aug. 9, 2021. The U.S. government has continued to keep its land ports of entry closed to incoming Canadians. The existing order is set to expire on Oct. 21.

Higgins, who serves as co-chair of the northern border caucus and the Canada-U.S. interparliamentary group, continues to press for action to open the border. Last week, he spoke with White House Coronavirus Response Coordinator Jeff Zients. This week, the congressman discussed binational coordination with Canadian Member of Parliament Randy Hoback.

During a White House briefing on Oct. 4, Press Secretary Jen Psaki responded to questions about the administration’s travel guidance by saying, “I would point to the CDC. As you know, we're going to have an update on our international travel guidelines as we get closer to November. Early November remains the timeline that we're focused on, but I will leave it to our health experts to outline more specifics.”

On Sept. 20, the White House announced it plans to reopen the U.S. to vaccinated foreign air travelers from 33 countries in November. Guidance has yet to be released. Canadians have been permitted to fly into U.S. airports, but are unable to drive across the border, a policy Niagara Falls business and government leaders call illogical, unfair and devastating for border communities.