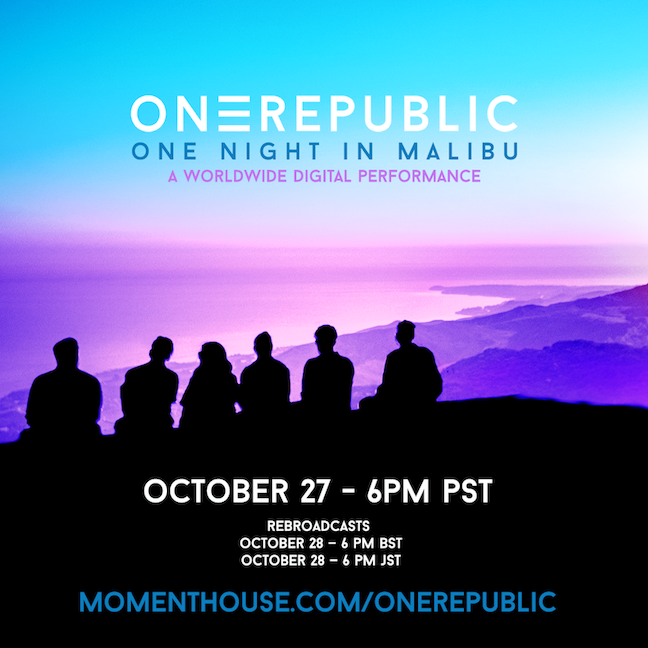 OneRepublic has announced a special digital performance presented by the premium social live media platform Moment House. Airing at 9 p.m. ET Wednesday, Oct. 27, with rebroadcasts Oct. 28 (depending on territory), the event will see the band perform a 17-song set featuring tracks from their brand-new album, “Human,” with two distinct setups and an added string section. The performance will take place in Malibu, California, bringing a cinematic, large-scale, live music experience to fans across the world.

Watch a teaser for the moment here.

OneRepublic’s show will be broadcast to various territories around the world, including North and South America, Asia, Australia and New Zealand, and the U.K., Europe and Africa. Fans will also have the ability to join an exclusive afterparty with the band immediately following the performance, making for a truly interactive experience. Exclusive event merchandise will also be available. Tickets are on-sale now here.

OneRepublic released “Oh My My,” their fourth full-length album, in 2016. The band has amassed 5 billion streams on Spotify. The latest album, “Human,” dropped on Aug. 27. It is two-times-Platinum as of release and includes features singles that, combined, have over 2.5 billion global streams: “Somebody,” “Run,” “Somebody To Love,” “Wanted,” “Didn’t I,” “Better Days” and “Rescue Me,” which has been certified RIAA Gold.