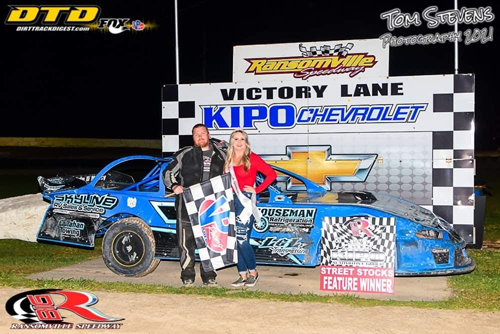 In total, $2,407 was raised for Suicide Awareness. Thank you to all the fans that donated during the pass the helmet during intermission.

Allan Wills and Chad Brachmann were on the front row for the PA 358 Outlaw Modifieds with Brachmann taking over lead, with Wills, Greg Martin, Jeremiah Shingledecker and James Sweeting racing in the top 5. Brachmann checked out on the field as by lap five, CB3 had a full straightaway lead over Wills, and the balance of the field. Greg Martin and James Sweeting battled for third and fourth after passing Shingledecker before the races’ halfway point. Sweeting would complete the pass on lap 18 exiting turn two to take over third place. The caution would come out with five laps remaining as Brachmann and Shannon Whaley made contact in turn three while negotiating lap traffic with five laps remaining. Brachmann had a seven second lead over the field. Brachmann would pull away from Sweeting to pick up the win.

The Mateo Hope Memorial for the Street Stocks would see Mike Childrose and Chip Wood bring the 24-car field to the green flag with 2021 Genesee track champion Bill Taylor taking over the lead, with Childrose, Dennis Cummings, Dan Schulz and Wood racing in the top 5. Schulz would take over third from Childrose. Jacob Vick spun in turn one to bring out the race’s first caution on lap three. On the restart, Taylor and Dan Schulz would take off with John Zimmerman, Josh Pangrazio and Brandon Sherwood racing inside the top 5. Chris Dziomba spun in turn three to bring out the caution on lap six, with Pete Pieczynski also was involved.

On the lap six restart, Pangrazio would pass Zimmerman to move into third place and then would go around Schulz to take over second place. Joey Zimmerman and Phil Schepis would tangle in turn one to bring out the third caution of the event on lap seven. The restart would see Taylor and Pangrazio on the front row with Pangrazio taking over the lead with Zimmerman, Schulz and Brandon Sherwood racing in the top 5. Schulz would go three-wide with Taylor and Zimmerman to take over second on lap 10, with Pangrazio showing the way. Taylor would regain the runner-up position on lap 11. Sherwood’s top 5 run would come to an end on lap 12 as he pulled into the infield. Zach Walsh would enter the top 5 on lap 13 after starting 15th on the grid. Pangrazio would lead Taylor, Schulz, Zimmerman and Walsh at the halfway point. Marcus Springer spun in turn two to slow the field down with nine laps remaining, erasing Pangrazio’s 1.7-second lead. Pangrazio and Taylor would pull away on the restart and would go on to collect the victory.

The first Investor’s Service Sportsman/Kevin’s Carpet Cleaning Novice Sportsman Shootout of the season was brought to the green flag by Brian Harris and Dave DiPietro, with DiPietro taking the lead. Derek Wagner, Cam Tuttle and Zach George raced in positions three through five on the track early in the 25-lap feature. Tuttle would pass Harris to take over second on lap three and would start to reel in DiPietro. As DiPietro, Tuttle and Wagner pulled away from the field, Scott Kerwin would enter the top 5 after passing George, and then the veteran would battle with Brian Harris for fourth place. Tuttle would close the gap on DiPietro as the leaders battled with lap traffic at the races’ midway point. Wagner would close the gap on the lead duo as the leaders hit heavy lap traffic with less than 10 laps remaining. Wagner would take over second as Tuttle had issues negotiating lap traffic. Colby Adamczak spun after going in the moat on the front straightway with four laps remaining.

The late-race restart would see Wagner challenge DiPietro, with Tuttle, George and Kerwin running right behind. DiPietro would pull away from Wagner to score the win, his second of the season.

Cole Susice and Nick Tarnowski brought the Sunflowers of Sanborn Mini Stocks to the green flag for their 15-lap feature event with Susice showing the way from his pole position. Ryan Plante would battle with Susice for the lead on lap two, with Tarnowski, Chris Miller and Jeffery Wynes racing inside the top 5. Plante would go to the outside and would take over the lead on lap six. Plante would pull away from Susice in the second half of the feature distance and would go on to score the win, his second of the season. Susice, Tarnowski, Miller and Wynes would complete the top 5.

The final racing event of the 2021 season will take place Friday, Sept. 17. 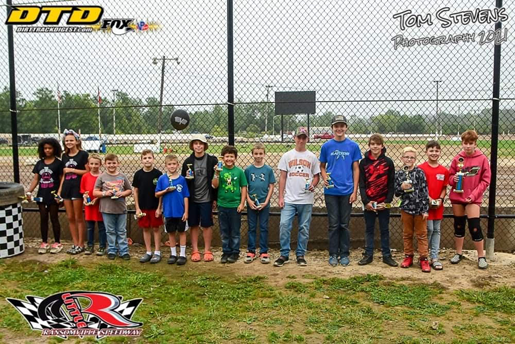 Ransomville Speedway celebrated the champions of the Little R on Sunday afternoon with the annual fun race and awards banquet catered by Chiavetta’s BBQ and Catering.

As competitors received their point fund money and trophies, speedway management, along with the Etue and Stolzenberg families, presented the Chris Etue/Larry Stolzenberg Dedication to Kart Racing Award. The accolade was presented to Mariann Coleman, who sold 50/50 tickets weekly. Thanks to her efforts, more than $12,000 was awarded to the drivers in the 2021 Little R drivers point fund.

For the complete point standings, visit www.RansomvilleSpeedway.com and click on the karts tab. Speedway management would like to thank all the sponsors that made racing possible at the Little R in 2021: SANY New York, Just Signs & Designs, Fisher’s Auto Repair, Slack Karts, SJE Shocks, Fitzgibbon Contracting and Construction, Finish Line Auto Detail, and Performance Manufacturing.

The Lucas Oil Empire Super Sprints (ESS) will make their triumphant return to the Ransomville Speedway on Friday, as Bailey Brothers Landscaping presents the King of the Hill to wrap up the 2021 season.

The last time the ESS competed at the “Big R,” 2021 Series champion Jason Barney was victorious back in 2009. Mike VanDusen won the inaugural visit in 1988 and repeated in 1989. John Birosh and Tom Tabor each won three ESS events, with Lance Younge and Craig Keel winning on two occasions each. Phil Mott, George Suprick III, Rob Dietrick and Steve Dow each have one Ransomville victory in ESS competition.

The KiPo Chevrolet Street Stocks will be racing alongside the Hobby Stocks/Pure Stocks from Land of Legends Raceway, Outlaw Speedway, Freedom Motorsports Park, and the Woodhull Raceway as the rules have been opened to allow those cars to compete at the “Big R.” The race will be 30 laps in distance and will be paying $500 to win, $300 for second place and $200 for third.

King of the Hill night will also feature the season championship event for the Sunflowers of Sanborn Mini Stocks along with the Investor’s Service Sportsman/Kevin’s Carpet Cleaning Novice Sportsman Shootout. The entire racing program will be streamed live on www.dirttrackdigest.tv with pit gates opening at 5 p.m., grandstands at 6 p.m., and racing underway at 7:15 p.m.

Bailey Brothers Landscaping will present the racing program. For more information about Bailey Brothers, log on to www.baileybrothersinc.com or call 716-998-7299.

Ransomville Speedway is located on Braley Road in the hamlet of Ransomville. “The Big R” is a 3/8th-mile DIRTcar-sanctioned facility that is the “Home of the Summer Nationals.” Ransomville also features a 1/16th-mile go-kart track for action on the “Little R” on Thursday nights. For more information, visit www.ransomvillespeedway.com; follow on Twitter @Ransomville or “Like” on Facebook; or call contact 716-791-3602 or 716-791-3611.