This year, on the 20th anniversary of 9/11, The Erie Niagara Sunrise Exchange Club will present a 9/11 Memorial Healing Field to honor and remember those who tragically lost their lives that day.

A press release noted, “To represent the magnitude of loss, we will assemble a solemn formation of 2,000 to 3,000 full-size flags on Sept. 10, 11 and 12, 2021. Posted in prefect rows and columns, the stars and stripes will fly in tribute to the victims of 9/11. The scene of red, white and blue flags, flying amid the blue sky, will present an inspiring and memorable panorama that will draw the Buffalo-Niagara Falls metropolitan community together. Visitors to this majestic display will come, once again, to Gratwick-Riverside Park in North Tonawanda.”

This year, the 9/11 Memorial Healing Field will recognize and honor the military, first responders and health care community.

Again, the press release stated, “Our health care community has been on the front lines here at home tending to the needs of the sick and dying – many of whom lost their lives in serving our nation. To remember that our nation is still facing threats both in our country and abroad, we need to pause and remember we are Americans. And a strong united America can be an example to all that a strong nation, ‘unified for service,’ can help all Americans.

The following is a brief outline of events:

The National Exchange Club has been called “America’s Service Club,” as the name “exchange” was selected because the group wanted to exchange ideas and information with like-minded individuals about how to better serve their communities. The motto is “unity for service,” and the four pillars are Americanism, community service, youth programs and the prevention of child abuse, which is the group’s national project. 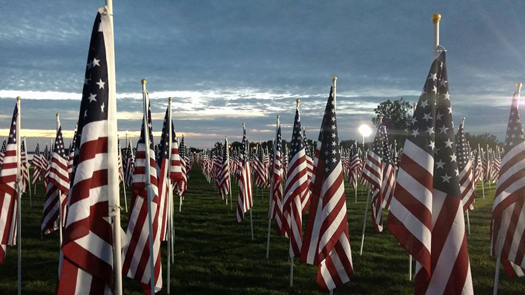 The 9/11 Memorial Healing Field will pay tribute to those lost on Sept. 11, 2001. (Image courtesy of The National Exchange Club)

Students in Niagara University’s introduction to criminal justice course assisted the university’s Border Community Service program to place hundreds of American flags on the front lawn of the campus to commemorate the lives of the victims lost during the attacks on Sept. 11, 2001. The project was done in preparation for the university’s 9/11 remembrance ceremony, which will be held at 9 a.m. Saturday.

Hosted by Niagara University’s Veteran Services Office, area first responders and those impacted by the tragic events of 9/11 will be honored during the ceremony, which takes place at the flag pole between Alumni Chapel and Glynn Hall (formerly St. Vincent’s Hall) on the NU campus. Keynote speaker Master Sgt. Tara Wichtowski will share her experience of being at Ground Zero shortly after the attacks.

The event is open to the public. 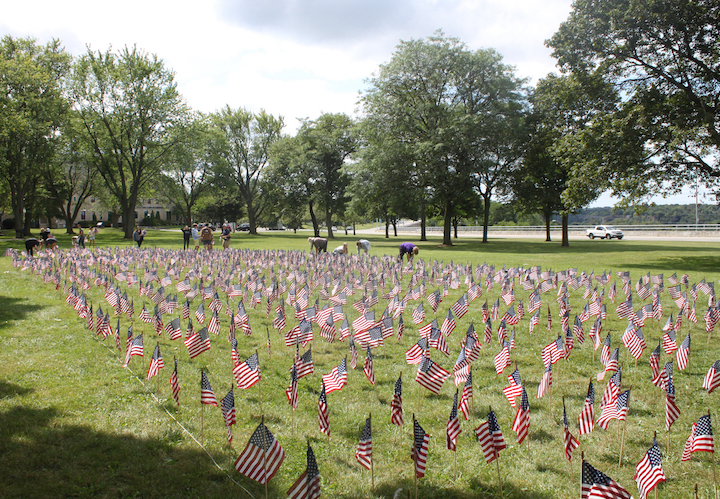 Criminal justice students plant American flags on the lawn of the Niagara University campus to commemorate the lives of the victims of the attacks on 9/11.

City of Niagara Falls: 20th anniversary remembrance of attacks on 9/11

This Saturday will mark the 20th anniversary of the attacks on the U.S. on Sept. 11, 2001. The City of Niagara Falls will honor and remember all those who lost their lives that day.

All available on and off-duty Niagara Falls Fire Department members and citizens in attendance will be asked to assemble at Fire House 8’s Memorial Park (located at Royal Avenue and Hyde Park Boulevard). Once assembled, in remembrance of those who were lost, attendants are asked to remain silent. A tribute will begin at 9:58 a.m.

In addition to the 9/11 tribute with the Niagara Falls Fire Department, the city’s public library is partaking in the “September 11, 2001: The Day That Changed The World” exhibit. This is an educational exhibition that presents the history of 9/11 and explores the consequences of terrorism. This poster exhibition was developed by the 9/11 Memorial and Museum and was made possible by the National Endowment for the Humanities’ “Democracy Demands Wisdom.” the poster exhibit has been installed at the Earl W. Brydges location and the LaSalle branch of the library for viewing. 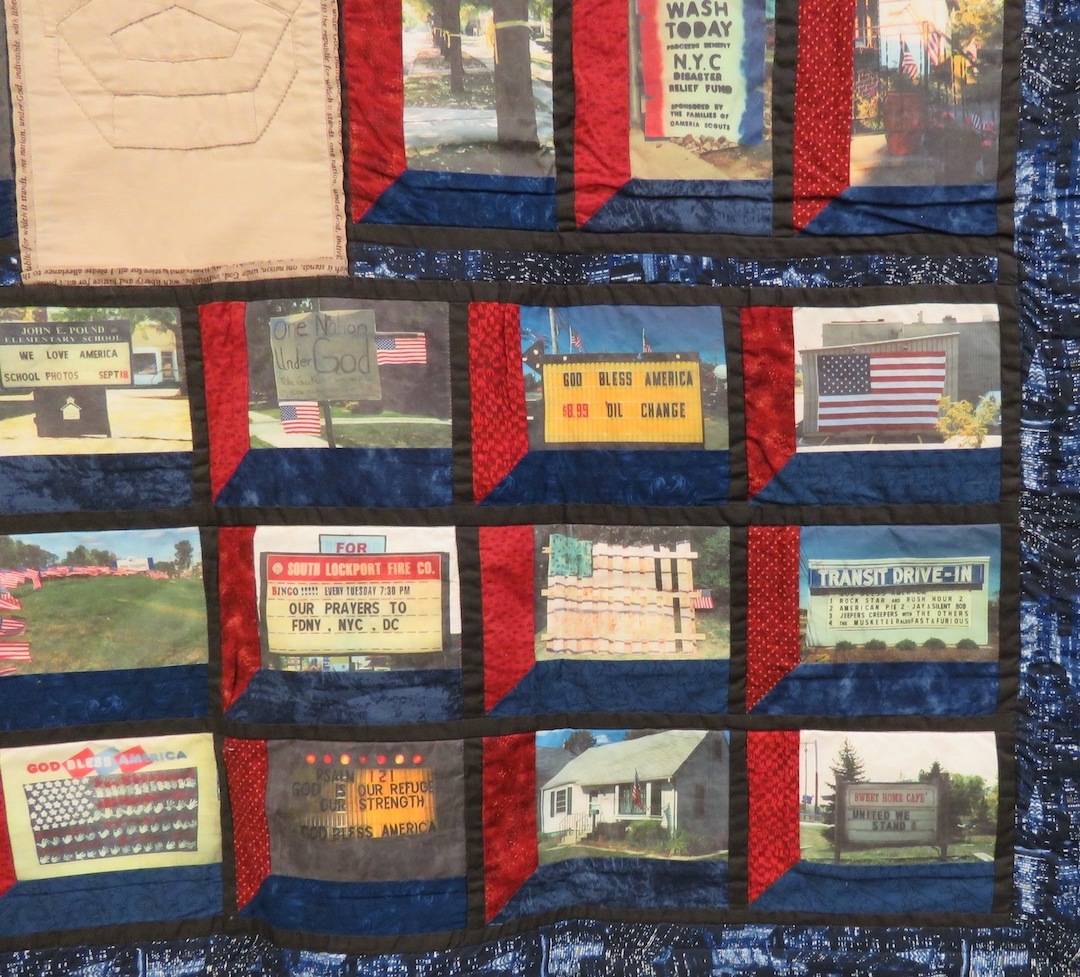 From New York, New York, where the World Trade Center once stood, to Shanksville, Philadelphia, where United Airlines Flight 93 went down, to Washington, D.C., where the attack on the Pentagon took place, in honor of the events that occurred on Sept. 11, 2001, the History Center is dedicating an exhibit to commemorate and document its continued impact and significance, located on the first floor of the Outwater Building.

A press release noted, “Through artifacts, imagery and storytelling, learn about the pivotal details surrounding these historic events; a special quilt detailed with patchwork recognizing how 9/11 affected those in Western New York will be on display and is currently on loan by Ms. Linda Hunter of Lockport. … This exhibit offers a closer look into the circumstances and aftermath of these attacks that we will never forget. It showcases the continued impact and significance, delving into the heroism, courage and resilience that lifted us up as a nation. Twenty years later, these lessons are more important than ever.

Gov. Kathy Hochul on Friday recognized the 3,723 recipients of the New York State World Trade Center Memorial Scholarship who have pursued their higher education goals over the past 20 years, in honor of their loved ones who died or suffered permanent injury as a result of the terrorist attacks on Sept. 11, 2001.

"The victims of 9/11 will never be forgotten, and a college education is one of the most meaningful ways to provide those who suffered the loss of loved ones with an enduring gift," Hochul said. "Our state cares deeply about the innocent lives lost during the tragedies of Sept. 11, 2001, and it is with great honor that we offer the WTC Memorial Scholarship as one means of preserving their legacy."

Created in 2001, the WTC Memorial Scholarship has awarded more than $176 million in financial aid to support the college costs of permanently disabled survivors as well as the spouses, children and financial dependents of 9/11 victims. Administered by the New York State Higher Education Services Corp., the scholarship covers the full cost of attendance at any State University of New York or City University of New York college or university or an equivalent amount for recipients who attend a private college in New York.

President of the New York State Higher Education Services Corp. Dr. Guillermo Linares said, "We will never forget those who lost their lives during the tragic events of the 9/11 terrorist attacks. Over the years, we have awarded hundreds of millions of dollars through the WTC Memorial Scholarship to honor the fallen or injured by helping to ensure a brighter future for their families. Many families tragically impacted by the events of Sept. 11 who may not have the financial means to afford college without the assistance of New York state can now pursue their higher educational dreams, without worry or the burden of debt."

SUNY Chancellor Jim Malatras said, "As Sept. 11 draws near and we reflect on the immense tragedy and loss suffered by so many, I am moved by the courage of the thousands of World Trade Center Memorial Scholarship awardees. On a day when it seemed that time stood still, families of survivors persevered over the last two decades to succeed in life while never forgetting those lost. SUNY is honored to be a part of this program and proud to provide opportunity and access for so many tenacious and resilient students pursuing their academic dreams."

CUNY Chancellor Félix V. Matos Rodríguez said, "As we commemorate the lives of those lost in the 9/11 attacks, we acknowledge the courage of spouses, children and other family members who have carried on their loved ones' legacies in the face of immeasurable difficulty and unspeakable grief. CUNY is grateful to New York state for recognizing the transformational power of higher education and honored to help the WTC Memorial Scholarship recipients pursue the successes their fallen family members would have wanted for them."

To learn more about the WTC Memorial Scholarship program, or to apply, click here. 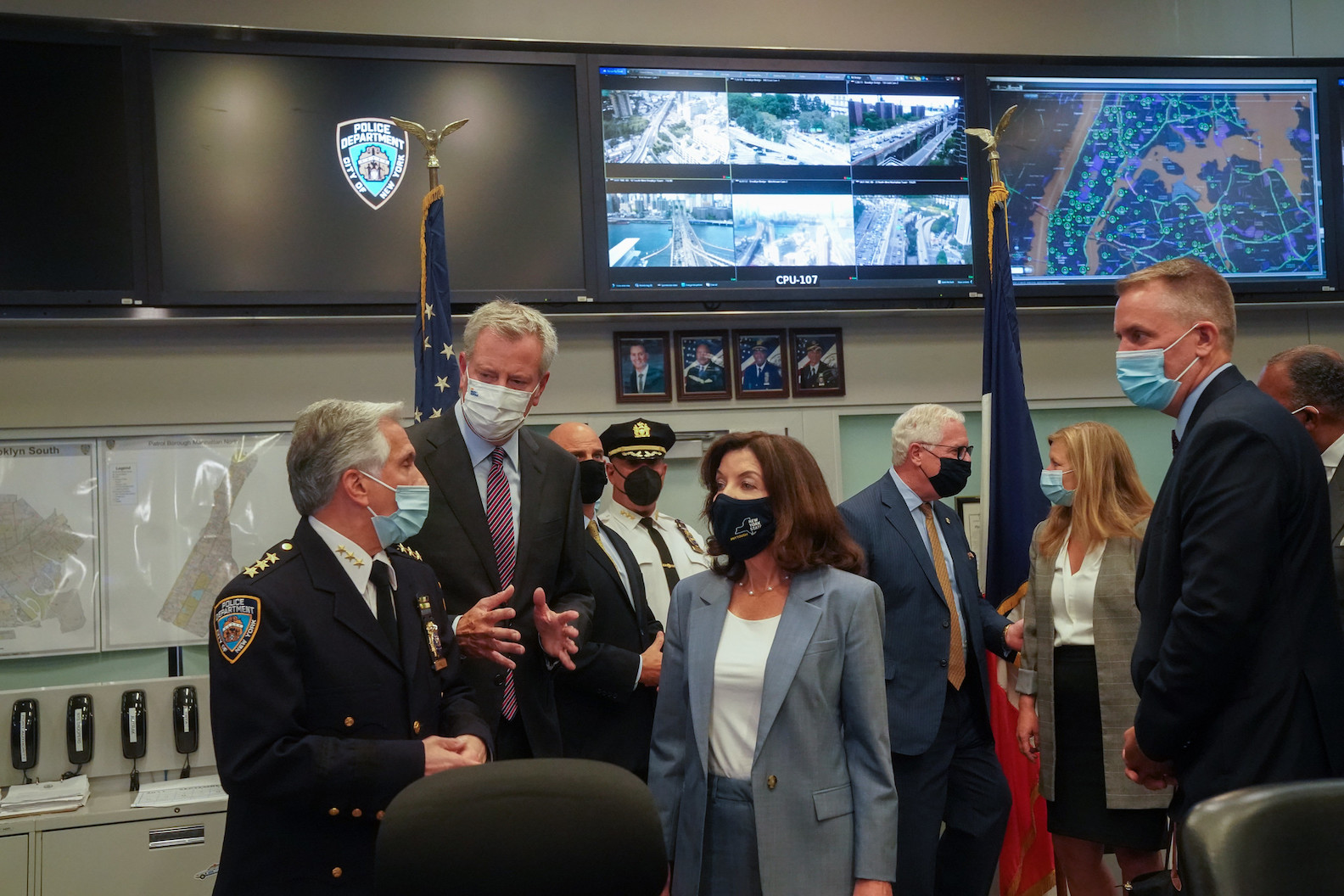 Hochul also announced 13 state landmarks will be lit blue and flags on state government buildings will be flown at half-staff on Saturday, Sept. 11.

"Twenty years ago, nearly three thousand people lost their lives in the horrific and unprecedented acts of terror against our state and our nation on Sept. 11, 2001," Hochul said. "We remember the victims and the brave first responders who lost their lives in the most unfathomable way, and we honor the survivors and victim's families who were tragically impacted by the attack. We will continue to stand together stronger and united as one New York state."

Landmarks to be lit include: