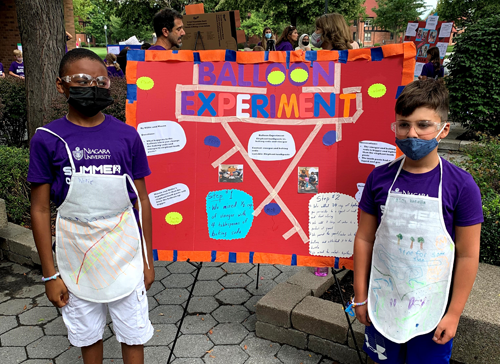 Niagara University’s summer science and STEM camps returned this year, engaging local students in grades kindergarten through eighth in a variety of activities that utilized the practical application of science, technology, engineering and math.

Students in grades 3-8 participated in the first of the two camps, held Aug. 16-19. They conducted several science experiments and presented the results of their research during the National Grid/NU STEM Camp Science Fair Showcase on Aug. 19.

Campers chose from four different experiments and developed their own questions and hypothesis to test during their scientific inquiry. They then created posters that detailed their work, the results of their research, and their conclusions, which they presented during the showcase.

Twins and repeat campers Whitney and Emma Seguin, third graders at Lewiston-Porter Elementary School, experimented with “elephant toothpaste,” a foamy concoction made of dry yeast, water, liquid dish soap and hydrogen peroxide. They used differing amounts of yeast to see what would happen, and discovered that, the more yeast they used, the more the substance bubbled up.

Willie Mills, a fifth-grade student at Harry F. Abate School, who also experimented with elephant toothpaste, said he “liked that we got to act like scientists” during the camp.

Other students explored what happens when they combined Mentos candies and carbonated soda, or how sunscreen affected the way UV beads absorbed sunlight.

The second of the two camps, held Aug. 23-26, enabled students in kindergarten through second grade to explore topics such as coding/robotics, science investigation, and engineering through fun activities that integrated children's literature. Campers built bridges that would help the Gingerbread Man escape the fox after reading that story, and tested hypotheses for various experiments inspired by the story of “Pete the Cat.” Focusing on the setting, characters and major events of a modified version of the “Three Little Pigs” story, the students learned how to code and move a robot and conducted experiments related to the motion of cars on ramps.

“We are so happy to be able to once again offer in-person STEM camps here at Niagara University,” said Ronni McGrath, camp director. “Several parents spoke to us about how much their children loved the experience and from this have declared that they want to be scientists or science teachers. That is truly the purpose of these camps – to help children develop an interest or possibly even a passion for science/STEM.”

The camps, sponsored by National Grid, also provided an opportunity for area classroom teachers to enhance their STEM knowledge and teacher candidates in NU’s College of Education to gain hours toward their state certification.