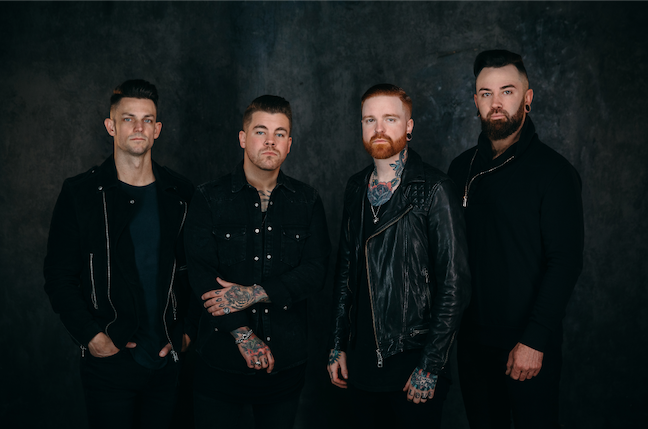 Matty Mullins (vocals), Kellen McGregor (guitar), Cory Elder (bass) and Jake Garland (drums) have spent the past few months dropping banger after banger and thrilling fans with each subsequent song and video. Memphis May Fire closes out the summer with the video for new single "Bleed Me Dry." The band’s team said, “It's a full-on riff fest, backed by unforgettable melodic firepower.” Watch the video here.

"Our third single of the year, 'Bleed Me Dry,' is my favorite yet," Mullins said. "It's an anthem for anyone feeling beaten down by the negative voices around them. We're so excited to announce that we will be donating 100% of the proceeds from the 'In Your Eyes' T in our online merch store to one of our favorite nonprofits — Heart Support! Every year, Heart Support helps men and women brave their wounds, find purpose, and discover healing. I am so stoked for everyone to hear this song and get involved with a great cause!"

"Bleed Me Dry" follows the one-two punch of the  tracks "Blood & Water" and "Death Inside," all of which have been released via longtime label Rise Records. The former is one of the fastest-growing hits of the Memphis May Fire's career, accompanied by a powerful video while cruising onto the SiriusXM Octane airwaves. Revolver called it a "return to form" and noted the song boasted an "absurdly melodic lead lick that cuts through the chugging breakdowns like a hot knife on butter." Meanwhile, the latter will remind fans of the band's sonic heft and is evidence of why Memphis May Fire have remained one of the scene's standouts.

Together, the two new tracks have accumulated over 10 million streams combined across platforms.

Memphis May Fire will hit the road this September, supporting Breaking Benjamin and Papa Roach for a run of East Coast shows.

Over the course of their career, Memphis May Fire have channeled a generation's worth of angst, frustration and pain, with a focused blend of gigantic melodic hooks and crushing aggression. Even after topping Billboard’s Hard Music Albums chart, having an album debut at No. 4 on the Billboard Top 200, and breaking into radio's Active Rock Top 20, Memphis May Fire refuse to sacrifice who they are or the people who made them.

Memphis May Fire have toured with a vast list of important rock and metal acts that include Killswitch Engage, Sleeping With Sirens, Black Veil Brides, Sevendust and Atreyu. They’ve co-headlined with Yellowcard and The Devil Wears Prada, regularly appeared on Warped Tour, and at major rock festivals. The band's previous six albums' continued relevance is a testament to the energized connectivity between the band and their audience. Songs such as "Miles Away," "No Ordinary Love," "Beneath the Skin," and "Carry On" account for 100 million views and millions of streams.