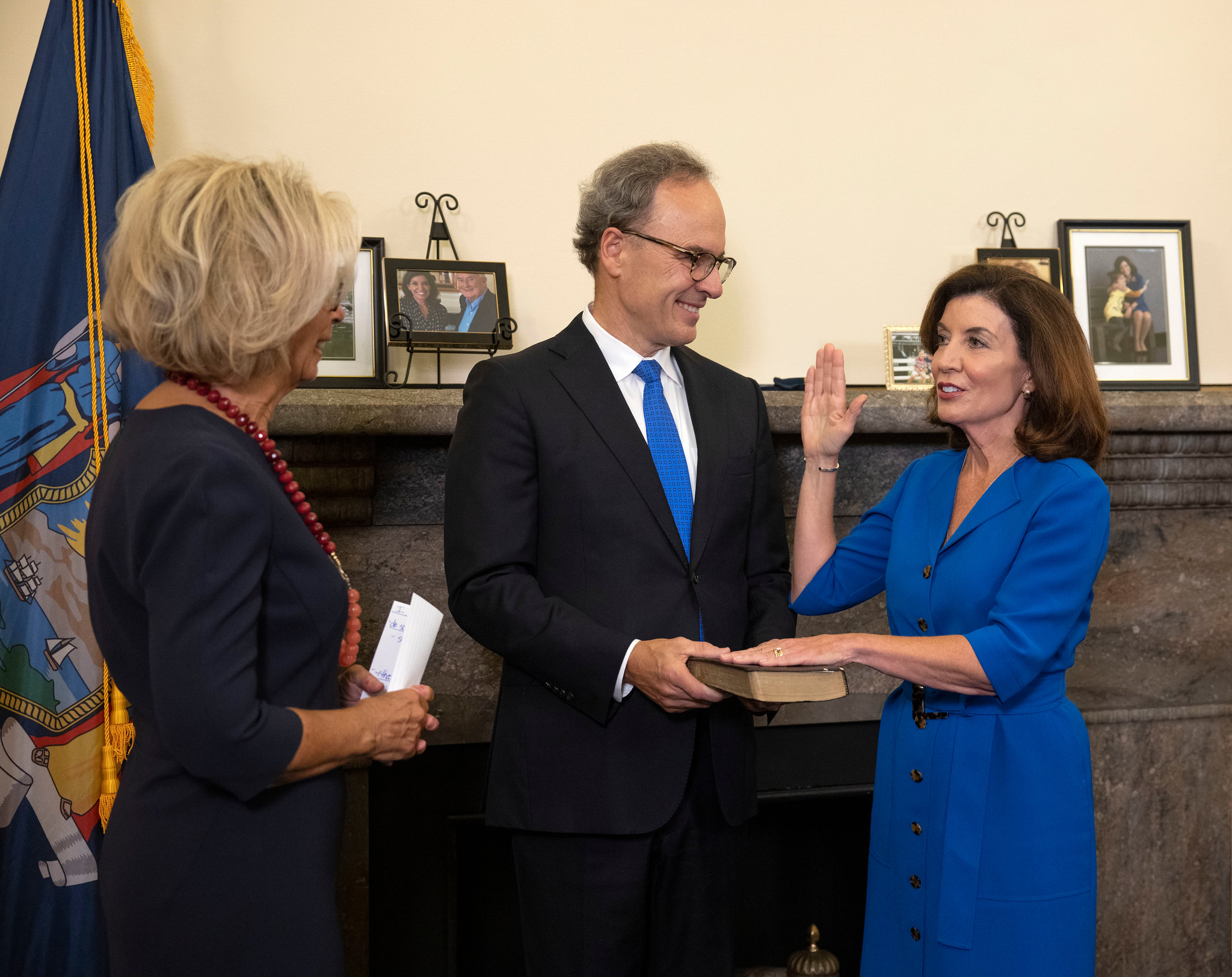 At a procedural ceremony at midnight Tuesday, Kathy Hochul was sworn in as the 57th governor of the state of New York.

A second ceremony took place at 10 a.m. Hochul was joined by immediate family members, Senate Majority Leader Andrea Stewart-Cousins and Assembly Speaker Carl Heastie. At that time, she said, in part, “This is an emotional moment for me, but it is one that I prepared for and I’m so looking forward to continuing the work we have to do. To that end, I spoke with President Biden last night to talk about a number of issues. He pledged his full support to my administration and anything we need. Particularly, I thanked him for the support we've received from FEMA and others in terms of cleaning up after Henri and how we were prepared, and I want to continue assessing the situation.

“But I do want to thank the people whose lives were disrupted as well as those who responded, not just to that crisis, but those who continue to fight on the front lines as we fight this deadly pandemic.

“I also want to thank the hundreds of thousands of state workers who I have such respect for, and I look forward to letting them know that I will represent them with my heart and soul as well. They are the face of government in many, many communities, and I have my utmost respect for all of them.”

Hochul said she’s “looking forward to a fresh, collaborative approach. That's how I've always conducted myself. It will be nothing new for me, but it's something I'm planning on introducing to the State Capitol.”

Heastie said, “Today, we have sworn in the first woman to serve as governor of New York. From State Senate majority leader to state attorney general to vice president of the United States, we continue to see women rise through the ranks of government, and it is a welcome trend.

“Gov. Kathy Hochul has served at every level of government and is a qualified and dedicated public servant. Over the course of her time in public service, she has visited every corner of this state and developed strong relationships with local representatives.

“My colleagues and I know that our state is facing many significant challenges, and we are prepared to partner with Gov. Hochul in addressing them. We look forward to working with her to ensure our children can safely return to school, New Yorkers are able to stay in their homes, small businesses can thrive again, our work to end to the scourge of gun violence continues and to fight the resurgence of COVID-19 to finally put this pandemic behind us. 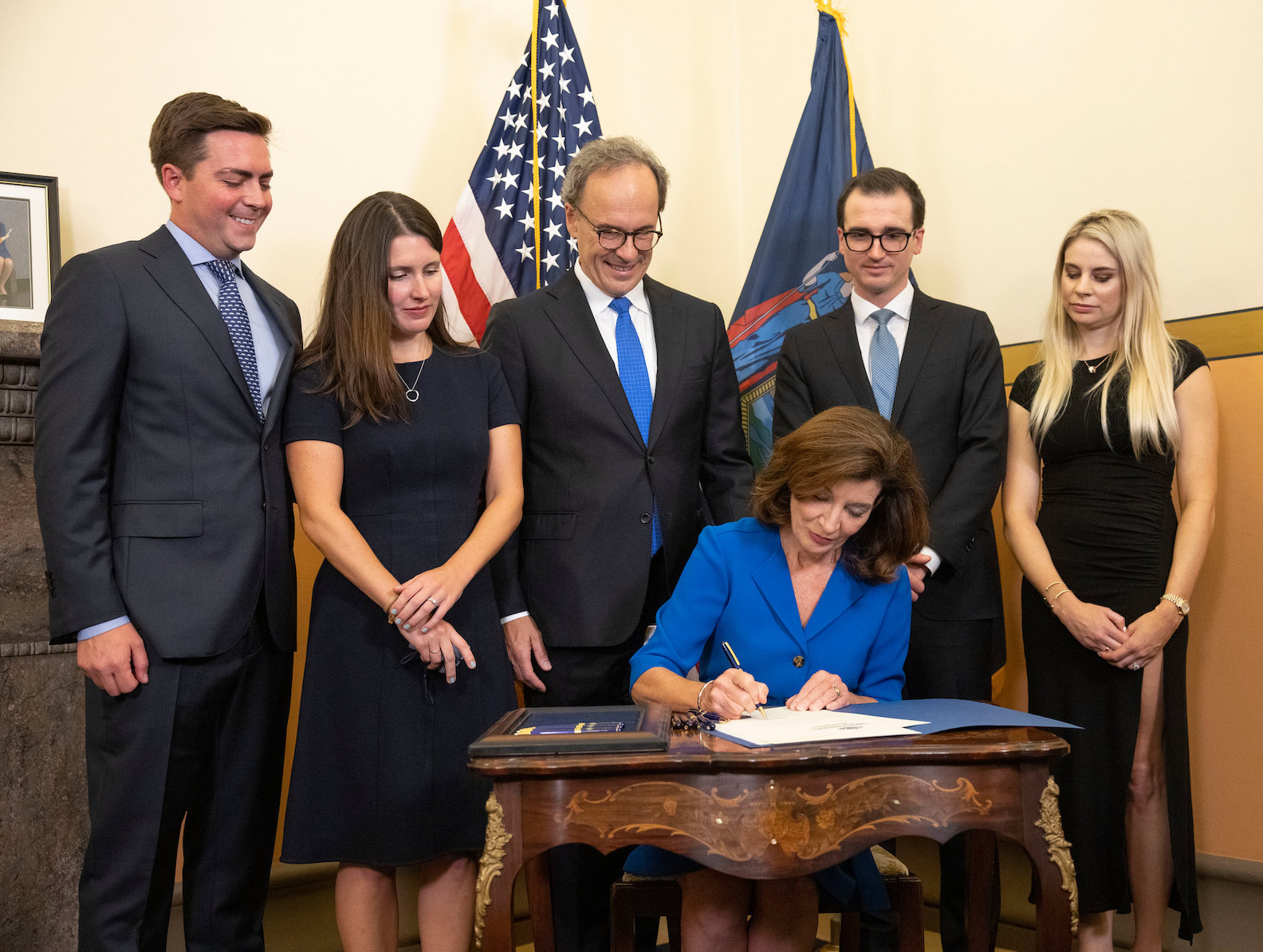 Senate Republican Leader Rob Ortt said, “Congratulations to our new governor and Western New York native Kathy Hochul on her inauguration as New York’s 57th governor, and the first female to hold the office in state history. I am looking forward to working with this new administration to try to improve the lives of New Yorkers all across the state.

“Gov. Hochul takes office in the face of many challenges. It is my hope that she will work with elected leaders in both parties to address pressing issues like the pandemic, rising crime, continued outmigration and other threats to the future of our state. Saving our state will require input from across the political spectrum, not just the most radical voices from one region of our state.”

New York Attorney General Letitia James said, “Today is a historic day for New Yorkers with the swearing in of our first female governor, Kathy Hochul. I congratulate Gov. Hochul on this incredible accomplishment and wish her well in her new role building on the progress of our great state. I look forward to continuing to work with her and the entire incoming administration.”

New York Power Authority Chairman John R. Koelmel and President and CEO Gil C. Quiniones said, “The New York Power Authority and the Canal Corporation congratulate Kathy Hochul on becoming New York state’s 57th and first female governor. Gov. Hochul, a friend of NYPA and canals, knows our values, mission and strategy, cares deeply about public power, and has provided tremendous support for our long-term electric grid, energy efficiency, economic development, electric vehicles, and ‘Reimagine the Canals’ initiatives. We look forward to serving in her administration as she brings people together and works to continue to transform this state in countless ways.”