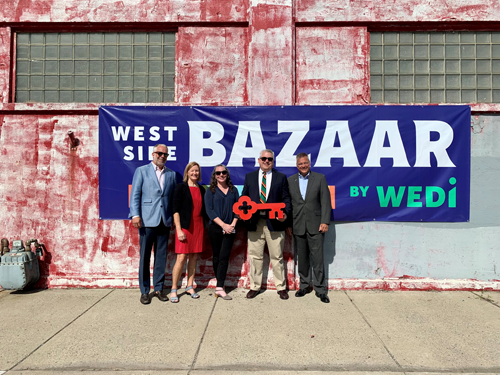 KeyBank, in partnership with the First Niagara Foundation, is donating $1.5 million to support the Westminster Economic Development Initiative’s new West Side Bazaar Project. This grant is part of KeyBank’s $40 billion national community benefits plan and is symbolic, a press release said, of the bank’s longstanding commitment to diversity, equity and inclusion.

WEDI’s current West Side Bazaar, located at 25 Grant St., Buffalo, is a popular stop for locals, business travelers and tourists.

KeyBank said, “Since its inception in 2011, it has become a crucial small business incubator where economically disadvantaged new business owners can find a safe, nurturing environment to develop their businesses with mentorship and programming for running an enterprise successfully. To accommodate the explosive growth the Bazaar has experienced and provide even more opportunities for entrepreneurs, WEDI is planning to move the Bazaar to a new location at 1432 Niagara St., in Buffalo. Scheduled to open in 2022, the new West Side Bazaar will quintuple in size and provide space for 24 restaurant, retail and professional services businesses, test and rental kitchens for independent chefs, classrooms, event space and seating for 75-plus patrons. It will also host nine full-time WEDI staff.”

“The West Side Bazaar is a jewel in Buffalo’s crown and is a catalyst for development, opportunity, hope and excitement on the West Side and across our whole city,” said Elizabeth Gurney, KeyBank director of corporate philanthropy and executive director of the First Niagara Foundation. “We are proud to support them as they make this move, which will enable them to provide even more opportunities to immigrants and refugees, and add more vibrancy and economic opportunities to the growing Niagara Street corridor.”

WEDI Executive Director Carolynn Welch said, “This generous gift from KeyBank in partnership with the First Niagara Foundation is a catalyst for our capital campaign to move and expand our West Side Bazaar. WEDI’s mission is to create equity through education and by supporting underserved entrepreneurs as they build toward their own establishments and realize financial security – the Bazaar is a first expression of their brick-and-mortar dreams. The new Bazaar will be an anchor and destination on Niagara Street demonstrating that all residents of Western New York can succeed and thrive in a culturally inclusive community.”

WEDI Board Chair Stephen Zenger said, “Our board is unanimous and enthusiastic in its vote to launch this capital campaign to build the new West Side Bazaar and affirmed by this significant gift from KeyBank in partnership with the First Niagara Foundation. Together, we are creating a space that tells a story of growth and optimism for our region.”

KeyBank said its grant will help WEDI and the entrepreneurs and clients at the West Side Bazaar in many ways, including:

•Provide a business anchor on the West Side, creating equitable paths to entrepreneurship and business ownership;

•Provide minority and women-owned enterprises (MWBEs) with life-changing capital in dollar ranges not offered by any other community development financial institution in Western New York;

•Enable emerging entrepreneurs from ethnic and racial minority communities to open small businesses and create jobs in their neighborhoods and communities;

•Create equitable and inclusive development, combatting gentrification/displacement – planting a stake in the ground for grassroots development in the community;

•Attract surrounding neighborhood residents and tourists to patronize businesses led by minorities, women, and low-income business owners, creating a ripple effect, and spreading the economic benefits in the community – advancing and creating self-sufficiency; and

•Provide MWBEs with transformative financial credit, eventually allowing them to borrow greater sums of capital from larger CDFIs and then banks.

KeyBank will also host financial literacy programs at the new West Side Bazaar, providing community members the opportunity to learn about budgeting, borrowing and financial wellness.

Since 2014, KeyBank, in partnership with the First Niagara Foundation, has given WEDI more than $250,000 to support the West Side Bazaar, after-school programs and events.