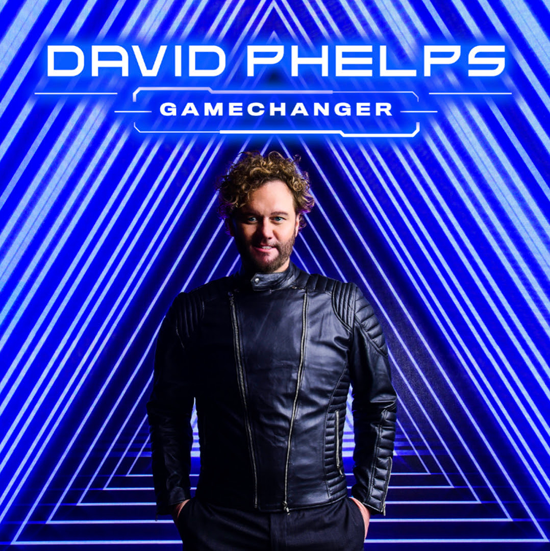 Known for his electrifying vocals – both as an award-winning solo artist and a former member of the world-renowned Gaither Vocal Band – singer/songwriter David Phelps returns Sept. 10 with “GameChanger.” A sonic kaleidoscope of 15 pop, jazz, Inspirational, R&B and even Broadway-inspired selections, Phelps’ StowTown Records debut carries deeply personal and profoundly resonant messages of redemption and unity.

“While some might think ‘GameChanger’ is a departure for me, it’s really just the next step in my development as an artist; this is who I am,” Phelps shared of the album, which he co-produced with his nephew, Grayson Proctor. “I started out in contemporary music before I joined the Gaither Vocal Band. I was blessed to be part of that amazing, iconic group and I loved those years very much, but I am and always have been a stylist, and that makes my music and career very eclectic.”

The album’s debut single, “Hello Beautiful,” is set for an exclusive Apple Music release Aug. 20, along with the official music video. A bittersweet tribute to lifelong commitment backed by a syncopated, horn-studded rhythm section, “Hello Beautiful” encapsulates one of the album’s central themes.

“I’ve always loved telling a redemptive human story,” Phelps says. “Nothing magnifies the splendor of humanity more than loving someone through all of life’s ups and downs. I can’t imagine many things more tragic than watching a loved one lose their memories of things once held dear – events, places, friends, children ... even you. Heroes sometimes sit patiently, enduring thankless days caring for someone they love and to whom they have committed themselves.”

Additional highlights of ‘GameChanger’ include the synth-pop album opener “I’m Gonna Love”; “Song For Sinners,” with a mellow jazz groove gently beckoning wayward hearts; “I Remember What We Thought Love Was,” a poignant piano ballad dedicated to Phelps’ wife; and “Eye To Eye,” a soulful duet with his son, Grant, exploring the complexities of their relationship.

“My son and I love each other dearly and our bond goes beyond words,” Phelps shares of the inspiration for “Eye To Eye.” “However, we haven’t always seen things the same way. I have been forced to concede that his choices are his – and they aren’t necessarily bad. Regardless, we have each other’s back. I would fight for him and he for me. We can agree to disagree and still love each other deeply. It’s been a lesson I’ve had to learn as an adult, but it’s vital. It’s OK if we don’t see everything eye to eye.”

“If I can positively influence or inspire someone to look at a relationship in their own life and hang on to it, view it differently, or nurse it better, then I’m going to take the chance to do that,” he adds of “GameChanger’s” thematic intent. “These songs are about the human experience, and I hope people can relate to that and be moved by them.”

A childhood musical prodigy from Tomball, Texas, Phelps is now a Platinum-selling vocalist with three No. 1 releases on Billboard’s music video chart, 14 solo albums and a PBS television special to his credit. A member of the Grammy and Dove Award-winning Gaither Vocal Band from 1997 to 2005 and again from 2009-17, Phelps has performed at numerous prestigious venues around the globe, including the White House, Carnegie Hall, and the Sydney Opera House.

A press release stated, “With a vocal range spanning more than three octaves, Phelps’ artistry crosses generational and stylistic barriers, making him one of the most beloved voices in American music today.”