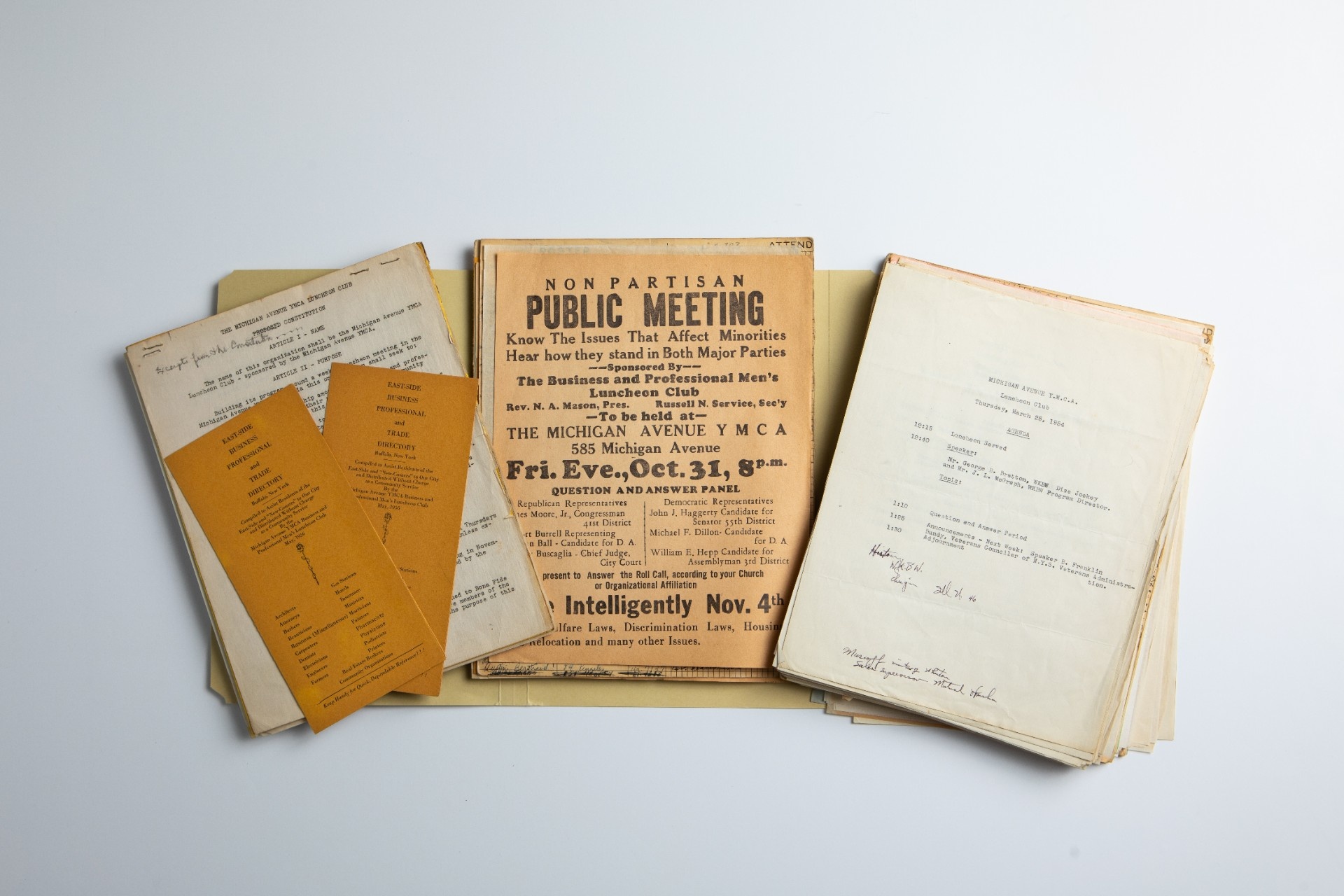 Old records from the Michigan Avenue Y.M.C.A. in Buffalo include items such as an East Side Business Professional and Trade Directory, a flyer for a public meeting with political candidates, and a luncheon club agenda. The items are part of a collection preserved by Lillian S. Williams, who partnered with the Y.M.C.A branch years ago to house its records at the University Archives, University at Buffalo, the State University of New York. Williams was first vice-president of the Afro-American Historical Association of the Niagara Frontier at the time she collected the items as part of the association's initiative to preserve records pertaining to Buffalo's African American community. (Credit: Douglas Levere / University at Buffalo)

Lillian S. Williams has devoted much of her career to building archives and organizations to advance the study of Black history, women’s history and local history

As a graduate student in the 1970s, Lillian S. Williams set forth to study Black history in Western New York.

“My friends and I wanted to do research projects on the African American community in Buffalo, and we were discouraged by our professors because they contended there were no sources to support that research,” says Williams, Ph.D., now an associate professor in the department of Africana and American Studies in the University at Buffalo College of Arts and Sciences.

“We knew that was the wrong answer,” she continues. “We knew there were sources, that there were primary records. The question was: Have they been collected by the repositories in the area? They had not. And what we did was to collect them. We were serious about wanting to do research on African Americans. So we showed our professors that the sources were there, and we each completed dissertations on the topics that we wanted to do.”

Those efforts helped to catalyze the formation and growth of the Afro-American Historical Association of the Niagara Frontier, which has since built a collection of over 600,000 pages of documents from local African American organizations, families and individuals.

Williams’ work on that project illustrates a central theme of her career: Building up resources that enable fellow historians to carry out research in the areas of Black history, women’s history and local history.

Beyond Western New York, she edited the microfilm edition of the papers of the National Association of Colored Women’s Clubs, was among the first members of the Association of Black Women Historians, and worked with fellow historians to document Black women’s achievements through biographies. At the invitation of Julieanna Richardson, Williams joined the scholars who comprised the planning board for “The HistoryMakers,” a national African American oral history project.

“Today, the resources are there – because we created them. Repositories recognize the importance of collecting the records of African Americans, whereas before they weren’t interested in those collections,” Williams says. “I remember years ago, when I was doing research, I was told to go to an oral history collection because they might have information on someone I was interested in. I spoke to the director, who said, ‘Why would we be interested in her?’ ”

In the 1970s, when Williams began searching for historical records pertaining to the lives of African American people and organizations in Western New York, she and fellow UB graduate students Monroe Fordham, Ph.D., and Ralph Watkins, Ph.D., found a wealth of material.

“We discovered there were major collections, in people’s garages, in their attics, and they saved them. So, it was almost as if they were waiting for us to come along and ask for those records,” Williams says, noting that the friends worked closely with members of the community at every stage of the effort. At first, “It wasn’t easy, because people wanted to make sure they could trust us, that we would preserve their records, because that was a part of their legacy.”

Over time, the team microfilmed an enormous number of documents: photographs, letters, scrapbooks, leaflets, event programs, newsletters and more, initially working in Fordham’s basement. Many of the records might not otherwise have survived.

On one occasion, at a meeting of activists addressing issues of poverty and racism, Williams mentioned she was interested in the history of the Michigan Avenue YMCA, but she couldn’t locate any papers. The organization’s executive director happened to be there, and said, “They’re in my office, and if you call my secretary at 9 a.m. the next morning, you can have them,” Williams recounts. Williams brought the documents back to UB, where long-time archivist Marchand “Shonnie” Finnegan added them to the University Archives.

Early on in this drive to preserve local Black history, Fordham approached Williams with the idea of starting an organization devoted to African American history in Western New York. The two joined with Shirley Harrington, Ph.D., a long-time educator; Frank Mesiah, a president of the Buffalo Branch NAACP; and Melvin Watkins, a librarian, activist and community leader, to found the Afro-American Historical Association of the Niagara Frontier in 1974, at a meeting in Williams’ Buffalo apartment.

“We published a newsletter. We published a journal. We did a radio broadcast program,” Williams says. “It was only a few years in that we sponsored a conference, and people came from Alaska, from Ireland, to Buffalo, to talk about local history, because at that particular time, local history wasn’t well respected in the academy. But we thought that, in order to understand what’s taking place nationally, you have to understand what’s taking place locally as well as across the country.”

Fordham, Harrington, Mesiah and Ralph Watkins have died. But their legacy survives through the association. The group hosts events, publishes the journal “Afro Americans in New York Life and History,” and has taped oral histories. Williams remains a board member.

The extensive records Williams, Fordham, Ralph Watkins and other members of the organization saved are available in microfilm at three locations in Buffalo: the William A. Miles Center for African and African-American Studies at the Frank E. Merriweather Jr. Branch Library on Jefferson Avenue; the E.H. Butler Library at SUNY Buffalo State; and the Monroe Fordham Regional History Center at SUNY Buffalo State.

Williams used many of the documents to write her 1999 book, “Strangers in the Land of Paradise: Creation of an African American Community in Buffalo, New York, 1900-1940.”

“If you looked at the literature of Black people in cities, there was this narrative that they came from the South to the North and settled in cities, and everything fell apart,” Williams says. “I knew there was a different story. This didn’t make sense to me. My parents moved from Mississippi to Niagara Falls during the ’40s, and we had community. I knew that we lived in community. We did not live in chaos. That’s the story I wanted to tell.”

Editing the Papers of National Association of Colored Women’s Clubs

Williams’ effort to obtain and preserve the papers of the National Association of Colored Women’s Clubs (NACWC) was a years-long quest.

The journey began when she started studying the life of Mary Talbert, an early 20th-century civil rights activist, suffragist and human rights reformer who lived in Buffalo. Talbert served as president of the NACWC from 1916-20.

Williams recalls that, as a Ph.D. student, “I ran across Mary Talbert everywhere. It didn’t matter where I was conducting research, whether I was looking at presidential papers, government departmental papers, or if I was looking at community institutions – there was Mary Talbert. Who is this woman, and why is she omnipresent? I knew she was president of the NACWC, and I thought if I got access to those papers, I would be able to get more information on Mary Talbert.”

So soon after completing her doctorate at UB, Williams contacted the NACWC.

That changed in the 1980s, when Williams was introduced to Virginia Poyer, an NACWC member, leader and donor. Poyer lived in Albany, where Williams took a job on the faculty of the University at Albany.

After Poyer contacted the NACWC on Williams’ behalf, representatives of the association and a publishing house visited Albany, Williams recalled. Over lunch, “They said yes,” Williams remembers. “I’d been trying to get access for 20 years, and they said yes.”

Williams negotiated with University Publications of America to publish the documents in a microfilm collection, with Williams selecting papers to be included. The project made speeches, correspondence, convention programs and minutes, handbooks and other records accessible to historians, and the NACWC received royalties, Williams says.

The effort aided Williams’ work on Talbert. But the significance extended far beyond that. The NACWC records have now been digitized, and are available through the ProQuest History Vault, making them more accessible to researchers.

“The NACWC was the most important vehicle through which African American women exercised political power,” Williams says. “And in a sense, it meant that to define the activities that African American women were involved in, including those that related to suffrage and other issues of concern, you needed to look at this organization. A failure on the part of the established academy was an inability to see the whole notion of intersectionality. These women were dealing with discrimination based on race and gender simultaneously.”

Historically, Black women’s voices were often marginalized in movements for racial equality and women’s rights, and it has been important to Williams throughout her career to create space for discussing intersectionality and Black women’s contributions.

“I was a charter member of the Association of Black Women Historians,” she says. “I’ll use the title of a famous anthology to describe the issues we encountered: ‘All the Women Are White, All the Blacks Are Men, But Some of Us Are Brave.’ We felt like the brave ones: We were falling out of women’s studies, out of Black studies at the time, and in 1979, we organized this group that could focus on the history of African American women.”

According to the organization’s website, the Association of Black Women Historians was born when historians Rosalyn Terborg-Penn, Eleanor Smith and Eleanor Parker set out to recruit Black women nationwide to launch the group.

Williams was among those who took part in early meetings discussing the effort, and she later served as eastern regional director. She also collaborated with fellow members on projects that preserved Black women’s history, including biographies.

Connections made through the Association of Black Women Historians remain important in the field today, says Williams, who remains an active member.

“The association is important as a source for mentorship, and it provides avenues for creativity, and a friendly environment where the research is respected,” she says. “I have half a dozen books that I just bought recently, and most of the authors are affiliates of the Association of Black Women Historians.”

Over the years, Williams says, “There’s been a shift in the scholarship in the field. Before, we were concerned about representation to a large extent, looking at the achievements of great Black women. It’s just grown tremendously over the decades, and these scholars are attacking all issues, nothing’s off the table.”

Seeing the field of Black women’s history grow so much has been exceptionally gratifying, Williams says: “It means everything.”