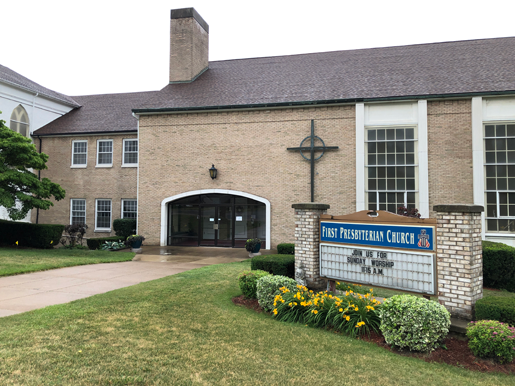 The First Presbyterian Church of Lewiston, 505 Cayuga St., will partner with village officials and the general public at 4 p.m. Saturday, July 17, to dedicate a sign announcing National Register of Historic Places designation for the Old Stone Church and adjacent village cemetery.

The Old Stone Church, opened in 1817, is Lewiston’s oldest and most historic church and played a significant role in assisting escaping slaves reach freedom in Canada on the Underground Railroad. The church and cemetery stand as iconic symbols of the village’s historic heritage.

The cemetery, known locally as the Marble Orchard, is the oldest public cemetery in Niagara County – and the resting place for Lewiston’s founding settlers and notable citizens. Many gravestones have birth dates going back to the 1700s.

The sign dedication ceremony will take place in front of the Old Stone Church and will be followed at 4:30 p.m. by a pulled pork dinner that can be eaten under a tent or ordered for takeout. The dinner will include a pulled pork sandwich, homemade potato salad, baked beans and dessert.

Preorder dinners are $15 and can be reserved by Tuesday, July 13. Call the church office at 716-754-4945 and leave name, phone number and number of dinners to reserve. Those who want a confirmation call that a reservation was received can make that request when placing an order.

Full-price dinners, at $17, will be available at the front main church entrance at Cayuga and South Fifth streets, and will be on a first-come basis until 6 p.m. or sold-out.

Proceeds from the dinner will go to preservation projects at the Old Stone Church, and 10% will be donated to a local charity. 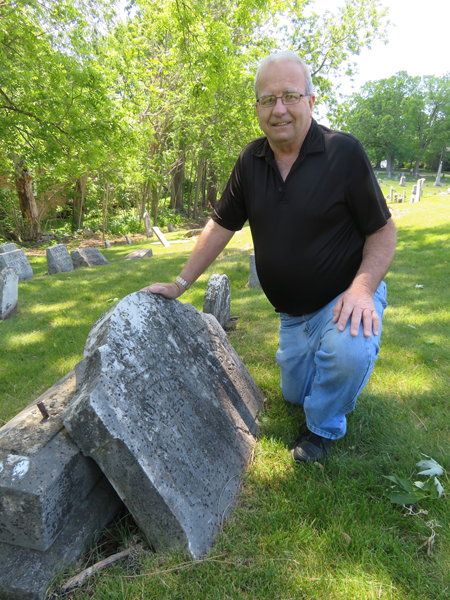 Village of Lewiston Historian Russ Piper (pictured) continued his column detailing work on the cemetery and in preparation of a big event next year.

“The Village of Lewiston will celebrate its bicentennial in 2022,” he said. “As current village historian and a seventh-generation descendent of the Piper family, I am working in phases in an attempt to clean up and restore the village cemetery. Currently, I have worked on clearing the brush and overgrowth along the stone wall of the original cemetery on the east side portion. In doing so, thus far I have discovered or uncovered over 30 grave markers that have been hidden beneath or partially buried into the ground.

“This is the start of what I hope to get accomplished before the celebration. In conversation with the DPW, I will be receiving some much-needed help to clear away the trees and remaining debris, allowing the original wall to be seen once more. We are also hoping to possibly upright some of the markers that have started to lean or have fallen over completely.

“Since there is no outside source of funding available to restore it the way I would like to see it done, with help from the DPW crew and myself, we will attempt the best job we can. Albeit, it will add to the improvements already under way.

“Since the cemetery is already 200 years old, it is important to be able to showcase its history and those prominent and ordinary souls who rest within its hallowed ground. The cast members of the Marble Orchard Players portray the famous and not-so-famous people who helped shape Lewiston's history, bringing their characters back to life, and share ‘secrets, scandals and scoundrels’ who are very much a part of Lewiston's history, while allowing the ‘skeletons’ to sleep in eternal peace undisturbed in their eternal resting place.

“As so many prominent and historical souls seek eternal rest and peace within its landscape, it is important to me in my role as village historian to oversee preserving the rich history of Lewiston for future generations to enjoy. With this in mind, I created the ‘The Lewiston Local History Museum’ in the Red Brick School with my lifetime collection of local history of our area for all to enjoy the artifacts within.

“It has been a lot of hard work thus far to reach this phase, but also a labor of love to honor and respect those who rest in eternal repose there.”