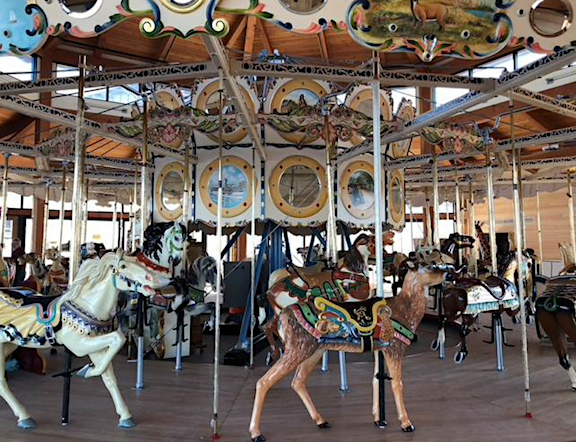 Erie Canal Harbor Development Corp. on Friday announced the completion of the Buffalo Heritage Carousel at Canalside, a $5.8 million project completed with a mix of state funding and private donations. Now open to the public, the historic carousel at KeyBank Roadhouse provides both family-oriented recreation on Buffalo’s waterfront and celebrates Western New York’s rich industrial heritage.

“Buffalo is ready to welcome back families and visitors of all ages to Canalside, and the solar-powered Buffalo Heritage Carousel is the new star attraction,” Lt. Gov. Kathy Hochul said. “I am proud to finally welcome home the De Angelis Carousel with its stunning craftsmanship that will provide countless memories and fun for all. Canalside has become a must-see destination and the carousel adds another unique attraction to bring in visitors and provide a boost for local businesses.”

ECHDC Chairman Robert Gioia said, “Just when you think Canalside can’t get any better, we add a spectacular carousel that will dazzle children and adults alike. The carousel fits in perfectly for a day of family fun that includes hiking, biking, boating, plenty of food options and the Explore & More Children’s Museum. It’s time to put the pandemic behind us and make this a summer to remember.”

Open daily from 11 a.m. to 7 p.m., with tickets costing $1 per ride, the carousel is also collaborating with Explore & More Children’s Museum and provides yet another attraction for the city’s revitalized waterfront.

Located in the timber-framed KeyBank Roundhouse and with unique views of the waterfront, each of the carousel pieces were meticulously restored by the Buffalo Heritage Carousel artists. The unique #153 Wurlitzer Band organ – one of the most popular models ever manufactured by the company – plays music scrolls that are integrated with the carousel through computer technology.

The overall project cost $5.8 million and relied on $1.2 million from the ECHDC, which is administered by the Empire State Development. The New York Power Authority committed this funding to the region following the federal relicensing of the Niagara Power Project in 2007.

The project also received $465,000 through the Buffalo and Erie County Greenway Committee, which is funded by NYPA, and $1.2 million from KeyBank and the First Niagara Foundation. New York State Sen. Sean Ryan secured a grant of $600,000 for the carousel’s restoration, while New York State Sen. Chris Jacobs landed a $500,000 grant for the building.

Additionally, the Margaret L Wendt Foundation donated $250,000 to acquire the carousel in 2016 and awarded another $250,000 to match a $250,000 grant from the Ralph C. Wilson, Jr. Foundation. The Russell J. Salvatore Foundation and Wegmans are among the donors that adopted one of the menagerie animals or contributed to the project.

The attraction sits on a custom-made steel structure manufactured by Carousel and Carvings, out of Marion, Ohio. The steel components are welded and bolted in place to support a vintage menagerie, park-style carousel that was manufactured in 1924 by Spillman Engineering in North Tonawanda for Dominick De Angelis, the original operator, whose family put the attraction in storage during the 1950s.

Buffalo Heritage Carousel Board President Laurie A. Hauer-LaDuca said, "Today, we celebrate, the long-awaited moment for the grand opening of our fully restored, antique, extraordinary wood carousel. The Buffalo Heritage Carousel's journey from inception in 2014 to this exciting moment has spanned seven years and is the result of our hard work, dedication, perseverance and the tremendous support of our community both public and private as well as the thousands of volunteer hours graciously given on the many aspects of this project. We look forward to officially opening the carousel today to share this wonderful treasure with our community and furthermore express our sincere appreciation of our project's donors, supporters and tremendous efforts of our volunteers. Our project would not have been realized without all of you."

KeyBank Director of Corporate Philanthropy and Executive Director of the First Niagara Foundation Elizabeth Gurney said, “The opening of the Buffalo Heritage Carousel at KeyBank Roundhouse marks yet another milestone in the exciting transformation and evolution of our great city’s waterfront We are so delighted to support this unique attraction, which will bring enjoyment to people of all ages and further cement the Buffalo Waterfront as a first-class, all season destination for family fun and excitement.”

NYPA Chairman and Buffalo resident John R. Koelmel said, “NYPA's significant support toward the restoration of this historic carousel demonstrates the Power Authority's commitment to Western New York and the development of Canalside. This project is now another wonderful attraction for local families and tourists to the region alike.”

The state has committed more than $90 million to transform Buffalo’s Inner Harbor into what is now known as Canalside, a mixed-use urban entertainment destination that has received national and international attention as one of the key drivers of the resurgence of Western New York. Open to the public since May 2008, Canalside features several fully restored facets of the original Erie Canal, including the commercial slip, boardwalk, and the historic replica canals.

Ryan said, “The journey to bring the Buffalo Heritage Carousel to Canalside has been long, and it has been a labor of love for everyone involved. Years of planning and hard work have culminated with the restoration of the De Angelis Carousel and its placement at a new permanent home along Buffalo’s waterfront. The history of this attraction is truly remarkable. The carousel was built right here in Western New York, and now 100 years later, it has returned home to delight and entertain a new generation. I am honored to have played a part in this process and take pride in the fact that the people of the state of New York played an integral role in the restoration of the historic Buffalo Heritage Carousel. As the latest in a series of fun, affordable, family-friendly attractions, the carousel will strengthen Canalside’s role as a year-round tourism destination. I encourage everyone to visit this great attraction to make memories that will last for a lifetime.”

City of Buffalo Mayor Byron W. Brown said, “The year-round, family-friendly De Angelis Carousel is a fantastic addition to the Buffalo waterfront. It will build on the popularity of the Explore & More Children's Museum and many outdoor activities for visitors of all ages, including carousel enthusiasts from across the country and around the world. This is yet another major investment made possible by Gov. Andrew Cuomo and the Empire State Development Corp. to assist the City of Buffalo in making its waterfront a world-class destination.”

About Erie Canal Harbor Development Corp.: The ECHDC is governed by a nine-member board consisting of seven voting directors and two non-voting, ex-officio directors. For more information on ECHDC, visit here.