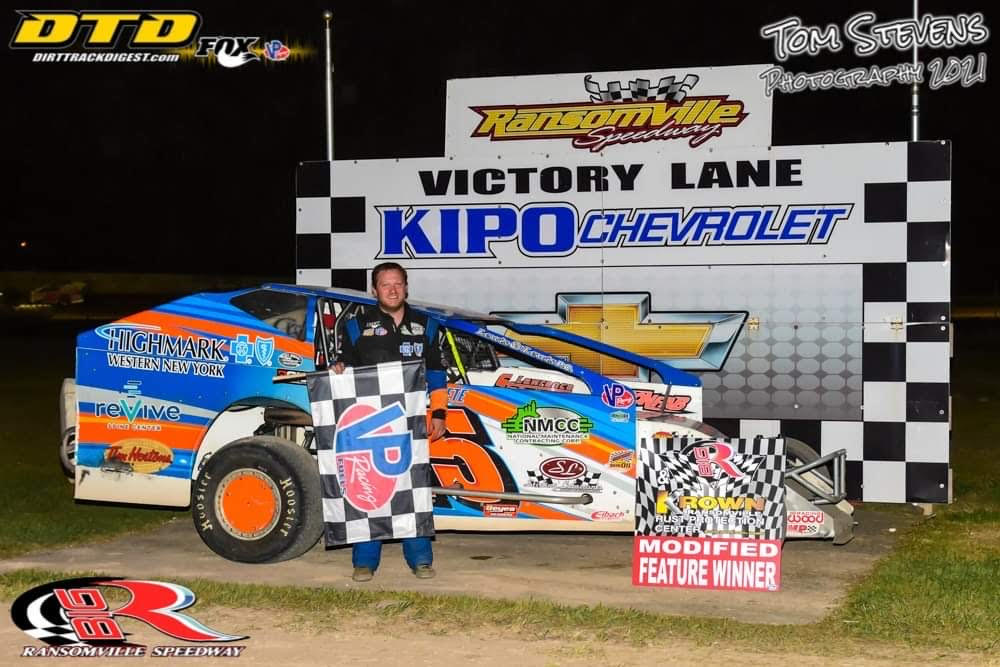 Erick Rudolph is perfect in 358 Modified competition in 2021 at Ransomville. (Photo by Tom Stevens)

“The Firestarter” Erick Rudolph is two-for-two on the season as the third-generation driver from Ransomville won the 30-lap feature for the Krown Undercoating Modifieds, as SANY New York presented the racing action at Ransomville Speedway Friday night.

“Showtime” Jaren Israel of Wilson picked up his first win of the season in the KiPo Motors Street Stocks.

Dante Mancuso from Batavia won his first Sunflowers of Sanborn Mini Stock feature of the season.

Sam Junkin of Alden picked up the win in the Kevin’s Carpet Cleaning Novice Sportsman.

Andrew Smith and Tuttle brought the Investor’s Service Sportsman to the green flag for their feature event and it was Tuttle taking the lead. Dave DiPietro would move into third place ahead of Zach George and Scott Kerwin. Kerwin went three-wide with DiPietro and George to move into third place on lap six, as Brett Martin looked to enter the top five as he battled with George and DiPietro. Off a lap eight restart, Tuttle would take off for the lead as Kerwin would go three-wide with George and Smith to take over second. Zach George would hit the turn two wall after he was pinched up the track to bring out the caution on lap nine. Brett Martin would pass Kerwin to take over second on the restart and would go after Tuttle for the lead. Kerwin would regain the runner-up position on lap 19, as Tuttle pulled away from the field. Noah Walker hit the turn four wall on lap 22 to bring out the caution. Walker was running in the top seven at the time of the caution. The three-lap shootout would see Tuttle in the lead as Derek Wagner battled with Brett Martin for third. Tuttle would pull away to get the win over Martin and Wagner as Kerwin broke on the final circuit.

Israel and Pat Dell set the pace in the KiPo Motors Street Stock feature and it was “Showtime” showing the way with Anthony Guthrie challenging Dell for second. With Guthrie taking over second, Pete Stefanski began his challenge of Dell for third place and would take over the position on lap three. Stefanski would then set his sights on Guthrie for second place and the duo battled for several laps. Stefanski would take over second on lap seven and would then start to go after race leader Israel. Israel would pull away from Stefanski and the field to pick up the win, his first of the season.

Based off their times during “Test, Tune, and Time” a few weeks ago, Cole Susice and Matt Hornquist were on the front row for the Sunflowers of Sanborn Mini Stocks feature. With problems to Susice, Hornquist would take over the lead with Dante Mancuso taking over second. Mancuso would look underneath Hornquist for several laps and would take over the lead on lap five with a slide job pass in turn two. Ryan Plante would start to reel in on the top two as the leaders encountered lap traffic. Mancuso would hold off Hornquist to score the win. Plante, Cody Griffin and Brian Melcher would complete the top five.

Jake Bansmer and Greenley George shared the front row for the Kevin’s Carpet Cleaning Novice Sportsman feature and it was George showing the way over Dylan Duhow and Bansmer. Duhow would pass George for the lead on lap six. Duhow went out of shape and hit the turn three wall and rolled just one lap after taking the lead. Duhow climbed out of the car under his own power. The lap seven restart would see George and Bansmer hook bars and the two would come together to bring out the caution. On the restart, Junkin would take over the lead from qualifying heat winner Ken Washburn. Junkin would pull away from the field to pick up the victory.

Next Friday, Atwal Eye Care and SANY New York presents a full card of Krown Undercoating Modifieds, Investor’s Service Sportsman, KiPo Motors Street Stocks, Sunflowers of Sanborn Mini Stocks, and Kevin’s Carpet Cleaning Novice Sportsman. Pit gates will open at 5 p.m. with grandstands opening at 6 p.m. and racing will begin at 7:15 p.m. For those unable to be in attendance, the races will be streamed on www.dirttrackdigest.tv.