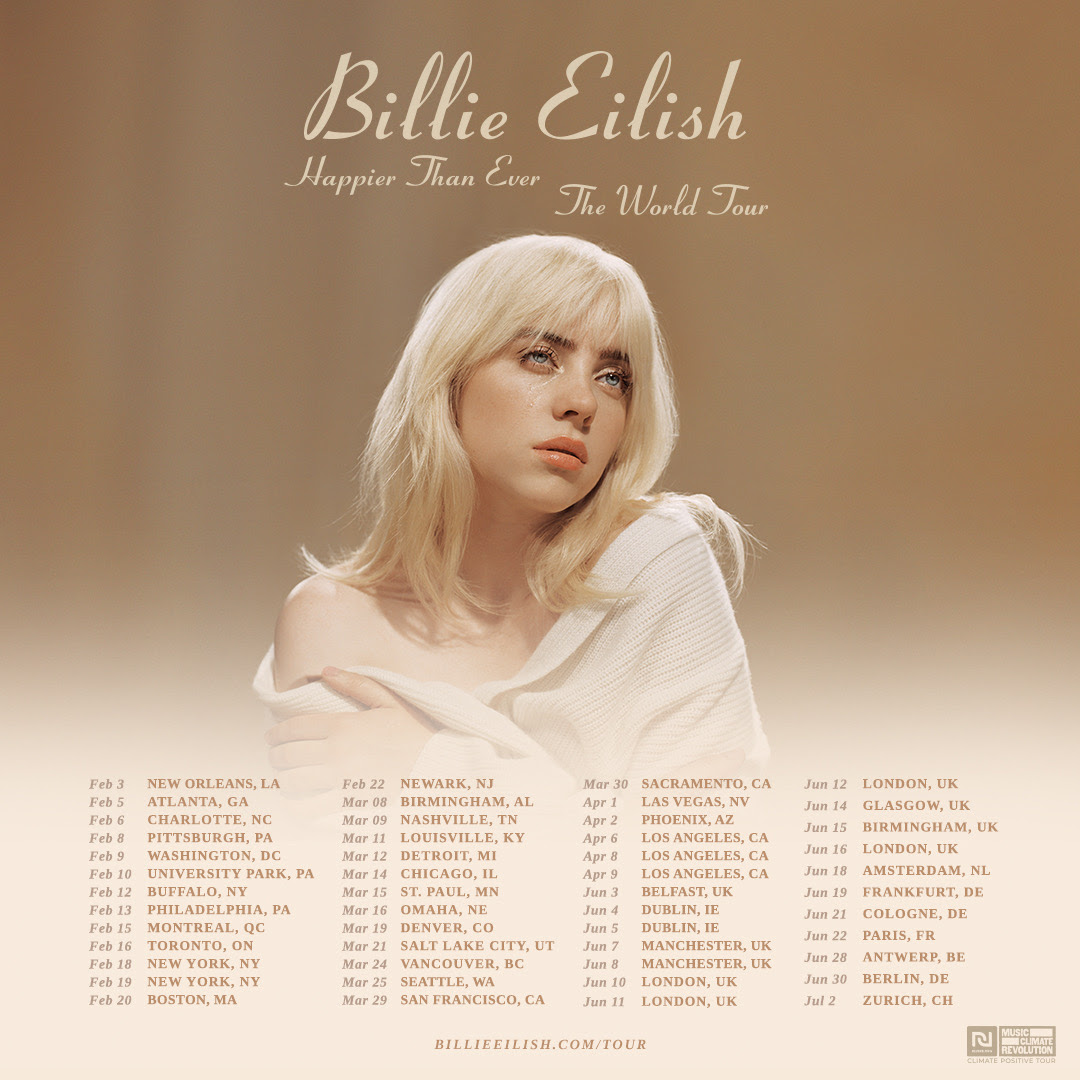 Starting Feb. 3 in New Orleans, the 32-date North American arena run will be making stops across the country before heading across the Atlantic for an 18-date arena tour across Europe and the U.K., starting June 3.

Eilish will perform in Buffalo on Feb. 12.

Remaining tickets will go on sale at noon local time Friday, May 28, in the U.S. and Canada, and 10 a.m. local in the U.K. and Europe.

To ensure tickets get in to the hands of fans, the tour has partnered with Ticketmaster’s Verified Fan platform in North America. Fans can register now through 2:59 a.m. ET Monday, May 24 HERE for the Verified Fan presale. Registered fans who receive a code will have access to purchase tickets before the general public at noon Wednesday, May 26.

The seven-time Grammy Award winning artist and songwriter has also confirmed she will be continuing her work with sustainability partner REVERB for her “Happier Than Ever, The World Tour,” with the fan-facing “Billie Eilish Action Village” at each show focusing on climate action and climate justice, hosting and supporting BIPOC and women-led environmental organizations, as well as a comprehensive program via REVERB’s forthcoming “Music Climate Revolution” campaign.

A press release stated, “In addition to reducing the tour’s environmental footprint, the initiative will support projects that directly and measurably eliminate greenhouse gases. These collective efforts will make the tour climate positive; eliminating significantly more emissions than the tour creates.”

2021 has already been quite the year for 19-year-old Eilish whose latest single, “Your Power,” debuted at No. 10 on the Billboard Hot 100, logging more than 150 million streams in the first two weeks of release. Earlier this year, she took home two Grammy Awards: Record of the Year for “everything i wanted,” and Best Song Written For Visual Media for her James Bond song “No Time To Die.”

In February, her groundbreaking documentary film, “The World’s A Little Blurry” – directed by R.J. Cutler – saw its Apple TV+ global release and received critical praise worldwide. Earlier this month, Eilish made her book debut with “BILLIE EILISH,” a visual narrative journey through her life. Published by Grand Central Publishing (GCP), the book features hundreds of never-before-seen photos, and captures the essence of Billie inside and out, offering readers personal glimpses into her childhood, her life on tour, and more. Get a copy HERE.