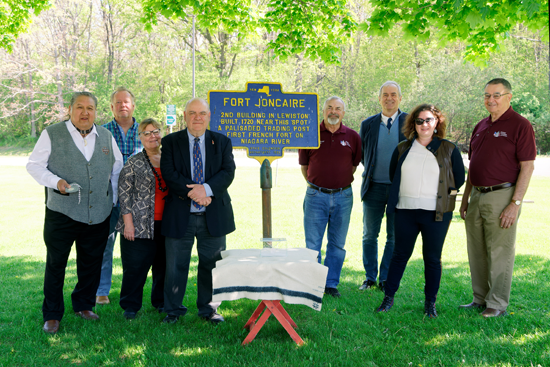 In 2020, seven organizations joined together to commemorate the 300th anniversary of the founding of Le Magazin Royal, a French trading post located where Artpark stands today. Part of that commemoration involved the creation of a limited number of custom-designed medallions. Production was delayed due to the pandemic, but each organization recently received a medallion at the site of the early 18th century trading post.

The commemorative medallions were designed and minted by jeweler Brian Gugino, who has been a gold and silversmith since 1982. Normally, Gugino specializes in the design and creation of engagement rings. But for the past five years, he and his wife, Sylvia, have been reproducing silver works of the 18th century.

“Our sons have been involved in the living history community and encouraged us to bring our skills to Old Fort Niagara. We’ve had a great time meeting the fort's visitors and involving them in the craft,” Brian Gugino said. “The Magazin Royal project was a fascinating collaboration with the Old Fort Niagara Association. They were instrumental in identifying the authentic symbols of the time, which influenced our design. We've placed them in one medallion. Side by side, we can picture what the two cultures had in common, as well as their differences.”

On one side, the Haudenosaunee Tree of Peace is circled by the 50 chiefs who have thrown their weapons of war under it. Atop the tree sits an eagle, to see far and warn of danger. To the right are three fleur-de-lis, the emblem of King Louis XV of France. On the other side of the medallion are Louis XV’s shield and crest. It is surrounded by the design of the Aiionwatha wampum belt, representing the nations of the Haudenosaunee: Mohawk, Oneida, Cayuga, Seneca, Onondaga and Tuscarora.

Originally scheduled for May, the tricentennial of Le Magazin Royal had to be moved into September. A video of the day’s events is available on You Tube. This ceremony officially wrapped up the anniversary celebration.