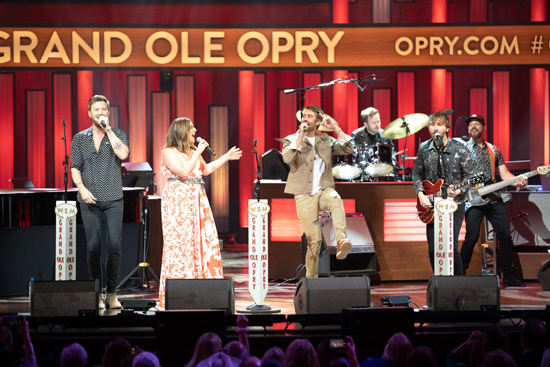 Ryan Hurd joined Lady A for their hit he co-wrote, "What If I Never Get Over You." (Photo by Chris Hollo/ image courtesy of Grand Ole Opry LLC/ Schmidt Relations)

The Grand Ole Opry opened up performances this past weekend to full capacity for the first time in more than a year. The Opry’s two newest members, Lady A and Rhonda Vincent, were among those featured on weekend shows. Both artists officially joined the Opry in the midst of the COVID-19 pandemic.

Two rising artists, Ryan Hurd, and Brittney Spencer, stepped into the circle for the first time, making their Opry debuts on this first full-capacity weekend. Superstar Maren Morris made a surprise appearance with husband Hurd on their hit “Chasing After You,” and Hurd joined Lady A for their hit he co-wrote, “What If I Never Get Over You.”

“It was tremendous to see so many fans who have been tuned in to the Opry via our livestream, television and the radio over the past 15 months back in the Opry House enjoying live music this weekend,” Executive Producer Dan Rogers said. “We’ve missed this, and we look forward to doing it again on every Tuesday, Friday and Saturday the rest of the year!"

In addition to a full lineup of spring and summer performances, the Opry is set to release a limited-edition vinyl LP titled, “Unbroken | Empty Room, Full Circle,” on June 4. Available exclusively on Opry.com and at the Opry’s Nashville-based retail outlets, the LP includes memorable performances by Combs, Reba McEntire, Darius Rucker and others recorded live from the Opry stage in front of an empty house during the 29 weeks the Saturday night Opry shows continued uninterrupted during the early days of the COVID-19 pandemic.