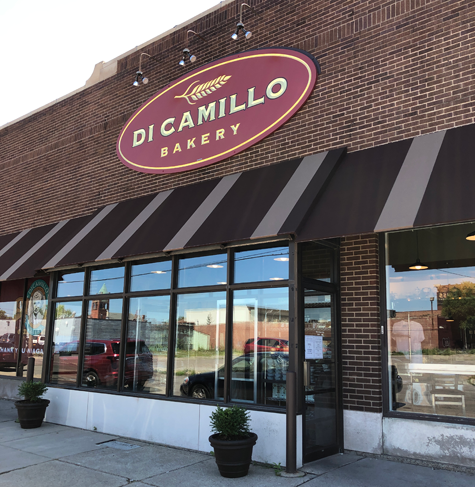 DiCamillo Bakery on Linwood Avenue is a beneficiary of DRI award funding.

Gov. Andrew Cuomo on Friday announced 10 transformational projects for Niagara Falls as part of the $10 million Downtown Revitalization Initiative award. His camp stated, “The strategic investments will strengthen small business, support private investment in underutilized buildings, and bring new residential units, commercial space, and a hotel to the historic Bridge District. The investments are part of the governor's ongoing efforts to revitalize the upstate economy and create more opportunities for the Western Region.”

Cuomo said, "The investments we are making in Niagara Falls as part of the Downtown Revitalization Initiative are a key part of our focus on building New York state back better than ever before. Through the DRI, we are empowering local communities to fulfill their vision for downtown areas that provide plentiful business, residential and recreational opportunities for all. These projects will build on the assets that exist in the world-famous Niagara Falls to help revitalize Western New York."

Lt. Gov. Kathy Hochul said, "As a Western New Yorker and frequent visitor to Niagara Falls, I know the city is a critical economic asset that has so much to offer. Through our Downtown Revitalization Initiative, we are building on Niagara Falls as a world-class tourist destination to create more economic opportunity and further transform the community into a great place to work, play, and raise a family."

Niagara Falls was named a DRI round 4 winner in August 2019.The Bridge District, formerly known as North Main Street or The North End, historically served as the downtown shopping district for Niagara Falls. Today, the district is being reborn with revitalization including the recently completed intermodal train station, new connections to the waterfront and cultural attractions.

A press release stated, “The DRI will capitalize on and complement these improvements, as well as the Robert Moses Parkway Removal project, by supporting the creation of green space, the construction of streetscape improvements with lighting and traffic calming measures, which will help to support planned private investment in the downtown. Additional projects will strengthen small business, support private investment in underutilized buildings, bring new residential units, commercial space and a hotel.”

The specific projects to be funded through the Niagara Falls DRI include:

Renovate 2025 Main Street into Mixed-Use Development – $500,000: Renovation of the existing 9,900-square-foot building to enhance the convenience store, add one retail storefront on Niagara Street on the first floor, and create apartments on the two upper stories.

Complete Implementation of the Freedom Plaza and Overlook – $1,500,000: Site improvements adjacent to the suspension bridge to create a plaza/event space and an overlook to the Niagara River connecting to the trail system and Whirlpool Street. The plan also includes an 18-space parking area for visitors and interpretive artwork and signage.

Create a Public Plaza on Main Street at Cleveland Avenue – $295,000: Create a plaza and event space, inclusive of public art, movable furniture, special paving, and landscaping in front of the Public Safety Building.

Niagara Falls developed a strategic investment plan to revitalize its downtown with $300,000 in planning funds from the $10 million DRI grant. A local planning committee made up of municipal representatives, community leaders and other stakeholders led the effort, supported by a team of private sector experts and state planners. The strategic investment plan for Niagara Falls examined local assets and opportunities and identified economic development, transportation, housing and community projects that align with the community's vision for downtown revitalization and that are poised for implementation.

New York Secretary of State Rossana Rosado said, "Niagara Falls is one of the world's great attractions and these projects will make it a more enjoyable experience for residents and visitors. The Downtown Revitalization Initiative projects bring the next level of development for this landmark community and create an economic boom for the entire Western New York region."

New York State Homes and Community Renewal Commissioner RuthAnne Visnauskas said, "DRI funding unlocks the opportunity for communities to become resurgent. The beauty of the governor's program is that it is directed by the local stakeholders, allowing growth and redevelopment efforts to be determined holistically by those who best know the community and its needs. The 10 awarded projects in Niagara Falls will benefit residents, visitors and businesses alike and bring fresh opportunity and economic growth where it is most urgently needed."

City of Niagara Falls Mayor Robert Restaino said, "I'm grateful for the governor's continued commitment to the Downtown Revitalization Initiative with the selection of these dynamic projects for Niagara Falls. These projects, which were chosen with a great deal of community input, will infuse new life into the community by investing in our cultural and historical assets to ensure our residents and visitors can continue to enjoy these for years to come."

In 2016, Cuomo launched the Downtown Revitalization Initiative. Through the DRI, he moved to aggressively accelerate and expand the revitalization of downtowns and neighborhood to serve as centers of activity and catalysts for investment in all 10 regions of the state. The DRI represents an unprecedented and innovative plan-to-act strategy that couples strategic planning with immediate implementation.

In the first four years of the DRI, the state has committed $400 million to invest in downtowns that are ripe for revitalization and have the potential to become magnets for redevelopment, business, job creation, greater economic and housing diversity, and opportunity. Participating communities are nominated by the state's 10 Regional Economic Development Councils based on the downtown's potential for transformation, and each community is awarded $10 million to develop a downtown strategic investment plan and implement key catalytic projects that advance the community's vision for revitalization. The DRI is chaired by Rosado. Communities receive support from private sector experts and a team of state agency staff led by the Department of State in close partnership with Empire State Development, and NYS Homes and Community Renewal.

More information on the Downtown Revitalization Initiative is available here.