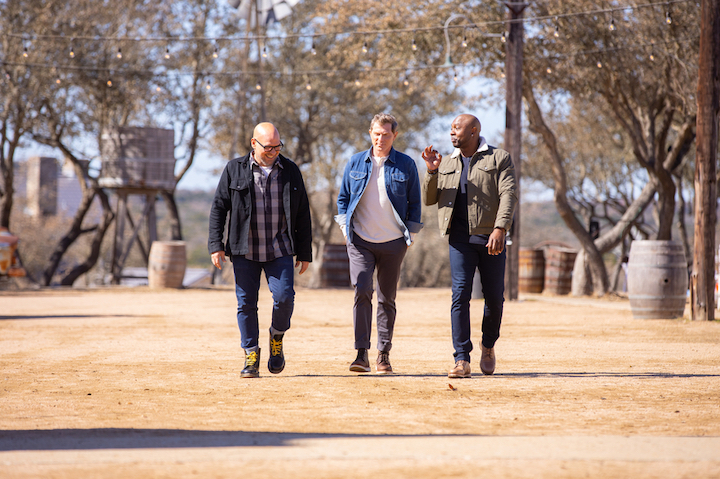 The brawl is back as culinary icons and acclaimed Food Network hosts Bobby Flay and Michael Symon face-off for a rematch on a new season of “BBQ Brawl,” premiering with a special 90-minute episode, Monday, June 14 (9 p.m. ET/PT), on Food Network. However, a new twist is in store for Michael and Bobby as they are joined by a third coach who knows a thing or two about grilling, with Food Network’s Eddie Jackson ready to take the competition to a whole new level.

Through 10 episodes, Bobby, Michael and Eddie mentor and coach 12 talented and buzzworthy barbecue stars from around the country for ultimate bragging rights. Set at the famed Star Hill Ranch in Austin, Texas, the competitors are broken into three teams as they are challenged in each episode with two rounds of barbecue battles that test their individual skills along with how well they work together as a team.

With the captains inspiring their teams every step of the way, a panel of judges featuring barbecue legend Rodney Scott, famed chef Brooke Williamson, and lifestyle personality Carson Kressley, decide which team was least successful each episode, with the competitor deemed the weakest link eliminated. The captains must do everything in their power to keep their team members in the game – including diving into the action themselves – but in the end, only one chef will win the coveted title of “Master of Cue” and appear across Food Network’s digital platforms to become its official barbecue expert for the year, giving tips and tricks to work a grill no matter your skill level.

"Bobby Flay, Michael Symon and Eddie Jackson are Food Network stars with experience in culinary competitions at the highest level, but they have their work cut out for them as they mentor these talented competitors through a fast-paced and highly intense barbecue showdown,” said Courtney White, president of Food Network. “The stakes couldn’t be higher as the captains guide their teams to the finish line to earn bragging rights over each other.”

Bobby, Michael and Eddie get their teams ready as they select their barbecue standouts. Nothing is off limits in hopes of avoiding elimination, with challenges that include the teams exploring the sports side of barbecue, bringing friends and family together around the grill to fire up their team spirit and taste buds. An unexpected twist is in store for the teams in another episode, as fishing comes into play to prove the competitors can handle some delicate seafood just as well as meat. And the competitors put everything on the line heading into the double-episode finale on Monday, Aug. 9, with the remaining team members joining forces with their captains to impress the judges and earn a spot to compete in the ultimate barbecue gauntlet – a super-sized all-day competition filled with surprises that will have one captain and competitor celebrating as champion.

Fans can check out Food Network’s Facebook, Instagram and Twitter platforms for exclusive barbecue how-tos with Bobby, Michael and Eddie, and to get the captains’ best cookout recipes. Join the conversation all season using #BBQBrawl.