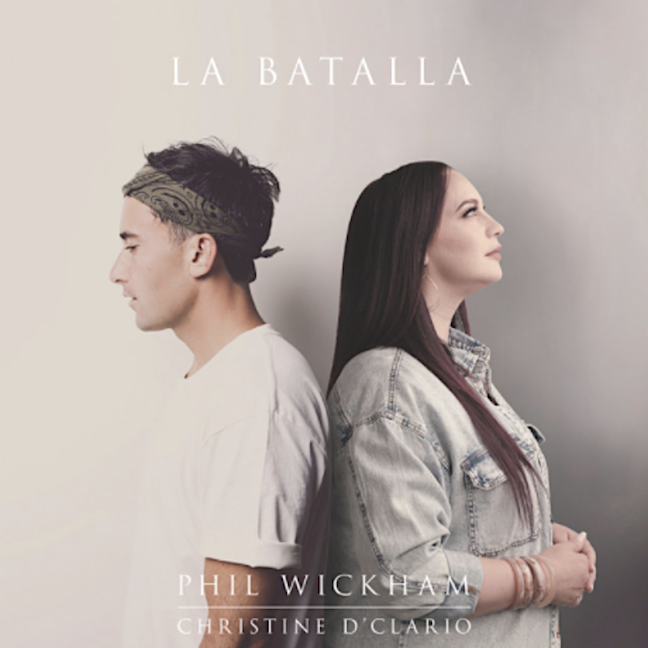 "A huge thank you to Christine for joining me in bringing this version of 'Battle Belongs' to life," Wickham recently shared on his socials. "I hope and pray 'La Batalla' is an encouragement and blessing to my Spanish-speaking brothers and sisters out there!"

He continued, "Growing up in San Diego, there has always been a strong presence of the Spanish-speaking church in my hometown. When I was in youth group, we would take trips down to Mexico to worship with and work alongside the church communities down there. I was always so moved by their passion when we would sing. What an honor to sing with Christine to bring this new version to life."

"Battle Belongs" has spent four weeks at No. 1 on the Billboard National Christian Audience chart, along with topping additional radio charts for multiple weeks. The song was the first to release from Wickham's upcoming album, “Hymn of Heaven,” out June 25.

His latest project, “Hymn of Heaven” (out June 25 via Fair Trade Services), was written during a year when the family of God couldn’t physically gather in houses of worship around the world.

“ ‘Hymn of Heaven’ is full of praise and thankfulness, just lifting up the name of Jesus and speaking what we really know the reality is even though we don’t see it,” he said. “All I want to do is facilitate moments where people can encounter the presence of God.”

Wickham’s music has received hundreds of millions of streams across his catalog and platforms, with his discography including eight full-length projects, multiple Christmas releases, and a series of popular singalong records that capture Wickham’s songs doing what they were always meant to do: giving people language to sing to God.

To find out more, visit PhilWickham.com.

D’Clario is an award-winning singer, songwriter, author, entrepreneur, advocate and one of the most relevant voices of the praise and worship movement in Christian music. In 2005, she released her self-titled album, “Christine D’Clario,” and in 2009, she released her sophomore album, “Sólo Tú...Lo Único Que Quiero,” which internationally launched her as a singer/songwriter.

In 2015, D'Clario made history with her first live album, titled “Eterno Live,” recorded at the Coliseum of Puerto Rico with a diverse audience of 10,000 people and more than 100,000 viewers on simultaneous online live broadcasting. “Eterno Live” was nominated for a Latin Grammy and won the GMA Dove Award for Best Album in Spanish.

In 2018, she recorded her second live album, “Emanuel,” at Luna Park stadium in Buenos Aires, Argentina, featuring special guests Josh Baldwin and Kalley Heiligenthal of Bethel Music. D'Clario was invited by Chris Tomlin to be part of the “Worship Night in America” tour in the U.S. that same year, making her the first Spanish-speaking Latin artist to be part of this nationwide tour. In 2020, she released her collaboration with Tauren Wells, “Tu Poder (Creo En Ti)”, the Spanish version of “Famous For (I Believe),” and last April released “Loco Amor” as a sneak peek of her upcoming music later in the year.

Beyond music, her influence reaches the subjects of music and leadership, motherhood and family life, and advocacy. Since 2015 she's been in partnership with Compassion International and aims to positively impact the long-term development of children living in extreme poverty.

With more than 4 million followers on social media and 1.6 million subscribers on YouTube, she is widely considered a pioneer of the next generation in inspirational music and the prophetic and congregational worship movement. Visit Christinedclario.com.