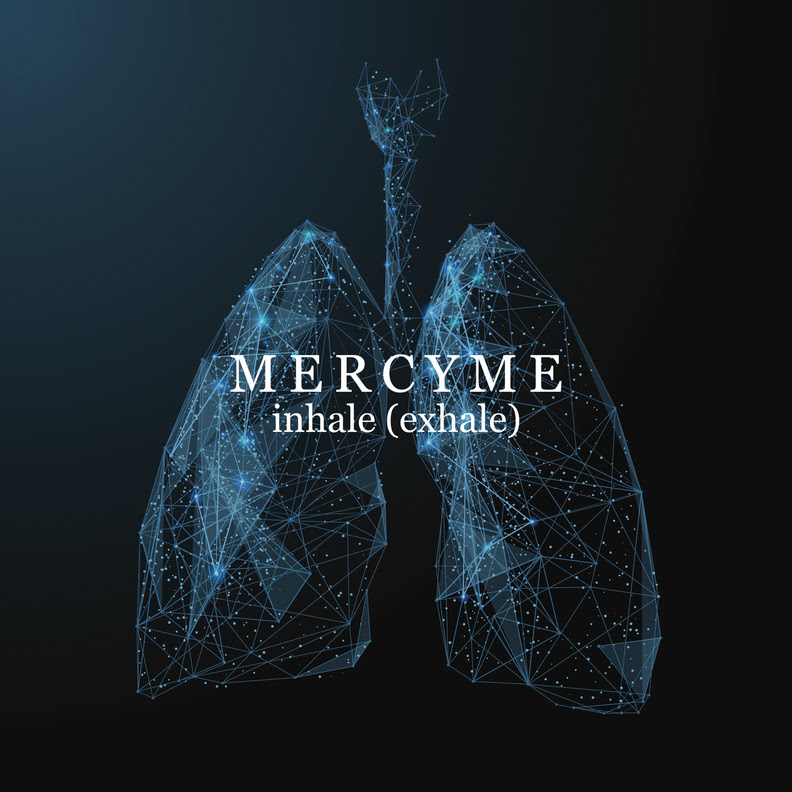 On Saturday morning, members of the band will be on FOX & Friends to talk about the new project before a pretaped performance of their new single, "Say I Won't" is aired.

SiriusXM – The Message (Ch. 63) exclusively premiered the album on their “inhale (exhale) Album Reveal Special,” which will be rebroadcast multiple times throughout this weekend. The special was the first place fans were able to hear the album from top to bottom – hearing the story behind each song as told by the band. Afterward, the band joined SiriusXM listeners in a virtual afterparty in “The Message Blue Room” event, and were joined by special guests featured on the album: Gary LeVox (Rascal Flatts) and Gloria Gaynor.

During the album reveal special, the band was surprised by Melissa Chalos, senior curator of Christian/gospel with music streaming site Pandora, with a plaque presentation welcoming them into the Pandora Billionaires Club, commemorating over a billion streams of MercyMe songs across platform.

Tonight, “The inhale (exhale) Sessions” livestream event with MercyMe will begin at 8 p.m. ET, with tickets available at https://www.momenthouse.com/mercyme.

The event will allow fans to go behind the scenes as the band performs the songs and celebrates the release of “inhale (exhale),” all while reflecting on the journey that brought it to life – all from their studio in Nashville. The event will be available on demand for 48 hours past its initial airing.

Leading up to the album release, MercyMe has made several media appearances, including FOX Nation's special concert episode of “Ainsley's Bible Study,” and an inspirational segment on “Good Morning America's” “GMA3” with their friend and inspiration behind "Say I Won't," Gary Miracle.

With an extensive Billboard feature, CBN News' Studio 5, and many other press hits this week and coming soon, MercyMe will appear on TBN's “Huckabee” on May 15-16, before returning to the Grand Ole Opry for a live Circle TV performance July 10. Tickets are on sale at Opry.com.

A favorite at radio for over two decades, it's no surprise that "Say I Won't" is already topping the national radio charts – No. 4 Billboard National Christian Audience, No. 4 Mediabase Christian Audience, No. 4 Billboard AC Indicator, No. 5 Billboard AC Monitored and No. 5 Mediabase Christian AC – thanks to support of nearly every Christian station in the country playing the song. In support of the single, MercyMe has spoken with 100-plus radio stations over the past six weeks.

In process for over two years, the 16-song collection (produced by Tedd T., Brown Bannister and Jordan Mohilowski) is the latest chapter in MercyMe's creative adventure, and includes “Almost Home,” a poignant anthem that topped the charts for a combined total of 17 weeks. There’s also the buoyant “A Little Love” featuring lead vocalist Bart Millard’s close friend LeVox, of the award-winning country super group Rascal Flatts; disco legend and friend Gaynor on “Brand New"; and "On Our Way," which features Millard's son, Sam Wesley.