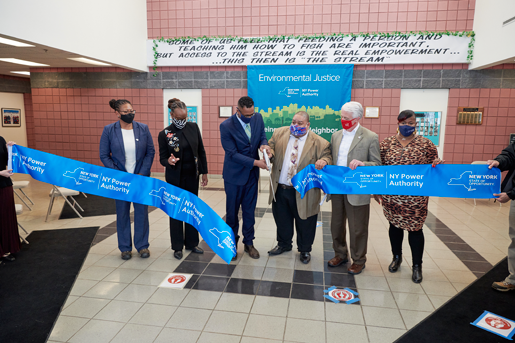 The $568,367 program involved installing 969 energy-efficient LED lighting fixtures, both interior and exterior, at Wrobel Towers, Spallino Towers, Jordan Gardens and Packard Court. Additionally, a commercial building audit was conducted at these four facilities to analyze the building’s energy use and identify extra energy efficiency measures the Housing Authority can take to save energy and reduce its utility bills.

"The installation of nearly 1,000 new energy-efficient fixtures at four Niagara Falls Housing Authority facilities is a win for reducing energy costs and improving public safety," Lt. Gov. Kathy Hochul said. “This is yet another example of how New York state and the New York Power Authority are working to build back better, cleaner and more resilient for the postpandemic future.”​​ 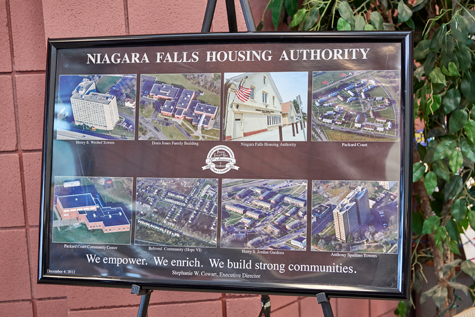 The Niagara Falls program supports the goals of New York's Climate Leadership and Community Protection Act, the most aggressive climate change law in the nation, through the increased use of energy efficiency to annually reduce electricity demand by 3% – equivalent to 1.8 million New York households – by 2025.

A press release stated, “The project is funded by NYPA’s environmental justice program, which provides meaningful programs and services that meet the unique needs of the marginalized communities near its statewide facilities. NYPA’s Niagara Power Project, the largest electricity producer in New York state, is located in Lewiston. Environmental justice staff work with partners to identify opportunities for long-term energy services projects that can be provided at no cost to communities.”

“The Power Authority is committed to being a good neighbor to the communities located near its facilities by providing resources where they’re needed most,” said Lisa Payne Wansley, NYPA vice president of environmental justice. “Niagara Falls Housing Authority residents embody the elderly, low-income and communities of color that the COVID-19 pandemic has disproportionately affected. This energy-efficiency project will directly result in energy savings and allow critical social service resources to be directed to this hard-hit constituency.”

Clifford Scott, NFHA’s executive director, said, “The Niagara Falls Housing Authority chose to partner with the New York Power Authority on this project because it aligns with our goals in providing a safe and secure environment for our residents. As we become more energy efficient with the LED lighting, it will help us to manage our programs in a smart and effective manner and enhance our communities.”

Exterior lights were replaced at Jordan Gardens and Packard Court. Interior lighting, including hallways and common spaces, were upgraded at Spallino and Wrobel Towers.

Harry S. Jordan Gardens is a family site in the city’s north end that offers 100 homes. Packard Court is a centrally located family site with 166 homes. Anthony Spallino Towers is a 15-story 182-unit high rise in the heart of the city. Henry E. Wrobel Towers, at the foot of Main Street, is a 13-story, 250-unit high rise. Center Court homes, also known as the Beloved Community, is a multilayered development consisting of 150 public units and 65 tax credit homes.

The Housing Authority also owns and operates the Doris Jones Family Resource Building and the Packard Court Community Center, which offer educational, cultural, recreational and social programs and services to improve self-sufficiency and quality of life to residents and the Niagara Falls community.

The press release noted, “LED lighting is more efficient than fluorescent bulbs and can potentially last three times as long, paying itself off in the long run. They don’t flicker and provide full brightness as soon as they are turned on, more closely resemble natural light, and are more impact resistant. The bulbs conserve energy and reduce the greenhouse gas emissions associated with energy use. NYPA’s project will save an estimated 12.3 metric tons of greenhouse gases.” 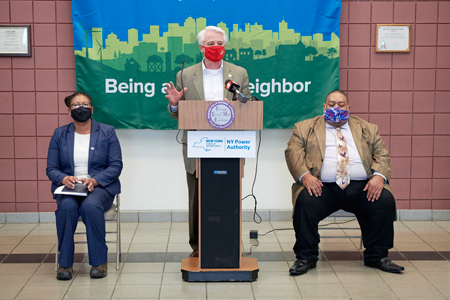 Mayor Robert Restaino (above, center) said, “The City of Niagara Falls is pleased to see that our partners at the Niagara Falls Housing Authority have had energy-efficient lighting installed at various locations. It is the intention of our city to work toward energy efficiencies along various aspects of our community. The continued relationship between the New York Power Authority and the City of Niagara Falls is vital to our continued growth and development. I am grateful to NYPA for their contribution to this upgrade project.”

Niagara County Legislator Owen Steed said, “I would like to thank the NFHA and the Power Authority for the LED lights planned for the north end. As a former board member of the NFHA. and a current tenant and legislator who lives where the lights are installed, it's great to see continued dedication to the mission of safe, affordable and decent housing.”

NYPA plans to offer residents living in Housing Authority buildings some of its regular programming, such as STEM (science, technology, engineering and math) classes, weatherization workshops and a community education day with fun and educational STEM/sustainability games for youth once COVID-19 restrictions ease up.

NYPA is also working with cities, towns, villages and counties throughout New York to convert existing street lighting systems to energy-efficient LED to save taxpayer dollars, provide better lighting, reduce energy use and subsequently decrease a community’s impact on the environment.