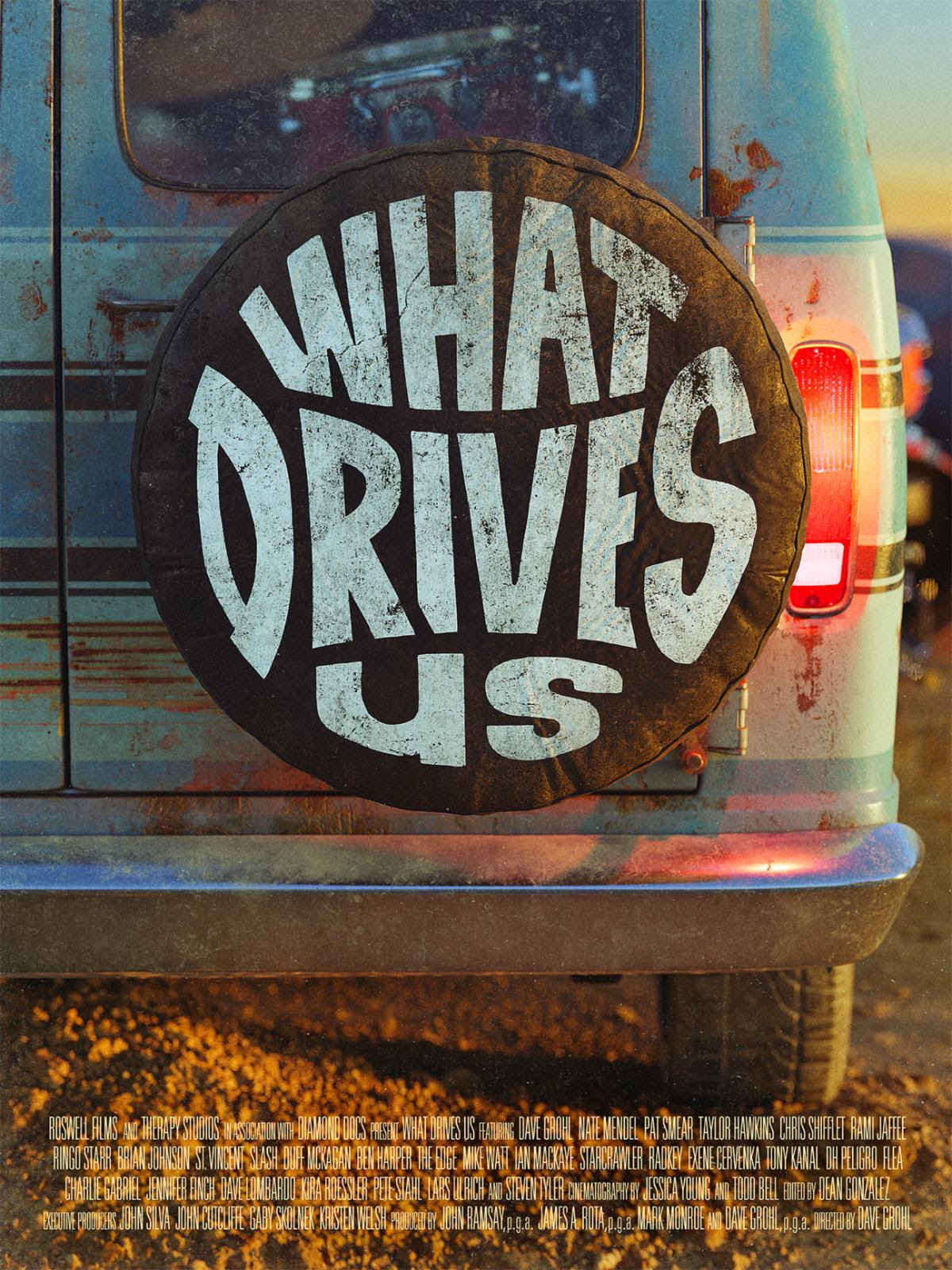 "What Drives Us" (Image courtesy of BB Gun Press)

The Coda Collection has acquired global rights to the feature-length documentary film “What Drives Us,” directed by Dave Grohl and produced by Foo Fighters. “What Drives Us” will be released in the U.S. on Friday, April 30, exclusively on The Coda Collection – a unique, subscription streaming offering featuring an exclusive, curated selection of iconic music documentaries, concert films, and episodic series via Amazon Prime Video Channels, paired with a complimentary website exploring new perspectives on music. “What Drives Us” will be available outside of the U.S. via Amazon Prime Video.

Watch the official trailer for “What Drives Us” HERE. To learn more, click HERE.

“This film is my love letter to every musician that has ever jumped in an old van with their friends and left it all behind for the simple reward of playing music,” Grohl said. “What started as a project to pull back the curtain on the DIY logistics of stuffing all of your friends and equipment into a small space for months on end eventually turned into an exploration of ‘why?’ What drives us?’ ”

A press release stated, “’ What Drives Us’ is an homage to the moment in every musician’s life when their commitment is tested and their desire to play music for others becomes an almost irrational act of blind faith. The first step to prove to yourself and the world that you belong is to load up your instruments, your talent and your courage, and get in the van to take your music to the world – a true rock ‘n’ roll rite of passage.

“The documentary is also a tribute to every young kid who dreams of a life playing music. Dave was that kid. As were Ringo Starr, The Edge, Annie Clark, Steven Tyler, Ian Mackaye and everyone in between. The list goes on forever. While they all have stories – outrageous, unbelievable, insane, as well as poignant stories – they all share a common bond. At some point, before anyone knew their name, they had an unstoppable drive to share their music with the world. Their passion led them to leave everything behind, throw caution to the wind, and chase their dream.

“ ‘What Drives Us’ follows young bands RadKey and Starcrawler who are taking on the world one town at a time, while also telling stories of the biggest artists in the music industry, recalling the romance and adventure, as well as the insanity and chaos, of their own time on the road. The film explores what it takes to turn a van into a home, and how the tricks of this trade have been handed down through the decades. There was a time before the digital age when players had to take the music to the people one show, one overnight drive, one dilapidated little club at a time. While the world has changed, the rite of passage has not. There is no other first step on the path to making it in music. You have to get in the van.”

A Roswell Films / Therapy Studios production, “What Drives Us” was directed by Grohl, produced by John Ramsay, James A Rota, Mark Monroe, and Foo Fighters, and edited by Dean Gonzalez. Jessica Young was the director of photography and Brandon Kim was the sound designer and mixer.

The Coda Collection features a highly curated library of the most sought-after concert films, music documentaries and episodic series – bringing music’s untold stories to life and deepening the connection between fans and artists. The Coda Collection offers hundreds of hours of exclusive concert and documentary content from artists ranging from such legendary icons as Jimi Hendrix, the Rolling Stones to contemporary premieres of new material by such diverse artists as Evanescence, Billy Strings and Jane’s Addiction.

The Coda Collection said its acquisition of Grohl’s “What Drives Us” “signals the arrival of the new global home for the best music-centric original content and storytelling.”

The Coda Collection is available to Amazon Prime members in the U.S. now for $4.99 per month, with a free seven-day trial, and will roll out globally throughout the rest of 2021. To see the complete library of titles available to stream exclusively on The Coda Collection and explore new perspectives on the artists and performances surrounding the most iconic moments in music, visit www.codacollection.co.

Grohl has been one of the most beloved and respected figures on the international music scene since his recorded debut with Nirvana on 1991's generation-defining “Nevermind.” He took center stage with Foo Fighters' 1995 self-titled debut, the first album in a massive 12-Grammy-winning catalogue, including the band’s most recent release “Medicine at Midnight” (2021). Grohl has a well-earned reputation as a prolific collaborator through his work with Paul McCartney, Them Crooked Vultures, Queens of the Stone Age, late legends David Bowie and Lemmy Kilmister, as well as Mick Jagger, Neil Young, Elton John, Nine Inch Nails, Roger Taylor and Brian May of Queen, to name a few.

In 2013, Grohl made his debut as a feature director/producer with the acclaimed documentary “Sound City” about the Van Nuys, California, studio where Nirvana recorded “Nevermind” in 1991. That album would sell more than 30 million copies and transform the modern musical landscape.

Premiering to unanimous raves at Sundance and achieving a 100% Rotten Tomatoes rating, “Sound City” focused both on the history of the legendary studio and on the ongoing fight to preserve the human element of music. Grohl also directed the eight-part HBO docuseries “Foo Fighters: Sonic Highways,” which premiered in October 2014 and went on to win two of the four Emmys for which it was nominated (Outstanding Sound Mixing for Nonfiction Programming and Outstanding Sound Editing for Nonfiction Programming).

The Coda Collection is a multimedia company founded by a team of legendary musicians, music industry veterans, and entrepreneurs that enables fans to see the most iconic moments and artists in music with a new perspective. For more information, go to www.codacollection.co.