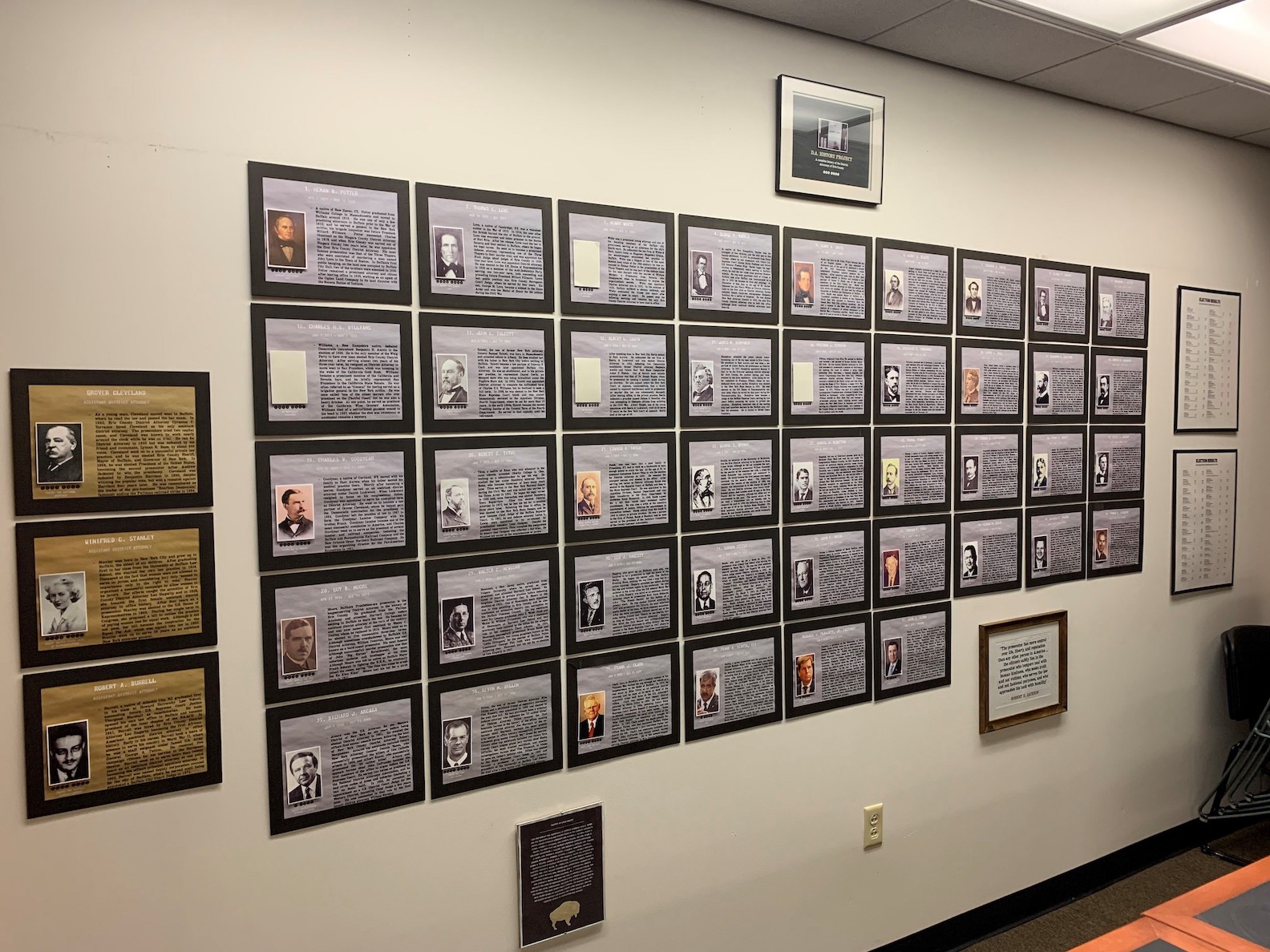 Erie County District Attorney John J. Flynn announced his office, along with Erie County, will celebrate its bicentennial on Friday. Flynn, who is serving as 41st DA for Erie County, commemorates the work of past DA and prosecutors by sharing history of the office.

On April 2, 1821, Erie County was officially established from a portion of land previously governed under Niagara County. Herman B. Potter, who previously worked as a prosecutor in Niagara County, was appointed by the court to serve as Erie County’s first district attorney. Erie County DA was an appointed position until the role became an elected official in 1847.

The Erie County District Attorney’s Office was originally located at the Buffalo Courthouse near Lafayette Square, the present site of the Buffalo & Erie County Public Library. In 1876, the DA’s office was moved to Old County Hall, which held offices for the county, City of Buffalo and the courthouse. The office was relocated again in 1964 to its present location inside the Erie County Court building.

One of the most notable criminal cases handled by the office was under District Attorney Thomas Penney who successfully prosecuted the case against Leon Czolgosz, the man who fatally shot President William B. McKinley during the Pan-American Exposition in Buffalo in 1901. The Erie County DA’s Office is the only local prosecutor’s office in the nation to convict a presidential assassin.

Other historic cases prosecuted by the Erie County DA’s Office include:

•In 1887, DA George T. Quinby prosecuted five oil executives, including three from the powerful Standard Oil Co., for conspiracy to injure trade and commerce. The crime was destroying an independent oil refinery in Buffalo by convincing the foreman to sabotage the company. Quinby attempted to tie Standard Oil to the conspiracy by putting its president, John D. Rockefeller, on the witness stand. He was unable to get a straight answer out of Rockefeller, and the judge issued a directed verdict of not guilty against the three Standard Oil defendants. However, the publicity from the trial contributed to the opening of a congressional investigation, which resulted in the passage of the Sherman Antitrust Act of 1890. Years later, President Theodore Roosevelt would use this law to break up some of the biggest companies in America – including Standard Oil.

•In 1889, DA Quinby prosecuted William Kemmler for murdering his common law wife with an axe handle. After Kemmler was convicted, he became the first person in American history sentenced to death by the electric chair. The office found itself in the middle of the War of the Currents, a vicious competition between Thomas Edison’s direct current and the alternating current of George Westinghouse and Nikola Tesla. Edison and his allies engaged in a smear campaign against AC, and they arranged for a Westinghouse dynamo to be used in Kemmler’s execution in an attempt to show the public how dangerous it was. Hearings were held, and the case went all the way to the U.S. Supreme Court, but the electric chair was found not to violate the Eighth Amendment. The execution went terribly wrong – although it did produce Kemmler’s death – and a shaken Quinby collapsed on his way out of the death chamber.

•In 1893 and ’94, DA Quinby and ADA Daniel Kenefick prosecuted several members of the political machine of William F. “Blue-Eyed Billy” Sheehan for attempting to steal local elections in Buffalo in 1892 and '93 – including the office of DA. Sheehan was the New York lieutenant governor, and the tactics of his heelers ranged from changing voting returns to assaulting people who were in line to vote for an opposing candidate. No convictions were obtained, with the juries suspected of having been rigged by Sheehan, but the bad publicity broke Sheehan’s hold over local politics and ended his career in elected office. The stress of the election stealing cases took its toll on Quinby, and in the middle of one summation, he fell into Kenefick's arms and burst into tears. He resigned after suffering a nervous breakdown and died at 46 one year later. Kenefick succeeded him, becoming the first Irish-American DA in Erie County history.

•In 1899, DA Thomas Penney successfully prosecuted David Nugent, the chief henchman of dock boss William J. “Fingy” Conners for shooting a laborer who supported the Grain Scoopers Strike of 1899, one of the biggest victories for labor in American history.

•Following the resurgence of the KKK in the 1920s, DA Guy Moore prosecuted George Bryant, the local leader of the KKK, for violating the Walker Act, a law that required the KKK to disclose its membership. The prosecution came a few days after the death of Eddie Obertean, a former Buffalo Police Officer whom Buffalo Mayor Frank Schwab had enlisted to infiltrate the local KKK. After Obertean obtained the membership list, Bryant and a KKK investigator followed his car one evening, leading to a confrontation. Obertean and the investigator opened fire, killing each other. The KKK’s membership list was made public, and the DA’s office successfully defended the constitutionality of the Walker Act in a case that went all the way to the U.S. Supreme Court. The KKK never again had a major presence in Buffalo or any other northern city.

•DA Leo Hagerty hired the first female ADA, Winifred Stanley, in 1938 and the first African American ADA, Robert Burrell, in 1941. He spent his entire nine-year career as DA going after the local mafia, especially underboss Joe DiCarlo. In his first year as DA, the police had to guard Hagerty’s house to ensure the safety of his family. After Hagerty convicted him for the third time, DiCarlo moved out of Buffalo, saying “there’s no use staying in town as long as Hagerty is district attorney.”

Among the many high-profile homicide cases prosecuted by this office, the Erie County District Attorney’s Office has convicted three known serial killers.

•Altemio Sanchez, also known as the "Bike Path Rapist," was prosecuted by then Assistant District Attorney Frank A. Sedita, III, who was later elected as district attorney. The defendant raped and murdered at least three women between 1990 and 2006, but is believed to be responsible for numerous sexual assaults in the Buffalo area since 1975. Sanchez pleaded guilty to three counts of murder in the second degree. He is currently serving a sentence of 75 years to life in prison at the Clinton Correctional Facility.

•Joseph G. Christopher, also known as "The .22 Caliber Killer," was prosecuted under the leadership of former District Attorney Edward C. Cosgrove. The defendant, who terrorized the African American community in 1980, was convicted of murdering four men. He is also believed to be responsible for the deaths of two other black men. He died in state prison in 1993.

•J. Frank Hickey, also known as the “Postcard Killer,” was convicted of murder in 1912. He was responsible for the death of at least three people, including two young boys. He sent a cruel postcard to the family of one of his victims. He died in state prison in 1922.

“As I enter my second term in office, it has been my privilege to serve the people of Erie County as their district attorney,” Flynn said. “I, along with the prosecutors and staff in my office, strive to make this community a safe place to live by holding offenders accountable and bringing justice to those who have been affected by crime. I want to recognize the work of my numerous predecessors who have strived to do the same for the people of Erie County.”

To preserve the history of the office, Assistant District Attorney David A. Heraty gathered information on those who have previously served as Erie County district attorney, which is displayed in the library of the DA’s office inside the Erie County Court building (pictured). ADA Heraty currently serves in the office’s appeals bureau.