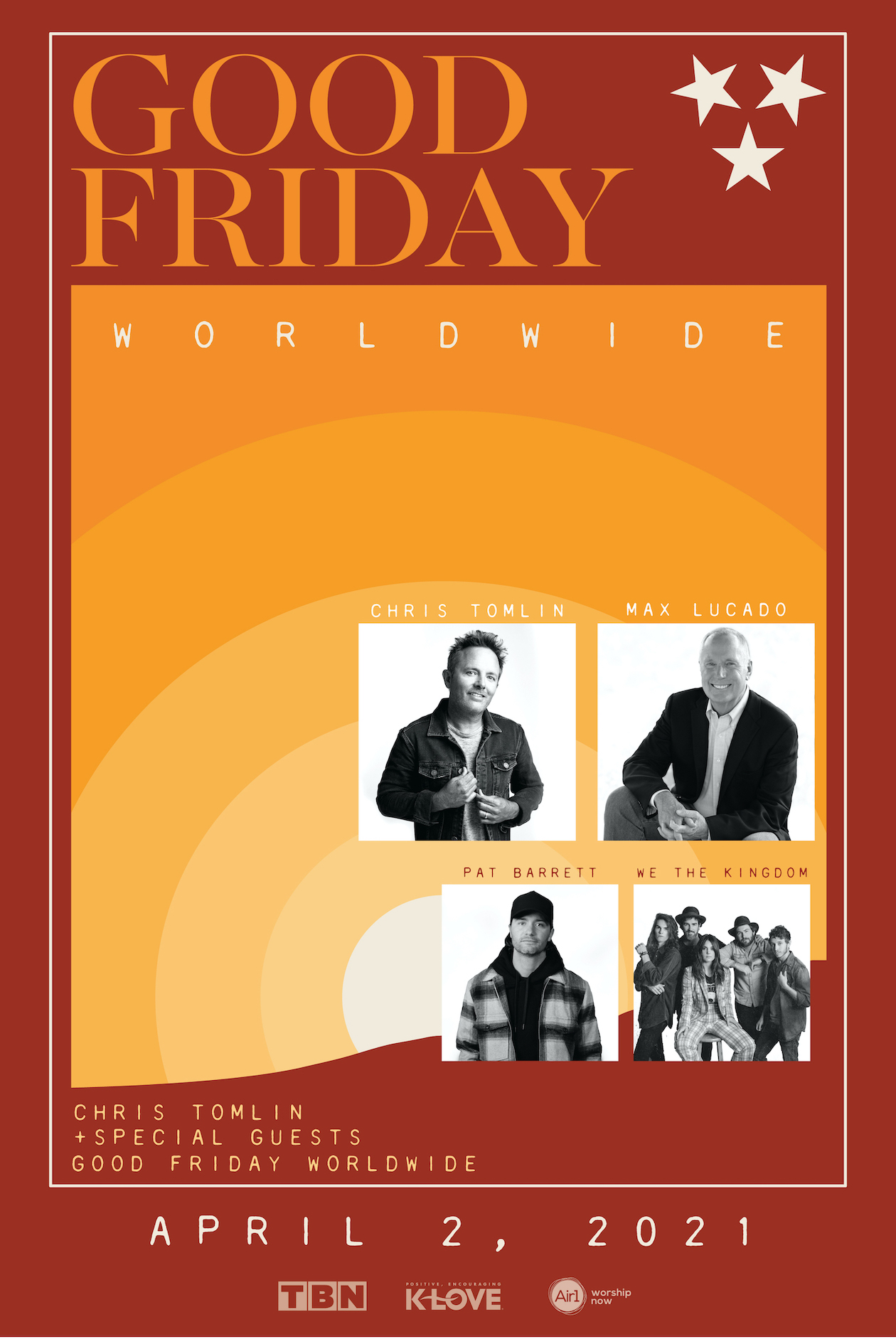 After a difficult year of global hardship and loss, Grammy Award-winning artist Chris Tomlin joins forces again with Max Lucado, K-LOVE, radio stations all around the country, and TBN for a second year in a row for “Good Friday Worldwide.”

A press release stated, “In the spirit of unity and collaboration, everyone has brought their unique gifts, audiences and voices together to meet people wherever they are, all at the same time and in the same moment across this world, to deliver the message of hope that comes from the cross while uniting the church in worship.

“ ‘Good Friday Worldwide’ with Chris Tomlin and Max Lucado will feature an impactful and timely message from Max and worship led by Chris along with Pat Barrett and We The Kingdom, which will air on Friday, April 2, at 7 p.m. CT/ 8 p.m. ET. In the spirit of Good Friday Nashville and its history of surprise guests, the program will also feature an unannounced award-winning musical guest for an unforgettable and powerful moment.”

“Good Friday Worldwide” will simulcast with radio partners K-LOVE and Air1, as well as over 30 additional radio stations across the country. The television broadcast alone will be seen and heard in more than 32 countries.

“This is a moment aligned by God to touch millions of lives,” Tomlin said. “One of the effects of this season and quarantine has been that the face of worship has changed. We aren’t going to a physical church every Sunday. We aren’t gathering in person with our community each week. We have been challenged to find new ways to not only engage ourselves and our families, but also our community in worship. What I know is that the heart of worship hasn’t changed, and I am so grateful for Max Lucado, K-LOVE, the other partnering radio stations, TBN and all the people involved for being willing to come together to help deliver a message of hope and remind us the meaning and power of worship. This is a unique moment in time and there is an opportunity for this to be one of the most impactful Easter weekends we will ever experience in our lifetime.”

Lucado said, “Seldom have we needed a Good Friday as we do this year. We’ve been tested, challenged and stretched. We need a refreshing return to the One who surrendered all on our behalf. Please join Chris, friends and me as we gather at the foot of the cross."

Bill Reeves, CEO of Educational Media Foundation, said, “We’re grateful for K-LOVE and Air1 to partner with TBN and these talented artists and speakers as together we share the hope of Jesus with people around the world. We’re excited that this collaboration offers so many opportunities – TV, radio, streaming and social media – for people to hear about, remember and celebrate God’s love.”

TBN Chairman Matt Crouch said, “This Good Friday believers across the earth will take time out of their day to reflect on the meaning of Christ’s suffering and death. Here at TBN, we’re blessed to welcome Chris Tomlin and Pastor Max Lucado and some talented worship artists as we invite viewers to join us in thanking Jesus for his incomparable gift of salvation.”

Since its inception in 2017, when it broke the attendance record as the largest ticketed Christian concert in the history of Bridgestone Arena, “Good Friday Nashville” has sold-out each year. In 2019, the concert smashed that earlier history-making attendance record.”

Tomlin spoke with the Tennessean about this year’s “Good Friday Worldwide” and his pledge to return to “Good Friday Nashville” on April 15, 2022 – and indefinitely in years forward – to make an impact in Music City and Tennessee by donating proceeds back to the communities.

It is estimated 20-30 million people across the world sing one of Tomlin’s songs every week in church services in nearly every language. Time magazine heralded him as the “most often sung artist in the world” as his music has inspired and uplifted an entire generation of believers. Along the way, he has scored 17 No. 1 singles at radio, placed 29 Top 10 hits (more than any other Christian artist), sold more than 9 million albums, earned a Grammy, three Billboard Music Awards, 21 Dove Awards, became a two-time BMI Songwriter of the Year honoree and received his first-ever Country Music Association Awards nomination last year for “Be A Light” with Thomas Rhett, Reba McEntire, Hillary Scott and Keith Urban.

The song is currently nominated at the upcoming Academy of Country Music Awards on April 18 in the Music Event category.

In 2016, Tomlin was named one of only four artists ever to receive the Sound Exchange Digital Radio Award for over 1 Billion digital radio streams, alongside Justin Timberlake, Pitbull and Garth Brooks. He is also the first Christian artist to reach the billion streams threshold on Pandora and was presented with the BILLIONAIRE award. His tours have sold-out venues everywhere, including New York City’s Madison Square Garden, Hollywood Bowl in Los Angeles, Nashville’s Bridgestone Arena and Red Rocks.

Lucado is a leading inspirational author in the U.S. with more than 140 million books in print in over 54 languages. His writings have been shaped into bestselling books, videos, devotionals, songs, greeting cards, booklets, Bible studies, commentaries and theatrically released movies. According to a LifeWay national survey, 1 in 6 Americans are familiar with Lucado, while 1 in 7 Americans have read a Lucado book. He has been featured on countless national media outlets, including “Today,” “Good Morning America,” “Huckabee” and “Fox & Friends.”

Educational Media Foundation (EMF) began as a single, nonprofit radio station in Northern California in 1982 and is now the parent company to K-LOVE and Air1 – the nation’s largest contemporary Christian radio networks. Broadcasting on more than 1,000 signals across all 50 states, EMF is also among the top 10 U.S.-based audio streaming companies.

EMF acquired the assets of WTA to create WTA Media LLC (a leader in faith-based films and publishing) in 2019 and launched AccessMore (a faith-focused podcast network) in 2020. The ministry continues to expand and to create compelling media that inspires and encourages audiences to have a meaningful relationship with Jesus Christ.

Trinity Broadcasting Network is the world's largest and most watched faith-and-family broadcaster, reaching more than 175 nations across the earth with inspirational and entertaining programming 24 hours a day in 14 languages and on 32 global networks. As the world's most influential nonprofit religious broadcaster, TBN has led the way in expanding the impact of faith-based television across the earth through the creation of innovative content designed to reach every viewer demographic with the life-changing message of hope and grace. To find out more about the TBN Networks, tbn.org.