Gov. Andrew Cuomo on Friday announced the Buffalo Heritage Carousel project at Canalside is nearing completion. A steel frame, the organ and the carousel itself are being installed inside the new timber frame building at Canalside. When complete, the historic De Angelis Carousel will be a year-round, family-friendly attraction for the Buffalo waterfront, building on the popularity of the Explore & More Children's Museum and many other activities for visitors of all ages. The carousel is planned to open this summer.

"The De Angelis Carousel is another layer in the exciting transformation of Buffalo's spectacular waterfront," Cuomo said. "As we continue to reopen our economy and build back better, this milestone on such a colorful and historic attraction is a reminder of the state's long-standing commitment to projects like Canalside and the overall revitalization of a city known for its can-do attitude."

The first of the antique carousel pieces that have been meticulously restored by the Buffalo Heritage Carousel artists were moved into the roundhouse Friday. The #153 Wurlitzer Band organ, one of the most popular models ever manufactured at Wurlitzer, was also installed. It will play music scrolls that will be integrated with the carousel through computer technology. 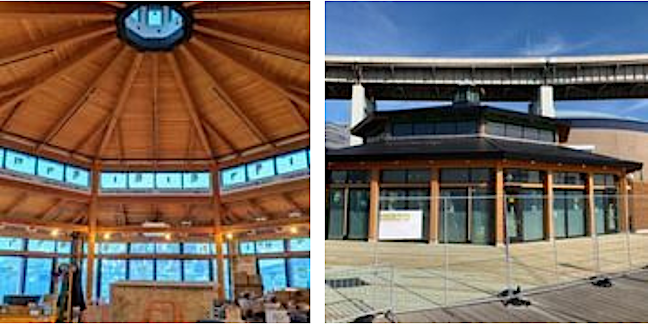 (Images courtesy of the Office of Gov. Andrew M. Cuomo)

ECHDC Chairman Robert Gioia said, "Buffalo's waterfront has seen a remarkable transformation and the Buffalo Heritage Carousel will be a sensational attraction that will build on the progress, helping to draw even more visitors to Canalside. We look forward to welcoming families to enjoy the colorful carousel. It will be a sensational experience that is designed to complement the Explore & More Children's Museum and the Longshed project, which opened last year."

The carousel sits on a custom-made steel structure manufactured by Carousel and Carvings, out of Marion, Ohio. The steel components will be welded and bolted in place to support the vintage menagerie, park-style carousel that was manufactured in 1924 by Spillman Engineering in North Tonawanda for Dominick De Angelis. The carousel was in operation until the 1950s at which point it was stored by the De Angelis family until Buffalo Heritage Carousel acquired it in 2016 with the generous support of the Margaret L. Wendt Foundation with a goal of providing family-oriented recreation on Buffalo's waterfront and to celebrate Western New York's industrial heritage.

Board President of Buffalo Heritage Carousel Inc. Laurie A. Hauer-LaDuca said, "The Buffalo Heritage Carousel's mission to bring a locally manufactured, historical wood carousel powered by the sun to the Buffalo Community as a family attraction is nearing its opening day due to the tremendous support of many who had faith in our vision. We sincerely appreciate the tremendous efforts and dedication of our restoration volunteers who have spent significant time on restoring our carousel animals and rounding boards in our restoration workshop. We are thrilled to celebrate the great strides we have made in making our carousel project a reality and anxiously await our carousel's grand opening day, when it can be enjoyed and appreciated by families once again and be the jewel of Canalside."

The $5.8 million project – which includes $4 million for the roundhouse building, $1 million for the carousel, and $800,000 for operations – was supported by more than $1.2 million from the Erie Canal Harbor Development Corp., with funding that stems from New York Power Authority dollars committed to the region as a result of the federal relicensing of the Niagara Power Project in 2007. An additional $465,000 was provided through the Buffalo and Erie County Greenway Committee, which is also funded by NYPA. KeyBank and the First Niagara Foundation provided $1.2 million in grant funding.

In addition, New York State Sen. Sean Ryan secured a grant of $600,000 for the carousel restoration, New York State Sen. Chris Jacobs secured a grant of $500,000 for the building, and the Buffalo and Erie County Greenway Commission awarded $464,824 for capital expenses, carousel and utility expenses. The Margaret L Wendt Foundation was the first donor of $250,000 for the acquisition of the carousel and most recently another $250,000 toward the capital campaign that matched a $250,000 grant from the Ralph C. Wilson, Jr. Foundation and also the Russell J. Salvatore Foundation. Wegmans is among other business and individuals to adopt one of our menagerie animals or contributing to the project campaign.

NYPA Chairman John R. Koelmel said, "NYPA's support toward this project, including the recent grant award by the Buffalo and Erie County Greenway Standing Committee, is a demonstration of the Power Authority's commitment to the development of Canalside. The restored carousel will be a wonderful attraction for local residents and tourists alike."

The state has committed more than $90 million to transform Buffalo's Inner Harbor into what is now known as Canalside, a mixed-use urban entertainment destination that has received national and international attention as one of the key drivers of the resurgence of Western New York. Open to the public since May 2008, Canalside features several fully restored facets of the original Erie Canal, including the commercial slip, boardwalk and the historic replica canals.

A year-round attraction that traditionally hosts nearly 1.5 million visitors annually, Canalside is working during the pandemic to continue to provide a limited assortment of events, family activities, attractions, historical and cultural programming, art and food that showcases the diverse resources of the Western New York region. In addition, the historic replica canals are frozen in the winter months to become New York state's largest outdoor ice-skating rink.

Congressman Brian Higgins said, "At Canalside, we are rebuilding our future and creating destinations that are uniquely Buffalo by highlighting a past that is all our own. The history of the Erie Canal, the Longshed, U.S. battleships and now the carousel are reimagined for the visitors of today and tomorrow. We are thrilled to add another family-friendly stop along Buffalo's waterfront."

Ryan said, "As we continue our recovery from the COVID-19 pandemic, a thriving Canalside featuring the Buffalo Heritage Carousel will be an important part of our region's economic revival. The carousel will be an affordable attraction complementing the existing amenities at Canalside and will draw families from far and wide to help spur that revival. The Buffalo Heritage Carousel is a symbol of our region's progress, and I look forward to the opening of a new year-round Canalside attraction."

Assemblyman Jon Rivera said, "The Buffalo Heritage Carousel is a great fit for Canalside. It adds another piece of the region's history into the incredible revival of Buffalo's waterfront. Volunteers have meticulously brought the nearly 100-year-old carousel back to life and now people will be able to enjoy it for decades to come."

Assembly Majority Leader Crystal Peoples-Stokes said, "I would like to congratulate everyone involved in the construction of the Buffalo Heritage Carousel, especially the volunteers that helped hand paint. This is a wonderful addition to Canalside to provide even more safe and fun family entertainment. It's also a great history lesson for kids and adults alike of the carousel and the solar panels all being built in Western New York."

City of Buffalo Mayor Byron Brown said, "The arrival of the carousel elements is an exciting step toward to the opening of De Angelis Carousel. The carousel will be another year-round, family friendly attraction for the Buffalo waterfront, building on the popularity of the Explore & More Children's Museum, and many outdoor activities for visitors of all ages. This is yet another major investment made possible by Gov. Andrew Cuomo and the Empire State Development Corp. to assist the City of Buffalo in making its waterfront a world-class destination."

Buffalo Heritage Carousel Inc. was formed as a 501(c)(3) nonprofit organization to purchase and restore a vintage menagerie, park-style carousel that was manufactured in 1924 by Spillman Engineering in North Tonawanda and to house the carousel in a building at a revitalized urban waterfront at Canalside. The carousel will be solar-powered. The mission of Buffalo Heritage Carousel Inc. is to provide entertainment, education and to celebrate the history of carousel manufacturing in Western New York.