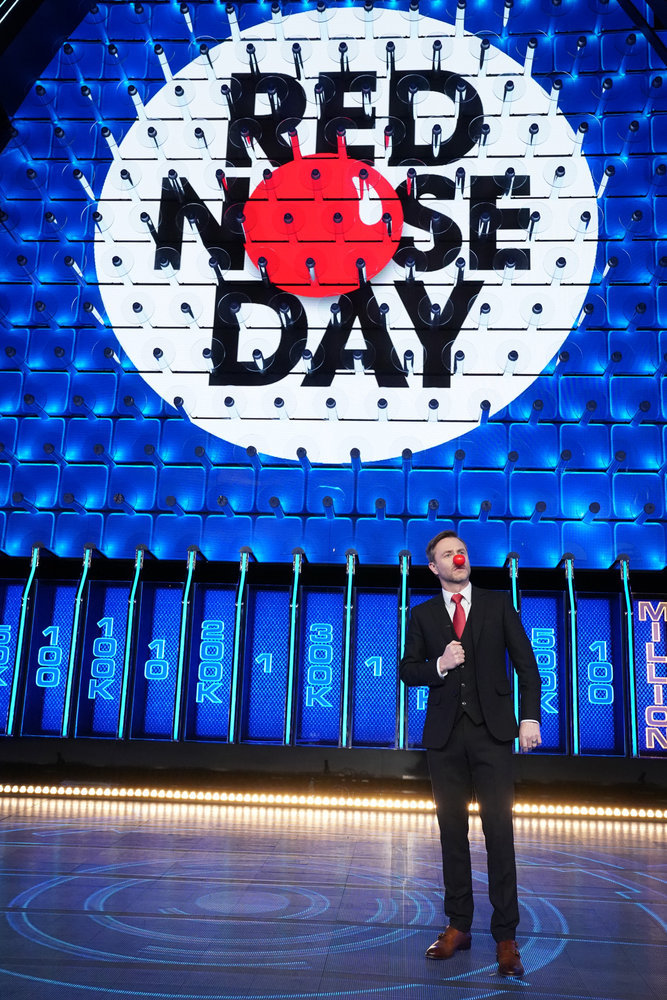 Red Nose Day will come to life with special edition of NBC’s ‘The Wall,’ hosted by longtime supporter Chris Hardwick

Comic Relief US, the organization behind the Red Nose Day campaign to end child poverty, has announced the return of the beloved fundraising event for its seventh year, culminating on Thursday, May 27. With supporters creating a powerful community of change, Red Nose Day has raised more than $240 million in the past six years and positively impacted over 25 million children in America and around the world.

Known for its iconic red nose and global reputation for using the power of entertainment to drive social change, the campaign has taken on even greater urgency this year due to the ongoing COVID-19 pandemic. Funds raised for Red Nose Day support programs to ensure that children who are living in poverty are safe, healthy, educated and empowered.

NBC’s special programming will be anchored by an exclusive, fast-paced Red Nose Day episode of “The Wall” at 8 p.m. ET/PT, hosted by Chris Hardwick, a longtime supporter of the campaign. “The Wall: Red Nose Day Edition” will feature a deserving, community-focused Houston family playing the riveting, high-stakes game to try and earn life-changing cash for themselves, while Hardwick cheers them on and raises money for Red Nose Day by testing his own skills on the wall. Viewers will have the opportunity to join in to help raise money for the cause during the show and learn how Red Nose Day funds help underserved children. The special episode will also feature surprise celebrity guests.

In addition to “The Wall: Red Nose Day Edition,” NBC will be activating a host of other programming features across the network and other NBCU Comcast properties in support of the campaign. The full programming lineup and additional participating talent will be announced at a later date.

Walgreens will once again show its commitment to communities with full store support for Red Nose Day, igniting its thousands of team members in more than 9,000 locations to support the campaign. Throughout April and May, Walgreens will celebrate Red Nose Day with the return of the iconic red nose in digital form, all in an effort to remind its customers of the impact they can make in their communities. With support from partners like Walgreens and their customers, money raised for Red Nose Day will help to provide food, shelter, medical care and, most of all, hope for underserved children in communities across all 50 states, Washington D.C., and Puerto Rico.

“Children who are living in poverty continue to be disproportionately impacted by the devastating ripple effects of the pandemic – even as things get better for some, many children and youth are at risk of being left behind,” said Alison Moore, CEO of Comic Relief US. “The return of Red Nose Day in 2021 is not only a powerful way to come together to make a life-changing difference for children, but also a much-needed beacon of hope. We're thrilled to have all our core partners return again this year, continuing their longstanding support for the campaign.”

“The NBCUniversal family is proud to continue to play a role to help end child poverty through our partnership with Comic Relief US,” said Doug Vaughan, executive vice president, special programs, NBC Entertainment. “Each year, without hesitation, our company looks forward to participating in this effort by bringing visibility and entertainment to support this incredibly worthy cause. We are truly honored to be the home of Red Nose Day.”

“More than ever before, Walgreens remains committed to improving the lives of children in need with critical funds and programs like Red Nose Day, which aims to keep them safe, healthy and educated,” said Patrick McLean, chief marketing officer of Walgreens. “We continue to be inspired by the generosity and passion of our team members, customers and vendors each year. While a donation to unlock a digital nose or shopping at Walgreens seem like simple gestures, we can drive meaningful change in our communities when we come together for a common goal.”

A press release noted, “Almost one year into the COVID-19 pandemic, widespread social and economic impacts have hit underserved communities the hardest – children in particular. Over the past year, hunger in the United States has reached levels not seen since the Great Depression; many more families have faced homelessness; and with schools operating remotely for much of the last year, children are suffering devastating ‘learning loss,’ only widening the learning gap between underserved children with less access to the necessary tools and technology to succeed, and those in more well-resourced communities.

“Since the pandemic began, Red Nose Day funds have provided critical support to those children most affected by the pandemic crisis and the nonprofit partners serving them. With the impacts of the COVID-19 crisis continuing to be felt across the country and around the world, and many families facing a long, steep road to recovery, money raised through Red Nose Day is more important and impactful than ever.”

In the six years since the campaign launched in the U.S., Red Nose Day has supported programs in all 50 states, D.C. and Puerto Rico, and in over 40 countries around the world helping to address both the immediate needs of children and young people and create long-term change to break the cycle of poverty and provide hope for a better future.

Red Nose Day USA is a fundraising campaign run by the nonprofit organization Comic Relief US, a registered U.S. 501(c)(3). Red Nose Day started in the U.K. in 1988, built on the foundation that the power of entertainment can drive positive change. To date, it has raised over $1 billion globally. Since its U.S. launch in 2015, Red Nose Day has raised more than $240 million to positively impact over 25 million children in the U.S. and around the world. Money raised supports programs that ensure the children who need it most are safe, healthy, educated and empowered. For more information about Red Nose Day USA and its impact, visit www.rednoseday.org. Follow @RedNoseDayUSA on Twitter, Instagram and Facebook.