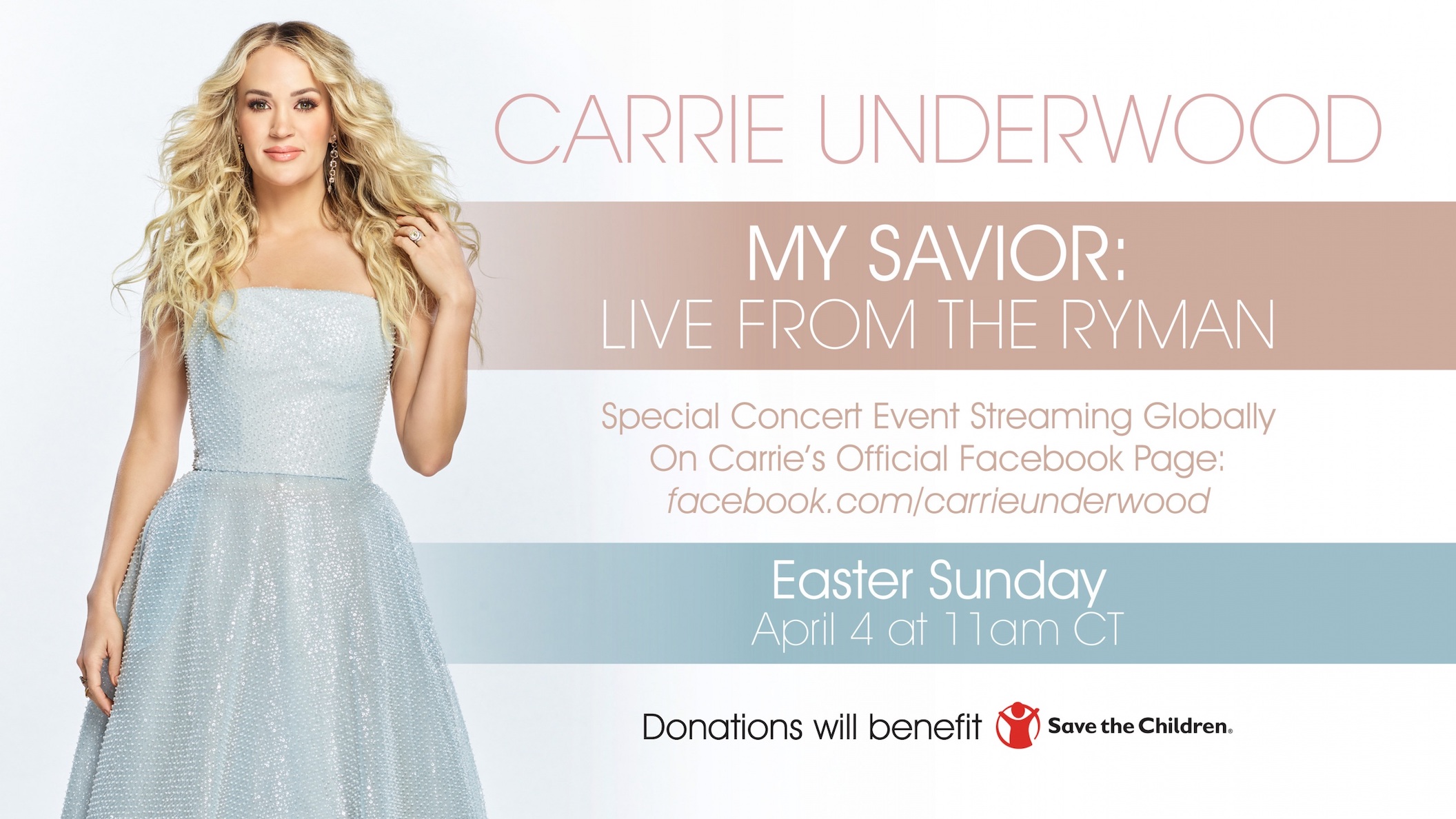 Seven-time Grammy Award-winner and three-time ACM Entertainer of the Year Carrie Underwood will bring her new album, “My Savior,” to life with “My Savior: Live From The Ryman,” a virtual live concert performance from the iconic, Ryman Auditorium in Nashville (also known around the world as the “Mother Church of Country Music.”)

Underwood will be performing the gospel hymns she grew up singing for this special concert event, which will stream live globally on her official Facebook page at noon ET on Easter Sunday April 4, with donations benefiting Save the Children.

The free event will feature special appearances by CeCe Winans, the best-selling and most-awarded female gospel artist of all time, who duets with Underwood on “Great Is Thy Faithfulness”; and singer/songwriter Bear Rinehart, frontman of the rock band NEEDTOBREATHE, who joins Underwood to sing on another traditional hymn, “Nothing But The Blood Of Jesus.” Southern gospel and harmonica legend Buddy Greene and 10-time CMA Musician of the Year Mac McAnally, both of whom played on the album, will also appear with Underwood.

“My Savior” consists of covers of some of Underwood’s favorite traditional gospel hymns in a unique pastiche of musical styles from classic country to folk, bluegrass and gospel. The album will be released globally on CD and digital March 26, and on vinyl April 30.

“My Savior” is co-produced and arranged by Underwood and David Garcia, with whom she co-produced her critically acclaimed 2018 album “Cry Pretty” – her seventh album to be certified Platinum or multi-Platinum by the RIAA. Garcia is a multi-Platinum-selling, four-time Grammy-winning record producer and songwriter.

“This is an album I have always wanted to record and I’m thrilled to be able to bring these uplifting, inspirational songs to life in this special way,” Underwood says. “It means so much to be able to bring this event to people in their homes on a day that holds so much meaning for us spiritually and to be able to raise much-needed funds and awareness for the incredible work of Save the Children as we celebrate the importance of family.”

Fans can RSVP via Facebook here. “My Savior: Live From The Ryman” will remain exclusively on Facebook for 48 hours.

Donations accepted throughout the streaming event, and for 48 hours after, will benefit Save the Children, which works in over 100 countries to ensure children grow up healthy, educated and safe. In the U.S., Save the Children reaches children through early education, literacy and child hunger programs, helps prepare children for emergencies, and responds when disaster strikes. To date, Save the Children has supported 30 million people affected by coronavirus around the world, including nearly 12 million children, making sure they have enough to eat, can access health care, can continue their education and are protected from violence. Before COVID-19, 1 in 7 children in the U.S. faced food insecurity, which has now increased to 1 in 4. Since March 2020, Save the Children has delivered nearly 21 million meals to kids in need across the U.S. For more information, visit www.savethechildren.org.

“When I set out to choose these songs, I wanted to include the beautiful, familiar hymns I grew up singing in church,” Underwood says. “There are several songs I have performed in the past, like ‘Softly And Tenderly,’ ‘How Great Thou Art’ and ‘Amazing Grace,’ that mean so much to me and I knew immediately we needed to record for the album. This music shaped who I am as a person and is the foundation of my career as a recording artist. I feel so blessed to get to share these songs with generations of people who love them as I do, as well as others who might be experiencing them for the first time.”

Other tracks on “My Savior” include beloved hymns “Nothing But The Blood Of Jesus,” “Blessed Assurance,” “Just As I Am,” “Victory In Jesus,” “O How I Love Jesus,” “Because He Lives,” “The Old Rugged Cross” and “I Surrender All,” all of which will be performed live by Underwood and her band and background vocalists on the legendary Ryman stage. The event will also feature a string ensemble and gospel choir.

Underwood emerged from the promise of her 2005 “American Idol” win to become a true multiformat, multimedia superstar, spanning achievements in music, television, film, and as a New York Times bestselling author and successful entrepreneur. She has sold more than 64 million records worldwide, recorded 27 No. 1 singles (14 of which she co-wrote), and has seven albums that are certified Platinum or multi-Platinum by the RIAA, all while continuing to sell out arena tours across North America and the UK.