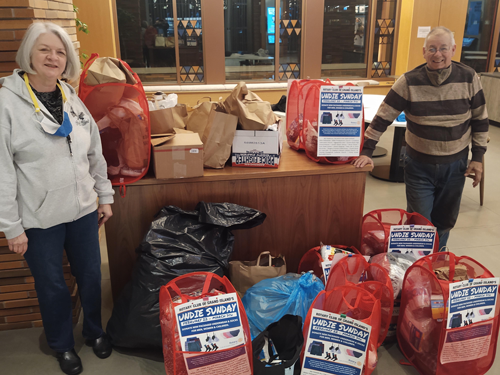 Sherry Miller, president of the Rotary Club of Grand Island, left, and member Michael Heigel, with all the donations to sort this week at the Visitor Center on Grand Island.

The beneficiaries of the donations to the 21st annual Rotary Club of Grand Island’s Undie Sunday were overjoyed with the many packages of new undergarments and socks to benefit homeless men, women and children in Niagara Falls, Buffalo and surrounding areas.

Also receiving seven bags of donated items was the Community Missions in Niagara Falls. Representatives of both organizations talked about the need for new, clean undergarments and socks for the homeless, who spend most of the day walking the streets. “These socks are so appreciated by them,” Grasso said.

Community Missions is so appreciative of all those that supported this drive,” said Christian Hoffman, Community Missions spokesman. “For two weeks the Rotary Club collected donations from Islanders at churches and businesses throughout the town in a promotion that fits perfectly with its mission of “Service Above Self.”

“We are blessed to live in a community which is so generous,” said Sherry Miller, president of the Rotary Club of Grand Island. “We had 15 locations which again supported hosting hampers for the collection of new socks and underwear. I would like to thank everyone: our hosts, the Rotary team who distributed the hampers, gathered them up and sorted them for the two missions. The missions are so appreciative of this drive we sponsor. Thank you, Grand Island.”