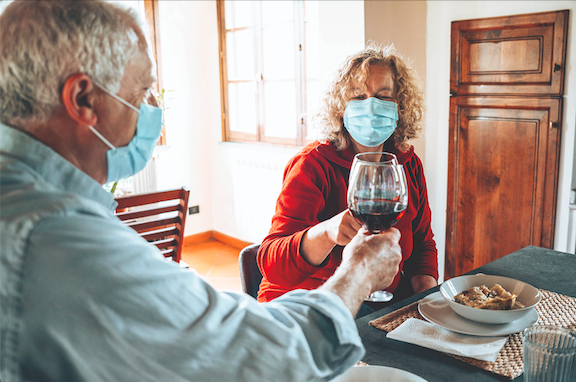 Gov. Andrew Cuomo on Sunday announced restaurants outside of New York City, which have been operating at 50% capacity, can now move to 75% capacity starting March 19.

A press release stated, “The data has shown restaurants can operate safely and in accordance with strict health protocols at 75% capacity. New York City restaurant capacity will remain at 35% capacity.”

In that same announcement, Cuomo said, "Our fight in the war against COVID-19 continues, but we are encouraged by the decrease in infection and hospitalization rates and the rise in vaccinations. As we expand our vaccine distribution and celebrate the arrival of the Johnson & Johnson vaccine, we have never been closer to defeating this beast once and for all. It is critical that New Yorkers not succumb to COVID fatigue and remain vigilant. Until the day the war is won, we all need to continue the practices we know work – washing hands, social distancing and masking up. The numbers are a reflection of our actions and when we work together, we will see the light at the end of the tunnel."

Speaking on a conference call, Cuomo said, “The numbers are down. When the numbers are down, we adjust the economic reopening valve. Connecticut is going to 100% restaurant capacity on March 19. Massachusetts went to 100% restaurant capacity on March 1. New York on March 19, same day Connecticut goes to 100, our restaurants outside of New York City which have been at 50%, will now go to 75%. That is everywhere outside of New York City.

“All the same safety capacities remain in effect, but we will go to 75%. (New York State Health Commissioner) Dr. (Howard) Zucker adds a caveat between now and March 19. If the numbers change, if something happens, if there is a downtown, then obviously we will adjust.
“With the new law that the Legislature passed (limiting the governor’s emergency powers), we will make this public – the Legislature has five days to review the change and we'll discuss it with any members of the Legislature or local governments who have issues. Legislature has the ability to cancel it with 50% of the vote.”

Cuomo and New Jersey Gov. Phil Murphy on Wednesday announced New York City and New Jersey will expand indoor dining capacity to 50% beginning March 19. Currently, New York City and New Jersey restaurants are operating at 35% capacity. and the rest of New York State is operating at 50 percent capacity. This follows Governor Cuomo's announcement that restaurants outside of New York City will expand to 75 percent capacity beginning March 19.
These capacity increases are part of both state's continued efforts to jump start their post-COVID-19 recovery and reinvigorate the economy. Since New York City indoor dining was reopened on Feb. 12, two COVID-19 incubation periods have passed without any significant rise in infection and hospitalization rates. This expanded capacity is subject to strict guidance, and state officials will continue to reevaluate the data.
New Jersey last expanded indoor dining on Feb. 5. During that time, the number of hospitalizations in the state has dropped by over 1,000 and has remained consistent.