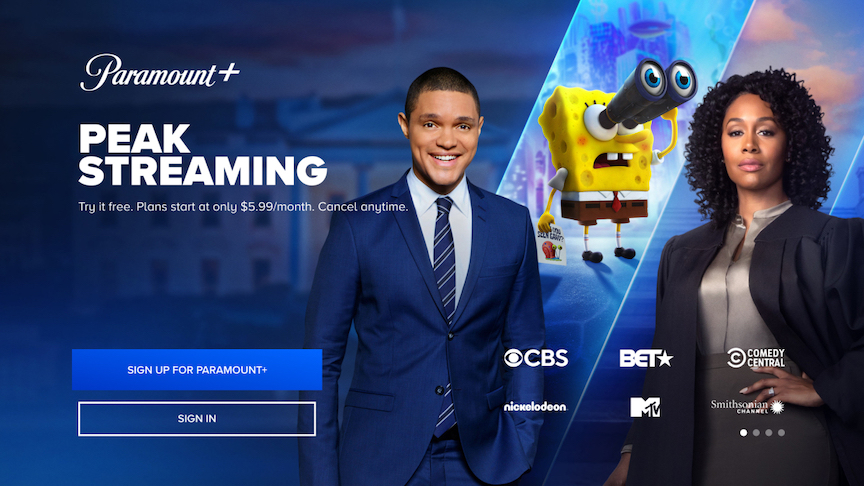 “The launch of Paramount+, which builds on our legacy of innovation and superior storytelling, is a significant milestone for ViacomCBS that demonstrates our commitment to being a global leader in streaming,” said Tom Ryan, president and CEO, ViacomCBS streaming. “By combining fresh original content with live and on-demand programming and an established library of titles from world-class entertainment brands, we have created an unrivaled service that offers live sports, breaking news and entertainment for all audiences.”

Premiering with the launch of the service is a slate of new originals, including “The SpongeBob Movie: Sponge on the Run,” the first-ever all-CGI “SpongeBob” motion picture event; “Kamp Koral: SpongeBob’s Under Years,” a prequel series and the first-ever spinoff of “SpongeBob SquarePants”; MTV Documentary Films “76 Days,” the Oscar-shortlisted documentary that looks at life in the earliest days of the COVID-19 crisis in Wuhan, China; “For Heaven’s Sake,” a docuseries blending comedy and crime for a unique take on uncovering the truth; “The Real World Homecoming: New York,” a reunion special with the original New York cast in the iconic NYC loft; “60 Minutes+,” a new form of the flagship series that reveals the stories behind the news through original reporting and captivating interviews; and “Stephen Colbert Presents Tooning out the News,” the second season of the animated daily news satire series.

These titles join a growing slate of originals currently on the service exclusively, including “The Good Fight,” “Why Women Kill,” “The Stand,” “Star Trek: Lower Decks,” “No Activity” and “Coyote.”

Coming this spring to Paramount+ is an extensive lineup of live sports, including every UEFA Champions League and UEFA Europa League match, culminating with the UEFA Champions League Final on May 29; coverage of the 2021 NCAA Division I Men’s Basketball Championship, featuring all of CBS’s games throughout the tournament highlighted by the National Championship game and Final Four with first-round coverage beginning on March 19; and CBS Sports' coverage of The Masters.

The Paramount+ slate will also continue to expand with 36 exclusive originals coming to the service in 2021, including the following titles that will debut this spring: “Rugrats,” an all-new series featuring Nick’s iconic babies, back together with the original voice cast and an all-new CG animation style; “No Activity,” a half-hour police comedy that will transition from live action to animated for season four; and “Behind the Music,” the groundbreaking and prolific music documentary series returns with several new episodes and the best of the vault remastered.

Beginning late spring, the Paramount+ film library will grow to over 2,500 titles, including recent hits from Paramount Pictures, such as “Bumblebee,” “Crawl,” “Dora and the Lost City of Gold,” “Gemini Man,” “Like a Boss,” “Pet Sematary,” “Playing with Fire,” “Rocketman” and “Sonic the Hedgehog,” as well as popular movies from MGM, such as “Bill & Ted Face the Music,” “Skyfall,” “The Addams Family,” “Child’s Play” and “Valley Girl.”

The reimagined service, built on the strong foundation of CBS All Access, features live linear programming, plus a deep and growing content portfolio that spans the best in scripted dramas, kids and family, sports, news, documentaries, comedy, music and reality.

√ A rich library of nearly 7,000 beloved kid’s episodes, including favorites from Nickelodeon and Nick Jr. such as “SpongeBob SquarePants,” “Teenage Mutant Ninja Turtles,” “PAW Patrol,” “Dora the Explorer,” “Blue’s Clues,” “Are You Afraid of the Dark?,” “Henry Danger and Rugrats: All Grown Up”; as well as Paramount+ originals, such as WildBrain’s “Cloudy with a Chance of Meatballs,” Boat Rocker’s new “Danger Mouse” and new editions of “Lassie,” “George of the Jungle” and “Mr. Magoo” from DreamWorks Animation’s Classic Media.

√ CBS programming, including primetime series such as “The Amazing Race,” “All Rise,” “Young Sheldon,” “Clarice,” “The Equalizer,” “Blue Bloods” and “Evil,” in addition to late night and daytime CBS shows. Plus, every prior season of 15 hit CBS series, including “Survivor,” “NCIS,” “Hawaii Five-0” and “Criminal Minds.”

√ Over 5,000 episodes from the biggest reality shows, including popular MTV series “RuPaul's Drag Race All Stars,” “The Real World,” “Teen Mom,” “The Challenge,” “Jersey Shore” and “The Hills,” among others.

√ A library of fan-favorite movies, including film franchises such as “Indiana Jones,” “The Godfather” and “Mission: Impossible”; comedies such as “Tommy Boy” and “Rat Race”; horror films like “The Ring” and “Pet Sematary”; romantic comedies such as “Failure to Launch” and “Kate & Leopold”; and classics like “Roman Holiday.”

√ Popular episodes from BET series, including “The Game,” “Real Husbands of Hollywood,” “Everybody Hates Chris” and “Single Ladies”; also documentaries from the Smithsonian Channel such as “The Green Book: Guide to Freedom,” “Disasters at Sea” and “Aerial America.”

√ Breaking news and impactful journalism from the award-winning CBS News team, including renowned CBS News programs, such as “60 Minutes,” “CBS Sunday Morning,” “Face The Nation,” “CBS Evening News with Norah O’Donnell” and “CBS This Morning,” plus live streams of local affiliates in over 200 markets across the U.S. and the 24-hour streaming news service CBSN featuring live, anchored coverage.

Paramount+ has two pricing tiers available to U.S. subscribers that marry live and on-demand programming. The premium tier, at $9.99, is available now and combines live sports, including NFL games, soccer and more; breaking news through CBSN; CBS' live linear feed; and commercial free, on-demand entertainment options spanning Paramount+ originals to the full suite of current and library shows and movies with 4K, HDR and Dolby Vision and mobile downloads. In June, Paramount+ will introduce a new ad-supported tier, at $4.99, that offers live NFL games, news and entertainment, but no longer includes local live CBS station programming. A $5.99 ad-supported tier, which includes live CBS programming, is available until June at which point only the $4.99 and $9.99 tiers will be offered to new subscribers.

A press release noted, “All Paramount+ subscribers will have access to a seamless user interface, enhanced curation and discovery, cross-platform dynamic play functionality, personalized homepages, content categories and central hubs for ViacomCBS’ brands. Additionally, each subscription option will include parental control capabilities and up to six individual profiles.”

Consumers can subscribe to Paramount+ online at ParamountPlus.com; via the Paramount+ app for iOS and Android; and across a wide number of platforms, including smart TVs, connected-TV devices, online, mobile, gaming consoles, and leading OTT providers. Paramount+ will also be distributed on major platforms in local markets internationally. For more details on Paramount+, visit ParamountPlus.com.