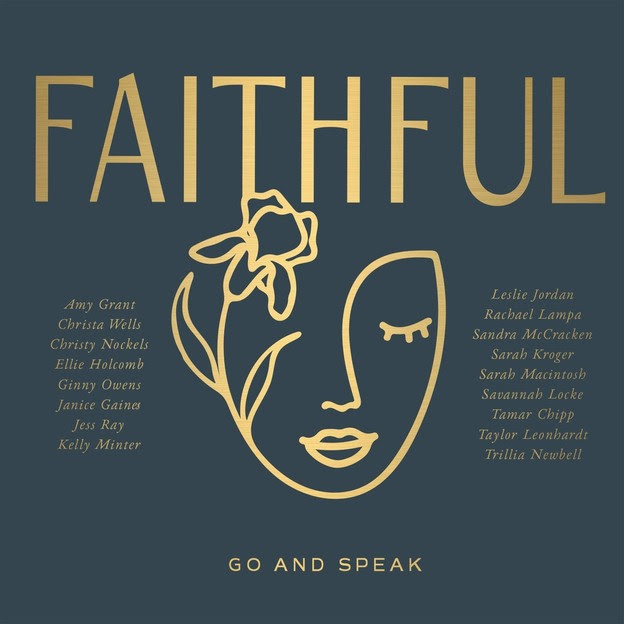 'FAITHFUL: Go and Speak' will release on April 30. (Integrity Music)

It was announced in January that the ministries of Compassion International, David C Cook, and Integrity Music would release the “FAITHFUL Project,” a collaborative project encapsulating a book, music and live events. The album, titled “FAITHFUL: Go and Speak,” is slated to drop April 30, while the “FAITHFUL” book will release May 1.

The “FAITHFUL Project” began to come to life in the winter before the pandemic when a group of well-known and respected authors and songwriters gathered as a community to write and share songs. Their work came to be known as “FAITHFUL”: songs and stories of God’s kindness to women throughout history and here with us now.

Today, "A Woman," the debut single from the 12-song album, is available on all digital platforms. The song features six-time Grammy Award-winner Amy Grant and multi-GMA Dove Award-winner Ellie Holcomb. A lyric video is also available and can be viewed below.

Along with "A Woman," each song on the special thematic album features a woman telling the story of God's faithfulness throughout scripture to the present day. The story of Mary Magdalene is shared in "A Woman" and was written by Holcomb, New York Times best-selling author Ann Voskamp, and artist Sarah Macintosh.

"Who knew that the deep, unspoken broken of so many years as a woman could be healed through this divine song that pulses with the heartbeat of the father for his daughters," shares Voskamp upon hearing the final recording of the song. "Who knew that the story, straight out of Scripture, of Mary Magdelene, set to song, could touch old wounds, change the refrain of a woman's heart beat now? Who knew how the heart was aching for the relief – and release – of this song? 'A Woman' is a song, a heart cry, a healing, for every woman."

Compassion International, David C Cook and Integrity Music, in partnership with Halogen Entertainment, will share the work of “FAITHFUL” as “an invitation to experience and celebrate the faithfulness of God like never before, with readers and listeners everywhere.”

As previously publicized, the “FAITHFUL” book is an eclectic collection of written stories, lyrics, photos and art created and curated by some of the most thought-provoking and influential Christian artists and authors of this time. Amanda Bible Williams, Kelly Needham, Minter, Lisa Harper, Raechel Myers, Ruth Chou Simons, Sally Lloyd-Jones, Sarah Macintosh, Voskamp, Owens, Locke and Newbell, along with an introduction by Grant, gathered to create this keepsake book that celebrates God and the enduring legacy of women in the Bible.

“FAITHFUL” will kick off with its ticketed livestream event in May, followed by a multi-city tour within the year, featuring the artists and authors involved in the project.

These events are being produced by Compassion LIVE, established in 2014 by Compassion International, which produces events that share the message of faith and impact the church for children around the world. For more information, visit FaithfulProject.com.