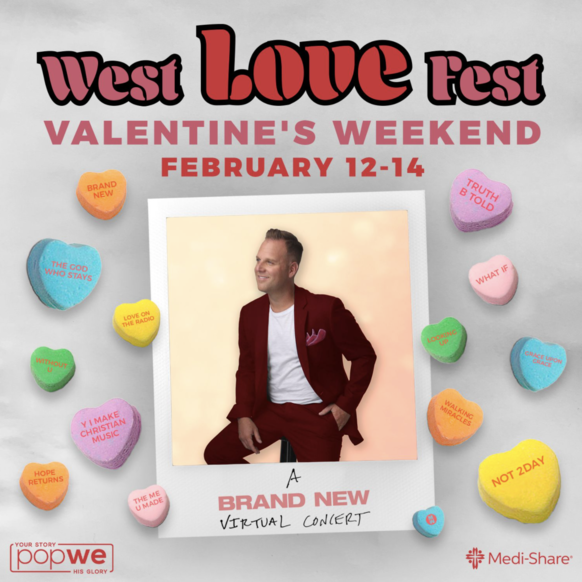 Five-time Grammy Award-nominated artist Matthew West will host a Valentine's weekend "West Love Fest – A Brand New Virtual Concert" Feb. 12-14. West and his band will deliver three nights of music, laughs and much more from his home studio, the Story House, in Nashville. This will also mark the first anniversary of his album, “Brand New,” which he will perform top to bottom including his No. 1 single, "Truth Be Told."

"A year ago, I was celebrating the release of ‘Brand New’ by filming a special at YouTube’s studios in New York City," West said. "2020 began with such excitement and anticipation of great things to come, but that brand new year sure felt old in a hurry. We’ve all experienced the heartache and pain that this pandemic has brought us. Now, I’m feeling like those two words, 'Brand New,' have taken on new significance as we all long for the day we can get out from this cloud we’ve been under. That’s why we are celebrating the one year birthday of these songs with a special virtual concert, playing the record from top to bottom. Although my band and I would much rather be performing in front of live crowds night after night, these virtual shows have become a really special way to connect with fans around the world and hopefully shine a little light into peoples’ lives."

In addition, West has been awarded his second RIAA Gold-certified single for the hit single, "Nobody" (Casting Crowns). As a co-writer and featured guest on the No. 1 single, West also received a Billboard Music Award nomination and GMA Dove Award nomination for this impactful song last year. West also co-wrote Casting Crowns' No. 1 single and Grammy-nominated song, "Only Jesus," that was also recently awarded RIAA Gold certification. These certifications are a testament to his songwriting success that also earned him the 2020 ASCAP Christian Songwriter of the Year.

West has also added podcast host to his list of skills as he launched his own show last year. "The Matthew West Podcast" recently surpassed 500,000 download in less than six months of launching on Annie Downs' That Sounds Fun Network. Shows over the past six months have included high-profile guests such as Cody Zeller, Emmanuel Acho and Dr. Dewin L. Gray, Maddie and Tae, Candace Cameron Bure, Lysa TerKeurst and Max Lucado. Click here to listen to this episode and other conversations.